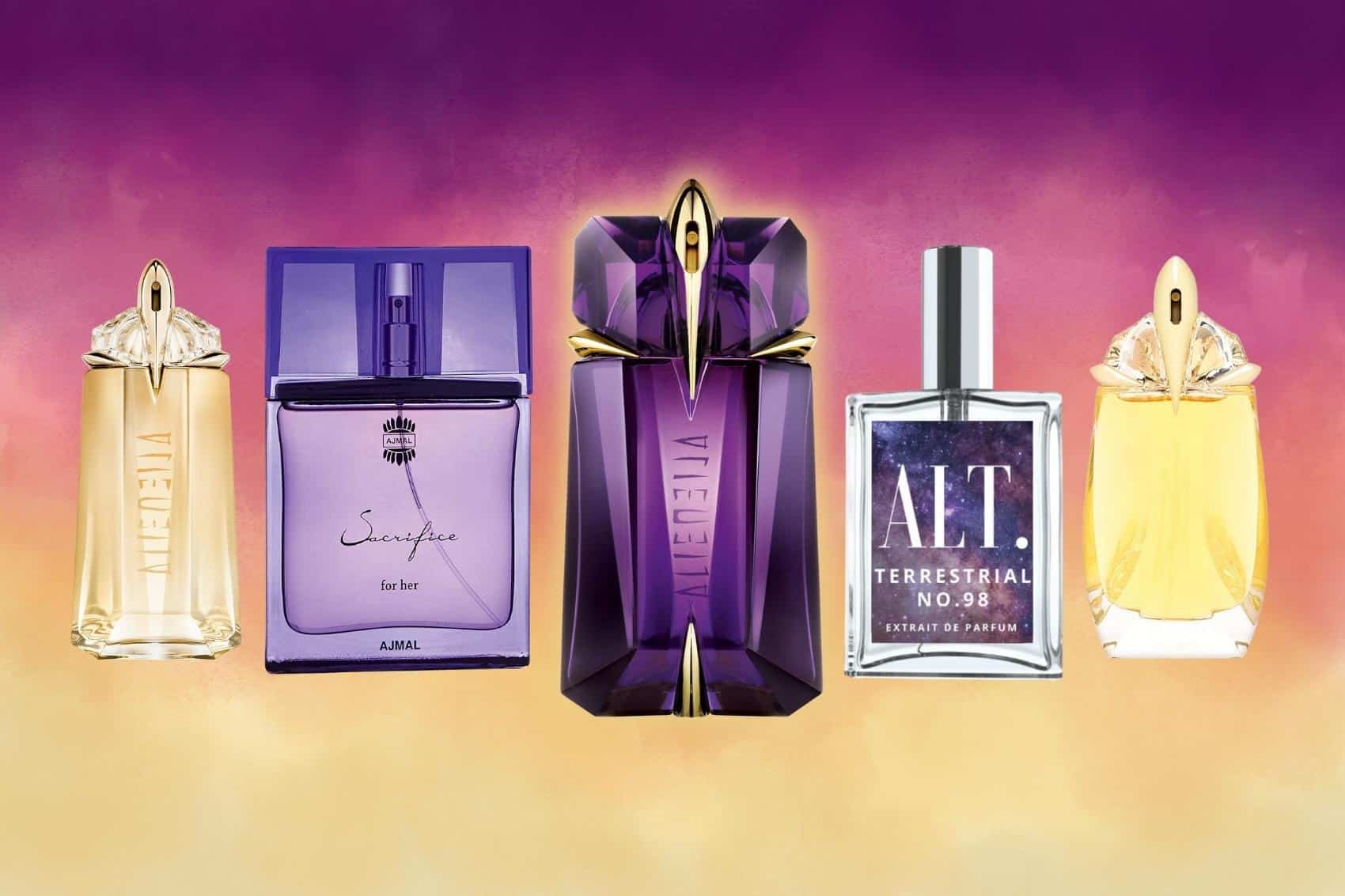 If there is one fragrance that stands out from all others in terms of being original, it’s Alien. I remember the first time I smelled it; my senses were overwhelmed and it was like NOTHING I had ever smelled before.

But of course, with the perfume’s popularity, it was only a matter of time before there were a whole host of Alien dupes and clones on the market.

Whether you’re looking for a more affordable alternative or simply want to experiment with similar scents without veering too far away from the original, there’ll be a dupe for you!

You can watch the video summary here:

What Similarities Are We Looking For In Alien

Following the huge success of Thierry Mugler’s Angel perfume from the 90s, the brand launched Alien in 2005. This is a white floral fragrance with a twist and the scent has one of the most unmistakable aromas of all women’s perfumes.

Alien features jasmine, woody accords, and amber to create a mysterious and almost dark fragrance that’s perfect for evening wear. If you’re looking for a dupe, you’ve got to get these notes spot on for the closest resemblance.

Much like many luxurious designer perfumes, you aren’t going to get your hands on a bottle of Alien if you aren’t willing to part with a good amount of cash. But since we’re in the middle of a global economic crisis, if you can save on fragrance, you’d be crazy not to! And that’s why a lot of people want to find a suitable dupe or clone of Alien.

For a 100ml refillable bottle of Alien EDP, you’re looking at around $130. OK, there are more expensive fragrances out there, but that’s still a decent amount of money when you’re living on a budget!

For a mere fraction of the cost of Alien, you can get this handbag sized rollerball perfume. What I like about this dupe is that it gets really close to the original scent with those heady amber, jasmine, and woody accords.

If it’s the long-lasting scent of Alien that drew you in, this one will certainly please you as, for a clone, it sits on the skin for a long time. That said, it’s not quite as intense and doesn’t project as well but for a top up later in the day, it saves spritzing more of your bottle of Alien than you’d like.

My favorite thing about Terrestrial is how strong the jasmine is. I’m a huge jasmine fan so this works well for me. But I have to warn you, this is much more intense than Alien so if you were looking for something more gentle, it might not be ideal.

For people that are looking for an Alien dupe that’s ridiculously close to the original, Terrestrial will not disappoint. Plus, it’s vegan and cruelty-free so it’s something we can all get on board with.

From the name, it may not seem like an Alien clone but once you smell what’s inside, it is definitely one. With exactly the same structure, you’d find it almost impossible to tell the difference when you smell Ambery Cedarwood alongside Mugler’s iconic perfume.

That said, there is slightly less intensity with this one but that’s not necessarily a bad thing. Many find Alien to be too overpowering so this is ideal if you want the same scent but a little more delicate. But while the projection and strength aren’t as bold as the original, you still get a long-lasting scent so it’s a win in my eyes.

There are so many companies springing up that are producing impressive copies of the world’s favorite perfumes. And if you ask me, Divain delivers. Their 091 dupe of Alien is pretty spot on.

It blends the exact same accords as Alien so you’re getting something that feels just like Mugler’s composition. Of course, you’re never going to get the intensity and longevity especially when you consider how cheap this is. But if you’re looking for something affordable that’s a direct copy, Divain 091 is what you’ve been waiting for.

One of the things that catches my attention about Alien are those beautiful floral jasmine notes. Jasmine is one of my favorite scents so I love that Catch Me is loaded with it. If you like that aspect of Alien, you’ll love this.

However, if you’re a fan of the amber side of the original scent then Catch Me might not be right for you as it’s very lacking in this area. I personally think that the orange blossom makes up for it as well as the rich woody notes at the base. Just keep in mind that Catch Me isn’t anywhere near as intense as Alien but it’s great as a light daytime fragrance.

Copycat Fragrances is a UK-based company that makes some seriously good perfume dupes. What you won’t get is an affordable copy because these scents are almost as expensive as the perfumes they’re imitating.

So why would you fork out for them? Well, they’re exactly the same, for starters. Inspired by Alien uses jasmine, amber and woody notes so you’ve got something that even a trained nose would find difficult to tell apart from the original.

What’s more, Inspired by Alien is intense, long lasting and just as well performing as what Thierry Mugler offers and it is ever so slightly more affordable.

Mugler has released a couple of flankers to the original Alien and I really like Alien Goddess. You’ve still got the jasmine and amber accords but this is a much sweeter, more tropical-feeling version of the original.

If you’ve gotten bored of regular Alien then this is a great way to nice up your scent. With tropical coconut and warm vanilla, this almost feels like a perfume you could devour (but don’t!) A lot of people compare Alien Goddess with the scent of sun tan lotion so it would be perfect for a holiday or summer outing.

I keep seeing The Essence Vault everywhere at the moment. Every time I jump on TikTok for a browse, there’s an ad for it coming up. And it’s not really surprising when you think about how well this copycat brand has done.

Where No 61 is concerned, you’re getting a very close dupe of Alien at a fraction of the original cost. What’s more, not only does it use exactly the same fragrance notes but this clone lasts just as long as Mugler’s creation.

The one thing that I should point out, however, is that there have been a handful of users that have complained about the perfume causing an allergic reaction. If you do have sensitive skin, it might be worth testing this one before dousing yourself in it!

9. Ajmal Sacrifice For Her

Just looking at the bottle of Sacrifice, you get Alien vibes with that rich, deep purple hue. But if you thought the packaging was convincing, wait until you get a whiff of what’s inside. Sacrifice brings together all the important facets of Alien and throws in an aquatic twist!

If you’re looking for something that gives a nod to Alien without being a direct copy, Sacrifice will suit you. That said, for fans of the intensity of Alien, this may not be the best choice as I’ll be honest, Sacrifice is pretty delicate and lacks the longevity of the original.

I remember someone gifting me a sample bottle of Eau Extraordinaire and I was super excited thinking it would smell exactly the same as Alien. But I was wrong. While Alien Eau Extraordinaire is also a white floral fragrance, it’s quite different from its older sister, and in a very good way.

If you’re tired of the unmistakable Alien scent then Eau Extraordinaire is a fresh, uplifting alternative. You still have those pretty white florals but they’re now alongside citruses. At the base, there’s still a prominent amber accord which is in keeping with the original without being exactly the same.

Of course, you have to keep in mind that, since this is also a Mugler product, you’re still going to have that high price tag.

One of the best things about Stars is that it’s potentially the most affordable Alien dupe out there. You can pick up a bottle for less than $10 but keep in mind that you get what you pay for. What this means is that Stars doesn’t project as well or have as long lasting a fragrance as the original. But as a purse spray, it’s perfect for topping up your scent throughout the day.

Stars does have pretty much the same fragrance notes including that all-important jasmine along with amber and woods. However, it does have its own character thanks to the addition of things like violet, spices and patchouli.

On A Final Note

Alien is one of the most unique and mysterious perfumes on the market right now. Despite being launched a good few years back now, it remains a go-to scent for a lot of women.

But let’s face it, Alien isn’t the cheapest perfume in the world so you might be trying to find a similar fragrance that won’t break the bank. Moreover, a lot of people are tired of smelling exactly the same as everyone else so it’s nice to find a perfume that has a similar character without being a direct copy of Alien.

I’ve discovered some brilliant perfumes that mimic our target scent perfectly. There are others that have similar notes but put their own unique twist on what is already a stand out fragrance. I’m sure you’ll find something you love within this selection. In the meantime, I’m off to enjoy wearing some of these delightful dupes and clones of Alien.