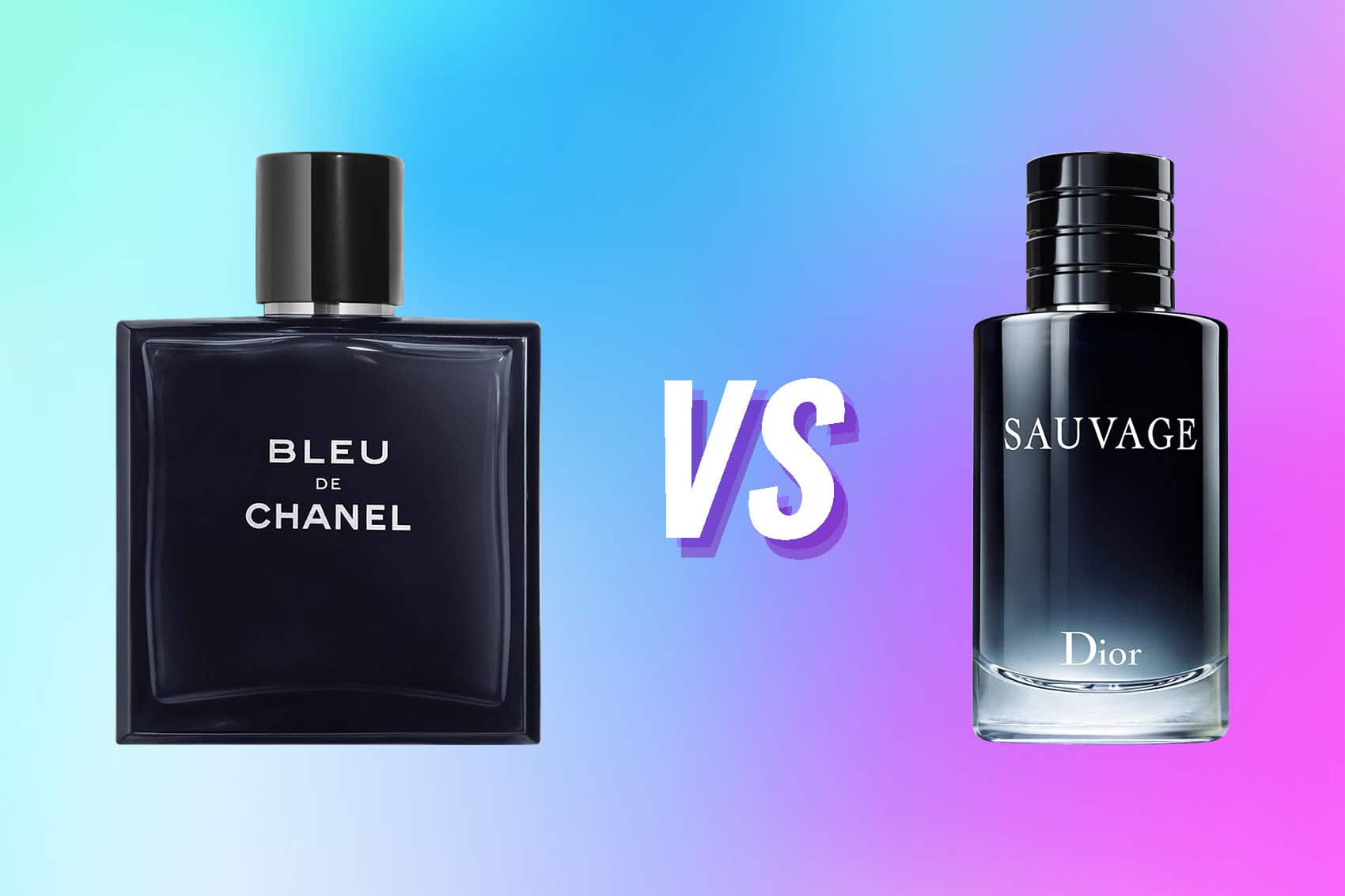 ‘Blue’ fragrances are easy to come by but few have been as well received as Dior Sauvage and Bleu de Chanel. If you’re looking to make a choice, both of these perfumes are on the top tier, but the similarities make it difficult to choose one.

In this article, I pitted them against one another and I’ll be giving you the lowdown on what to expect from each; the good, the bad, and the ugly. Alright, let’s get into it.

Chanel has a long standing reputation for producing fine fragrances and expert perfumer Jacques Polge has been helping the brand to stand out with his creations. Bleu de Chanel was one of them and since its launch in 2010 has become incredibly popular.

Bleu de Chanel is a woody aromatic fragrance that opens with a burst of citrus freshness with strong hints of grapefruit, lemon, and mint alongside the spiciness of pink pepper. As it begins to melt down, you begin to notice spicy heart notes of ginger and nutmeg paired with sweet jasmine and iso E super. This is a much less complex blend than Sauvage, and I love this simplicity.

At the base, Bleu de Chanel introduces us to a diverse range of notes that seem to work excellently together. Incense, vetiver, cedar, sandalwood, and patchouli sit with labdanum and white musk. The scent is, for me, classy and elegant at the same time as being sexy and seductive.

One of the things that makes Bleu de Chanel stand out to me is its immediately identifiable fragrance. It smells incredibly fresh and uplifting at the head but becomes much more subtle and warm as it dries down.

My Impression On The Performance Of Bleu de Chanel

I love that it isn’t cloying but projects well enough to gain attention. I get lots of compliments when wearing this and with the attraction it brings, I’d highly recommend this for a date night.

Bleu de Chanel is a versatile fragrance, which is why it’s so well-loved amongst fragrance fans. That’s also why there are so many clones of Bleu de Chanel.

While I’d say that it’s more youthful than Sauvage, you can wear it pretty much anywhere. For evening events and special occasions, the longevity of Bleu de Chanel is far superior. What you’ll notice more than anything is that it clings to your clothes and you can smell it for hours. However, on the skin, it fades disappointingly fast.

Another luxury French fashion and beauty brand, Dior, challenges Bleu de Chanel with the release of its own Blue fragrance, Sauvage, in 2015; five years after the launch of Chanel’s offering. Sauvage was created by master perfumer Francois Demachy and is an aromatic fougere fragrance that’s got plenty of similarities and differences with BdC.

Sauvage opens with a much simpler accord of bergamot and pink pepper. You’ll notice the combination and spice and citrus, much like Chanel. At the heart, Sauvage bursts forth notes of Sichuan pepper, lavender, pink pepper, vetiver, patchouli, geranium, and elemi. I notice its initial smell is slightly more complex.

What I love about Sauvage is it feels raw and sensual. It has a scent designed to invoke images of a rugged landscape and it does this effortlessly. Once it dries down, the composition becomes simple once again with cedar, labdanum, and ambroxan. This character lends this to being a slightly more mature fragrance, but it is versatile enough for younger guys too.

My Impression On The Performance Of Dior Sauvage

Speaking of versatility, Sauvage is an excellent everyday fragrance. It’s super easy to wear for work, school, lunch, or to casual drinks in the evening. That said, it’s not quite as intense as BdC so it doesn’t work quite as well for very ‘dressy’ events. It will project reasonably well and lasts on the skin but it doesn’t take long before it loses its intensity.

Sauvage really comes into its own after about an hour and you’ll get no end of people telling you how good you smell. The problem? There’ll likely be quite a few other guys wearing the same fragrance so if you’re looking for something unique, you’re in the wrong place. But that can be said for Bleu de Chanel as well.

My Overall Take On Dior Sauvage

Let me start by saying that I love both Bleu de Chanel and Dior Sauvage. While they are hugely popular and you will notice others wearing them, if you are looking for a signature scent that’s easy to wear, either would be an excellent choice.

One thing that most people ask when comparing fragrance is how much it’ll set them back. I won’t lie to you, these are luxury perfumes so they do come with a high price tag. But it depends on how much perfume you want as to what you’ll spend.

Dior is a clear winner when it comes to price, if you want something more affordable. But then BdC is far from being a rip-off since it’s an intense and versatile fragrance so you’re getting your money’s worth.

The scent notes found in both Bleu de Chanel and Dior Sauvage are quite similar but there’s definitely a marked difference between them that allows you to tell them apart.

In my opinion, BdC is much fresher at the opening whereas Sauvage has a clear peppery accord. While there are peppery notes at the head of Chanel, they’re vastly overtaken by the citrus notes. So, if you like a more fresh, summery fragrance, Bleu de Chanel might appeal to you. But for fans of warmth and spice, Sauvage is a clear winner.

There’s a degree of simplicity to the heart notes of Bleu de Chanel where the perfumer for Dior creates a much more complex combination of accords. Again, Dior leans much more towards being a peppery, spicy scent whereas Bleu de Chanel has a floral hit and a woody character thanks to the iso E super and jasmine.

It’s all a matter of opinion and many have said that because of the floral notes at the heart, BdC does feel a little more feminine. There’s floral notes in Sauvage too in the form of geranium but these are much less noticeable.

The scent of Dior Sauvage as it dries on the skin becomes warm, rich, and almost comforting. Much the same can be said about Bleu de Chanel but in a far more complicated manner. It would seem that the two fragrances switch between simplicity and complexity in different ways and the base of BdC certainly tests your ability to pick out notes.

It’s much more intense and diverse but with a sweet hit of white musk it again may feel a little too feminine for some. On the other hand, Dior Sauvage has a base that feels masculine, more wild, and enticing.

Bleu de Chanel and Dior Sauvage both perform well in different ways. Sauvage lasts much longer on the skin but doesn’t smell as strong as Chanel when sprayed on clothing. Moreover, Bleu de Chanel will project slightly better so it’s generally better suited to formal events and places where you want to stand out.

That said, neither of these perfumes is overly strong or in your face. They’re definitely intended more for spring and summer wear so are, by their very nature, much lighter. Neither of these would be strong enough to act as a pure winter perfume.

Both Dior Sauvage and Bleu de Chanel are much loved fragrances and receive many compliments.

When you wear Bleu de Chanel, you’ll feel elegant and sophisticated. There’s something about this scent that makes it feel extremely luxurious and I can almost imagine the likes of James Bond in his best tux exuding the aroma of BdC.

Sauvage, while a similar type of fragrance has a totally different character. Its very name means wild and there is indeed an animalistic vibe in the scent. It’s much more free and almost acts as if it doesn’t care what anyone thinks. I certainly feel liberated when wearing this, and people started asking about it because of the distinctive smell.

It’s difficult to choose between Bleu de Chanel and Dior Sauvage when it comes to versatility, as either fragrance would work excellently as a signature scent for pretty much any occasion.

As I’ve already mentioned, they’re not ideal as winter fragrances but throughout the warmer months, you’ll get a lot of use out of them both.

But if I had to choose, I’d lean towards Bleu de Chanel as being slightly more versatile. And that’s simply for the fact that it’ll wear well as a ‘dressy’ fragrance while Sauvage struggles a little bit in this aspect. It’s a close call, though.

There’s no denying that both of these scents have been iconic in their own right since they were released. However, Sauvage just pips BdC to the post if you’re looking for a timeless fragrance. Bleu de Chanel is definitely a more youthful scent while its competitor, Sauvage is more mature and can be worn by guys across the generations.

For this reason, a lot of men will choose this as a signature and stick with it for life. I can see Sauvage remaining just as popular as its 60s namesake for decades to come.

Can I compare the bottles of Sauvage and Bleu de Chanel? Not really. It seems that both fragrances have gone for a VERY similar theme here; luxurious dark blue glass bottles with extremely simple labeling.

If I had to choose a favorite in the presentation department, I’d edge towards Dior. The cylindrical bottle feels a little more high-end than the square flacon of BdC and the magnetic cap is a nice touch. But generally speaking, both would look great on the vanity unit in the bathroom.

It was a tough choice, but I have to say that I find myself enamored by the spicy fresh scent of Dior Sauvage. It’s a clear winner in my eyes. OK, it doesn’t project quite as well as Chanel and its versatility may be slightly less, but there’s plenty about it that sets it apart.

I just love how Sauvage feels both when I wear it myself and when I smell it on other people. It’s super masculine and makes you feel like you could take on the world. There’s something about it that one finds difficult to put into words but rugged and raw comes pretty close.

What’s more, it’s excellent value for money, so if you’re looking for an incredibly easy-to-wear luxury cologne for everyday wear, it won’t be beaten.

But what would work best for you? I think if you’re someone who wants to own a fragrance that you can use anytime, anywhere, then Bleu de Chanel might be for you. But if like me, you want a perfume with that bit of extra zing, then Sauvage will exceed your expectations.