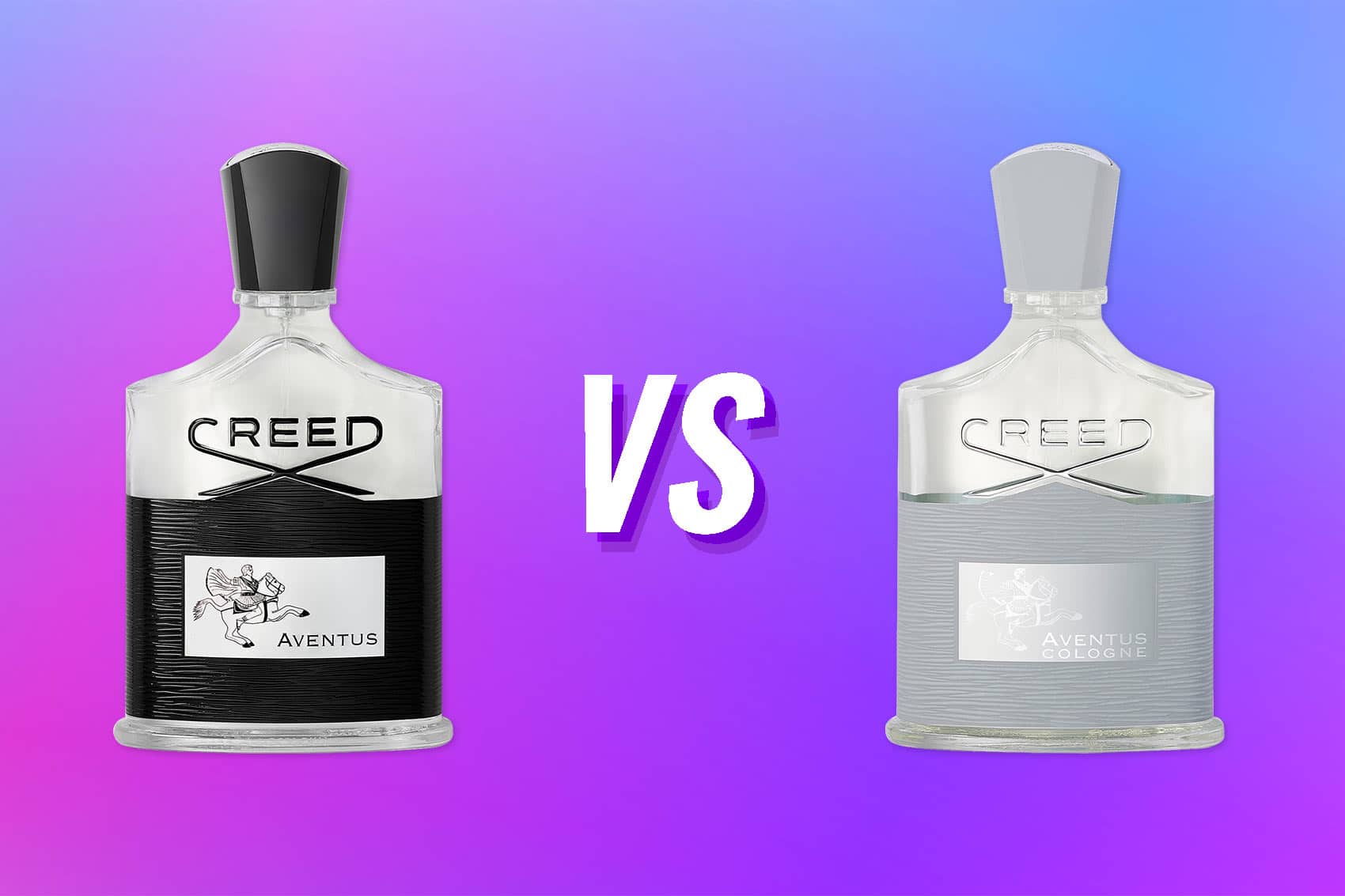 Aventus was a huge hit when it was launched in 2010 so, nine years down the line, Creed launched a flanker; Aventus Cologne.

Is it different from the original fragrance, or is it just a watered-down version?

Don’t be fooled, this isn’t some delicate nod towards the OG. Oh no, Aventus Cologne is a powerful EDT that screams to be recognized, just like Creed Aventus.

But which is better? Let’s take a deep dive and find out. I’ll compare Creed Aventus with Creed Aventus Cologne to see how different they are.

Creed Aventus is perhaps one of the most iconic men’s fragrances of recent decades. It’s a chypre fruity scent that was created by Olivier Creed who hand-picked only the finest ingredients. The brand explains that Aventus was designed to help men exude power, strength, and success. But does it achieve this?

Absolutely. Aventus is a hugely powerful fragrance and when you wear it, you’ll feel as though you can take on the world. But it isn’t cocky or arrogant. Instead, this is an elegant and sophisticated perfume that true gentlemen wear.

Aventus begins with notes of bergamot, pineapple, apple, and blackcurrant. If you like a fresh, fruity opening, this will appeal to you. The heart starts showing after around an hour, where you’ll find birch, patchouli, rose, and jasmine. The juxtaposition of fruity and floral is exquisite, and while you might think that makes it more feminine, this is a hugely masculine fragrance.

As it moves to the base, Aventus reveals sweeter notes of musk and vanilla coupled with oakmoss and ambergris. It’s a timeless combination that just works so well. So, how does Creed Aventus perform?

Well, if you like to stand out from the crowd then this is a perfume that should be at the top of your list. It’s loud and will fill a room in an instant. Even after just a couple of sprays, the sillage continues for a good few hours and the fragrance will last on the skin well into the next day. It performs particularly well on clothing too.

I love that Aventus is such a versatile fragrance. I could wear this all year round, although it’s fair to say that it becomes a little cloying in the summer. If you’re not afraid to make a statement, then go for it; otherwise, stick to winter wear. In terms of where you would wear Aventus; take your pick.

Some people find this to be better suited to evening wear but there are a lot of fragrance fans who would wear this as a signature. If you’re going to wear it during the day, then I’d suggest limiting how much you spray as a little will go a long way.

For me, Creed Aventus is a superior fragrance but not one that warrants such sky-high prices. Most people simply cannot afford to wear this as anything more than a special occasion scent, which is a shame since it is so nice. That said, the bottle does change from a black and clear square flacon to a cylindrical clear bottle engraved with silver or gold Creed logos when you buy the bigger sizes.

Then We Have: Creed Aventus Cologne

Creed saw such brilliant success with the original Aventus, despite its eye-watering price tag, so it isn’t surprising they launched the newer version, Creed Aventus Cologne, some years down the line.

Contrary to popular belief, this is anything but an eau de cologne. This title was merely given by the perfumer but it’s actually an EDP. It means that you still get the same excellent performance as the original but with a whole new character.

Aventus Cologne is an aromatic fruity fragrance and for me, it smells quite a bit sweeter than its older brother. Many say that this sweetness makes Aventus Cologne feel less youthful but I disagree. I feel that this is a more playful and easy-to-wear perfume that’s ideal for younger guys.

When you wear Aventus Cologne, you’ll feel less serious than when you wear Aventus. There’s something of a sexy vibe about it and it’s certainly a lot fresher. It begins with mandarin orange, pink pepper, and ginger; fresh and spicy all in one.

As we move through the heart, Aventus Cologne becomes woody and earthy with notes of sandalwood, vetiver, and patchouli. This is quite clever, as these are often used as base notes so it gives the perfume a very unique personality.

The base of Creed Aventus Cologne is very sweet with musk, tonka bean, and styrax coupled with the woody sweet freshness of birch. This base lingers for quite some time and while less cloying than the OG, it still makes a statement.

However, the versatility of this fragrance is slightly less and it’s much better as a summer fragrance. It’s not quite as intense so you may find that the projection is lacking during winter when your body heat isn’t as high. That said, spray it on clothes and it’ll stay there for what seems like an eternity.

I mentioned earlier that Aventus Cologne has a unique personality and that is true to a degree. However, I have heard a lot of people comparing it to Chanel Allure Homme Sport. I can see a few similarities but Chanel is far more citrusy and aquatic than Aventus Cologne so I don’t agree with this comparison.

In terms of price, Aventus Cologne comes in exactly the same options as its predecessor. Again, there are changes to the bottle when you start buying the more expensive sizes but overall, you won’t lose or gain anything money-wise by opting for one over the other.

Choosing between Creed Aventus and Creed Aventus Cologne is not an easy task. While these fragrances are from the same range, they share very little in common.

When it comes to the composition, the perfumer has done a great job of not simply copying the original when making the flanker. Their blend of notes is different, in my opinion. Which is better? It depends on what you like. For me, I love the classic, timeless fragrance of Creed Aventus. Aventus Cologne just feels a little too sweet for my nose.

Thinking about the price of both of these fragrances, you would expect the performance to be unrivaled. This is the case as both last very well on the skin and on clothing and will easily attract attention with an impressive projection. However, the original Aventus just pips its younger brother to the post. It’s much more intense and far more easily fills a room with just a few sprays.

I’d wear Aventus for a special occasion. Not just because I don’t want to pour all my money into maintaining it as a signature, but because it just feels special. When you wear it, you feel bold and confident and there’s an undeniable elegance that is difficult to achieve with other fragrances.

However, Aventus Cologne allows me to feel much more carefree and sexy. This is a much more modern perfume that’s so easy to wear. If you want a signature scent, I’d definitely tell you to go for Aventus Cologne. It’s easily the more versatile out of the two although it might struggle in cooler weather.

Creed Aventus comes in a black bottle with a black lid. There’s a clear portion at the top and imprinted in the black part is a horse and rider. There is no difference in the bottle design for Creed Aventus Cologne except that silver is used instead of black.

I don’t really think that these bottles do justice to what’s inside; they almost feel and look a little cheap to me. But, if you purchase one of the larger bottles then the packaging changes to something far more in line with a luxury brand. They’re now tall, elegant cylinders with the Creed logo etched all the way around in either a delicate silver or vibrant gold color. I prefer this design, but you’ll have to pay for it.

That brings me on to the price. It’s high. Let’s not dress up this fact. If you want to wear Creed Aventus or Aventus Cologne, you’re going to have to be willing to part with your hard-earned cash. Many agree, myself included, that it’s a little too overpriced. I do think the brand could get away with charging a high amount as these are very high-end perfumes but spending four figures on fragrance is just a bit too much for most people.

So, which is my overall winner? For me, I lean much more towards the original Creed Aventus. I love the elegance and sophistication of the fragrance and how I feel when I wear it. It’s powerful and strong, just as the perfumer intended so if you’re looking for something that’s on brief; this is it. It lasts ages and easily draws all the right kind of attention. Out of all the Creed fragrances, this is my go-to for sure.