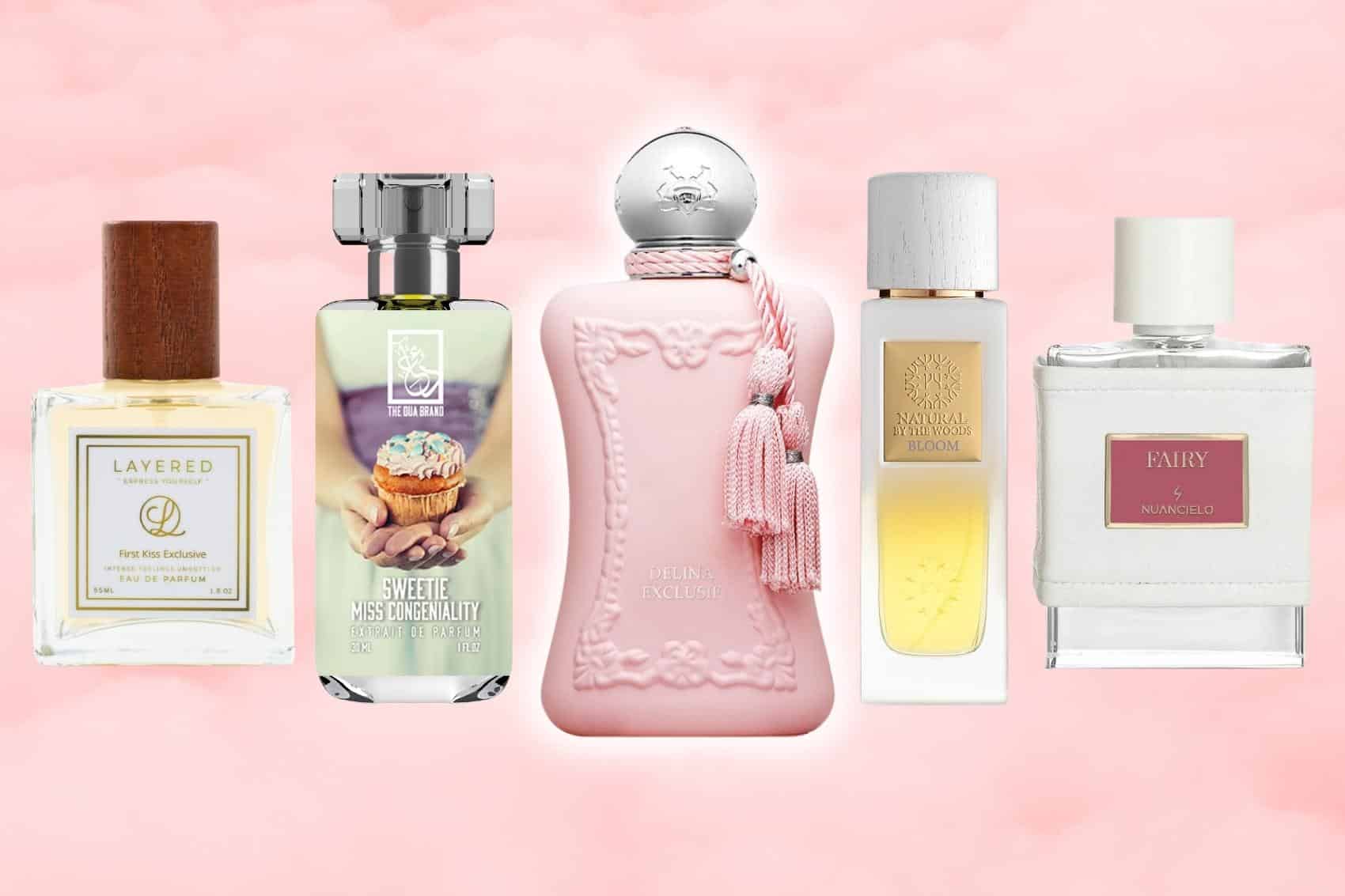 Delina Exclusif is a rose and amber-based fragrance created by Parfums de Marly. This fragrance is mysterious, and seductive and features notes of freshly bloomed roses, sweet litchi notes, and smoky vanilla. While this fragrance is universally appealing it also happens to come with a hefty price tag. This makes it unaffordable to many fragrance lovers who can’t get enough of this iconic scent. If you’re looking for a great fragrance option that’s similar to Delina Exclusif then you’ve come to the right place. I’ve rounded up ten great fragrances which embody a very similar vibe to Delina Exclusif.

Discover the closest Delina Exclusif perfume dupes in this video:

Delina Exclusif: What we’re Looking For

Upon first spray Delina Exclusif smells like an intoxicating combination of freshly bloomed roses paired with ripened fruit. As it starts to develop smoky notes of incense and oud begin to take shape. The dry down is slow and subtle throughout the day, however, it eventually settles into a warm base of amber, vanilla, and woody notes. While a fragrant rose heart remains at the center of this perfume, it’s not overbearing, making it a versatile option to wear at any time of day or night. While this combination of notes are often featured in fragrances intended for the spring or summer, I think it’s also a great option to wear during the wintertime. Now that you know what we’re looking for, let’s get started on my top ten list of fragrances you should try when searching for an alternative or dupe of Delina Exclusif.

Zara tends to do a pretty good job of creating fragrances that are affordable and can be easily layered to create your own blend or customized scents. I found Fashionably London to be pretty simplistic in terms of its formulation. To my nose, this fragrance contains a classic combination of rose and oud featuring a hit of bergamot notes when you first spray it. Fashionably London starts off slightly pungent, however, it softens up within minutes and transforms into a soft, office-friendly fragrance. I must say that Fashionably London is not particularly unique and seems to smell somewhat generic. When compared to Delina Exclusif, Fashionably London is quite underwhelming on its own. However, I think if you pair it with an amber or fruitier fragrance you could create something truly special and much more reminiscent of Delina Exclusif.

If you’re looking for something small and portable then Our Impression of Parfums de Marly by OilPerfumery might be the right one for you. Their oil-based perfumes are applied through a rollerball delivery system and are quite potent. You might want to be careful with how you apply this fragrance as a little bit goes a long way. The oud notes are very heavy with this dupe and they deliver a somewhat spicier vibe than Delina Exclusif. The amber and incense notes are also bolder than the original and the pear and litchi notes are much softer and less pronounced. While this fragrance does have a rose heart it is a bit more subtle than Delina Exclusif which might be a suitable option if you find rose notes to be a bit overwhelming at times. Give this fragrance a try if you’re looking for a compact and more portable dupe of Delina Exclusif.

3. Bloom by The Woods Collection

If you enjoy the fragrant combination of litchi and rose that Delina Exclusif features then you may want to check out Bloom by The Woods Collection. This unisex fragrance leans more feminine than masculine and opens up with strong rhubarb and litchi top notes. As it matures it reveals a fragrant floral heart that is a bit softer than Delina Exclusif. I found the rose and lichi notes to remain quite prominent as it settled into a soft and woody base of cashmere, musk, vanilla, and incense. To my nose the dry down is a bit spicy, however, this is likely due to the incorporation of incense notes. It smells fresher than Delina Exclusive and I get a bit of a crisp vibe as well. The sillage is quite strong and will definitely linger throughout the day. Overall, I think you should give Bloom a try if you’re looking for a fragrance with similar vibes to Delina Exclusif but for a much better value.

For a very close dupe of the original Delina Exclusif, you may want to check out DIVAIN-649 inspired by Delina Exclusif from Parfums De Marly. To my nose, this dupe has a slightly fruitier opening than the original. However, as it dries down it develops in a very similar manner. The base is soft and fragrant with a familiar musky amber vibe mixed with a hint of vanilla. I was impressed with this fragrance’s projection as it seemed to fill a room after just a couple of sprays. It’s somewhat intense but not overbearing as some rose-based fragrances tend to be. The sillage is moderate and I noticed that it seems to be a bit more subtle if you spray it on your clothes. Overall, I think DIVAIN-649 is suitable for daytime and at the office, but it could work as an evening fragrance too. The other difference I noted is that the litchi notes are a bit more muted and understated than those in Delina Exclusif. Overall, I think DIVAIN-649 is a decent dupe and you may want to give this a try if you love the original.

If you enjoy the sweet rose and litchi notes that Delina Exclusif is known for but you’re looking for something a little more gourmand and fruity then I suggest taking a look at Sweetie Miss Congeniality by The Dua Brand. This fragrance is inspired by both Delina Exclusif and Oriana and has a very sweet, more youthful vibe. At first spray the differences are almost immediate as fruity orange, citrusy grapefruit, and juicy raspberries fill the air. As it settles sugared marshmallow and whipped cream give this fragrance a much creamier accord than Delina Exclusif, however, it’s still mature and versatile enough to be suitable for all ages. While Turkish rose and litchi are notable as the fragrance matures and dries down they aren’t the main stars and serve more of a supporting role in this fragrance. Over time it eventually reveals a fragrant amber and woody base with soft vanilla notes that are more pronounced throughout the day. Its longevity is weaker than Delina Exclusif and it doesn’t project as well, but it might be a good option if you’re interested in something a bit more gourmand.

For a fragrance with a sweeter vibe that still incorporates elements of rose and litchi, be sure to check out Very Good Girl by Carolina Herrera. I found Very Good Girl to start off much more tart thank Delina Exclusif. This is likely due to the red currant notes featured at the top of the accord. However, after a minute or two the litchi notes become more pronounced and balance the tartness out pretty well. While it may not necessarily open up like Delina Exclusif, the similarities become more apparent as it dries down. The base is somewhat streamlined with subtle notes of vetiver and vanilla, making it a bit softer than that which is found in Delina Exclusif. It’s not as mature or heavy either, which could make this a suitable option for spring and summer seasons. The sillage is pretty strong with this fragrance and at a moderate price point, it’s not the most affordable either. Therefore, be sure to try this one out before deciding to commit to a bottle.

9. First Kiss Exclusive by Be Layered

If you’re looking for more fragrances featuring litchi notes to add to your collection, First Kiss Exclusive by Be Layered might be a good option to check out. First, I must mention that there are no rose notes in this fragrance. Instead, it features a familiar accord of litchi, Madagascar vanilla, oud, incense, and amber. The dry down is soft and eventually reveals a vanilla base that is subtle, yet sweet. There is a smokier vibe than that in Delina Exclusif which might be something to consider if you don’t care for smokier scents. Another thing to consider with First Kiss Exclusive is that there is a synthetic quality to the opening which is pretty potent and overwhelming for the first several minutes. While this chemical smell does eventually settle, it’s definitely something to be aware of. You might want to let this fragrance develop on your skin for a bit before leaving the house in the morning.

The last fragrance on my list of alternatives to Delina Exclusif is the original Delina by Parfums de Marly. Compared to Delina Exclusif, Delina starts off a bit more fruity with rhubarb, litchi, and bergamot prominently featured at first spray. As it moves through its accords the rhubarb seems to intensify which gives it a slightly pungent and bitter vibe while it dries down to reveal a deep rose heart surrounded by notes of peony, vanilla, and soft musk. Eventually it settles into a cozy base of cashmere, cedar, vetiver, and incense. To my nose, Delina is much sweeter than Delina Exclusif and strikes a delicate balance between being a fresh floral and a gourmand fragrance. Delina projects well and the sillage is pretty strong. The fruity notes seem to intensify in warmer weather too. Delina is more of a spring and summer fragrance when compared to Delina Exclusif and it’s better suited for daytime. If you love Delina Exclusif but are looking for something that’s much sweeter and less woody then give the original Delina a try.

On a Final Note

When choosing your perfect alternative to Delina Exclusif you want to keep two things in mind. First, the fragrance should feature a rose heart and litchi top or middle notes. Rose-based fragrances tend to develop differently depending on the temperature and your body chemistry, so be aware of this as you begin your search. Fruity top notes will usually create a similar opening while the rose notes should continue to develop and remain a focal point of the accord as it dries down. The base should be warm and feature a combination of woody, amber, and vanilla notes that continue to project moderately throughout the day. Keep these tips in mind while looking for your perfect dupe of Delina Exclusif and you’re sure to find the right fragrance for you.