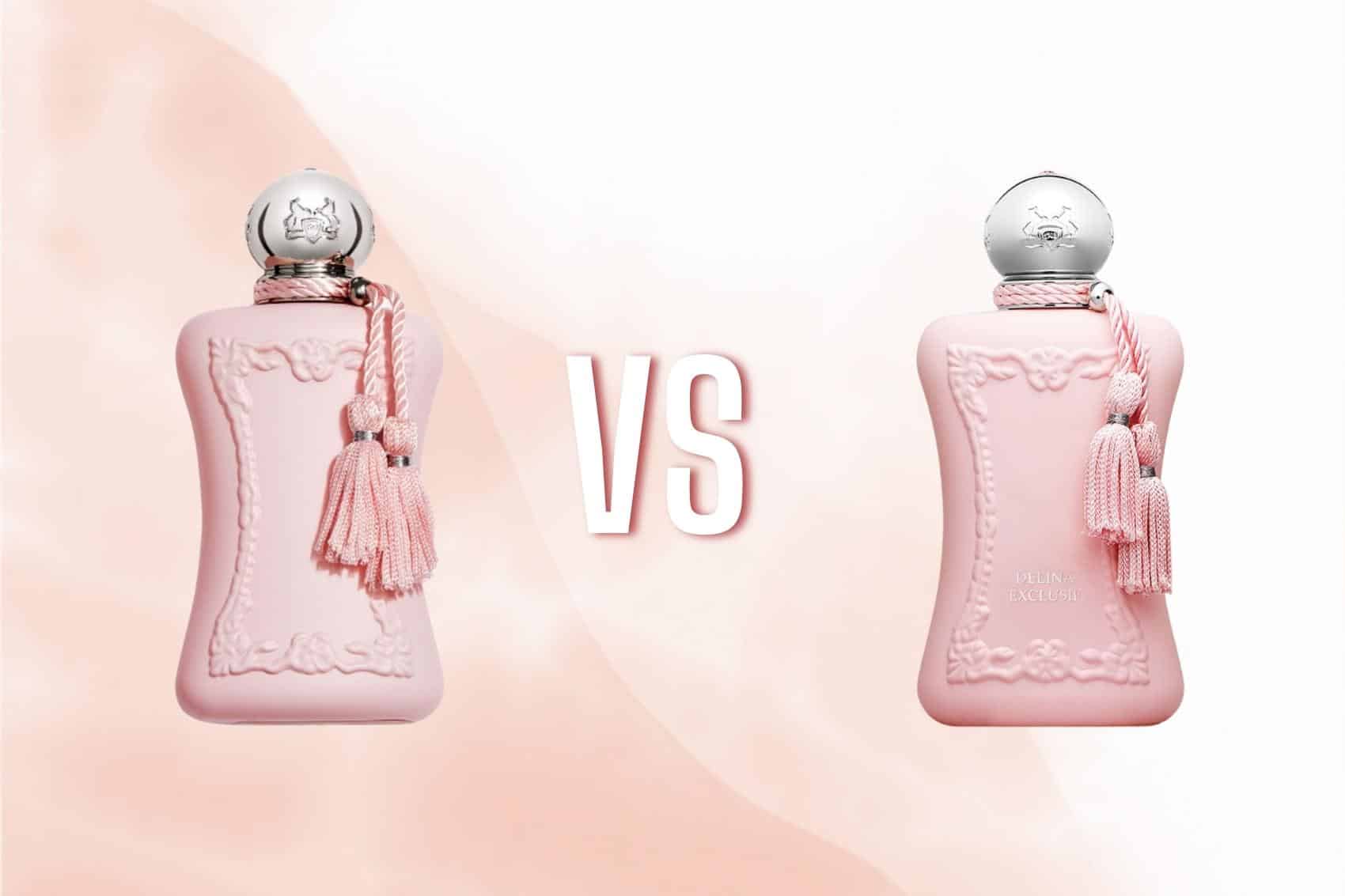 I’ve seen a lot of hype about the Delina and Delina Exclusif perfumes from Parfum de Marly. So many people are raving about how strong they are and, if you’re a fan of rose scents, they’re a must to add to your collection.

But as they say, the proof is in the pudding…or the spraying, in this case. So, I had to check out these two fragrances for myself.

While Delina is fresh, feminine, and floral, Delina Exclusif is warmer and has a more Oriental character. So which is best? Let’s compare Delina vs Delina Exclusif and find out!

Oh Delina! Aren’t you a beautifully feminine fragrance! This scent was launched in 2017 and was created by expert perfumer, Quentin Bisch. A floral perfume aimed at women, Delina is the epitome of girliness, captured in a baby pink bottle.

But what surprises me is that, while the bottle gives the impression of a youthful, fun-loving perfume, what you find inside is a stark contrast. You see, Delina is a much more mature fragrance that’s bursting with rose accords.

The top notes are litchi, bergamot, nutmeg, and rhubarb, while the rosy notes are at the heart along with peony, musk, petalia, and vanilla. But the sheer strength of the rose has caused a lot of people to say that this is more of a grandma’s perfume.

I can’t say that I agree entirely but I can see their point. Rosy notes have long been associated with older ladies and that’s OK. There’s a market for every fragrance but if you’re a lot younger, this might be a little ahead of your time. However, that mature character is softened slightly by the tang of rhubarb which, for me, really balances things out.

When you look at it objectively, Delina is a beautifully fresh and clean scent that performs like a dream. I haven’t seen longevity like this in a long time and with just two sprays, you’ve got 12 hours of fragrance that people will smell from a distance.

This strength and potency are off-putting to some but for those who like to make a statement, Delina’s going to do that for you! I think that, since it performs so excellently, the high price tag of $335 for 75ml is worth it.

In terms of how versatile this perfume is, I’d have to say not very. Being so floral, it’s probably not a fragrance you’d want to wear in winter. But its strength means that wearing it in summer can make it a little overpowering. Personally, I’d keep this for a special occasion and be done with it.

My Verdict On Delina

Do I like Delina? In short, yes. I love rosy perfumes, even those that might be better suited for older ladies. There’s something feminine and elegant about Delina that makes me feel graceful, attractive, and well taken care of. I’d almost say it was comforting.

While it might not be to everyone’s taste, there is no denying that Delina is an extremely well-performing perfume. Regardless of whether you like the scent, it’s amazing value for money if you want something that’s going to announce your arrival. For me, I’d wear this to a garden party or perhaps a summer wedding.

If you have already tried Delina and been put off by the ‘old lady’ smell then don’t be deterred from trying Delina Exclusif just yet. While there are still obvious rosy notes, they’re far less in your face and this feels like a much warmer, more youthful version of the original fragrance.

In fact, having been released a year after Delina, but by the same perfumer, you could be forgiven for thinking the two weren’t even related.

Delina Exclusif starts off with notes of litchi, pear, and bergamot so there are some similarities but not enough to confuse the two. Following that, there is rose, incense and, one of my personal favorite notes, oud. This gives it something of a more luxurious, Oriental vibe that’s nothing like Delina. The base notes consist of vanilla, amber, and woody notes so it stays just as warm and sweet as it dries down.

Again, Parfums de Marly has nailed it where performance is concerned. Delina Exclusif is another monster of a fragrance that’ll last way beyond 12 hours. What’s more, stand in a room full of people and they’ll all catch a whiff since the projection is enormous! While it is strong, Delina Exclusif can easily be worn for a multitude of occasions across the year. Although, I think with its warming character, it’s a lovely option for fall and winter.

You’ll pay a little more for this one at $357 per 75ml but I think that since the fragrance is a lot more versatile and you’ve still got strength, it’s certainly good value for money.

My Verdict On Delina Exclusif

I really like Delina Exclusif. It’s my kind of fragrance with those woody notes and oud alongside the freshness of girly rose. For me, this smells like ‘my scent’ and is likely something I’ll return to time and again.

It is a little pricier but, as I’ve mentioned, you get a great performance out of it and it’s versatile, so I don’t think you’d be wasting your money.

There is still something of a maturity about Delina Exclusif, but it’s nowhere near as prominent as Delina. I think for women over the age of around 25, this would make a perfect, elegant signature scent.

The Winner: Delina Vs. Delina Exclusif

Delina is a floral fragrance with a mature personality that’s better suited to slightly older women. On the contrary, Delina Exclusif is slightly more youthful but still elegant enough to be worn by all ages and this is thanks to warmer, less intense notes. I’ve heard a lot of people talking about how many compliments both perfumes get so I guess it’s really a matter of personal taste.

Both Delina and Delina Exclusif are super strong and super noticeable. You only need a couple of sprays of your chosen scent and you’ll be noticed across the room. What’s more, both of these perfumes will last well into the next day and potentially longer on clothing.

Price-wise, there isn’t much difference. Delina is the more affordable of the two but Delina Exclusif is a slightly more pleasing scent so I think that may be why the price is a little more. But where value for money is concerned, both offer it by the bucketload since there aren’t many fragrances that’ll outperform either of them.

I think it’s pretty obvious by now which of these fragrances I prefer. The crown has to go to Delina Exclusif. It’s just got that something special that makes it feel as though you’re wearing a luxurious gown, gliding through an Oriental palace.

It’s a bit of an exaggeration, I know but I like the idea that perfume can transport you to another way of life, if only for a moment. But Delina Exclusif doesn’t only last a moment since it’s so strong and that’s another reason why it is my winner.

That said, I cannot deny that the original Delina does everything you’d expect from a perfume. It’s pretty smelling and it performs well, but its less versatile and has a somewhat acquired scent puts it in second place.

What’s The Difference Between Delina and Delina Exclusif

The main difference between Delina and Delina Exclusif is the amount of rose in each. Delina is a perfume with heavy rose notes whereas Delina Exclusif makes rose more of an equal part of the larger composition.