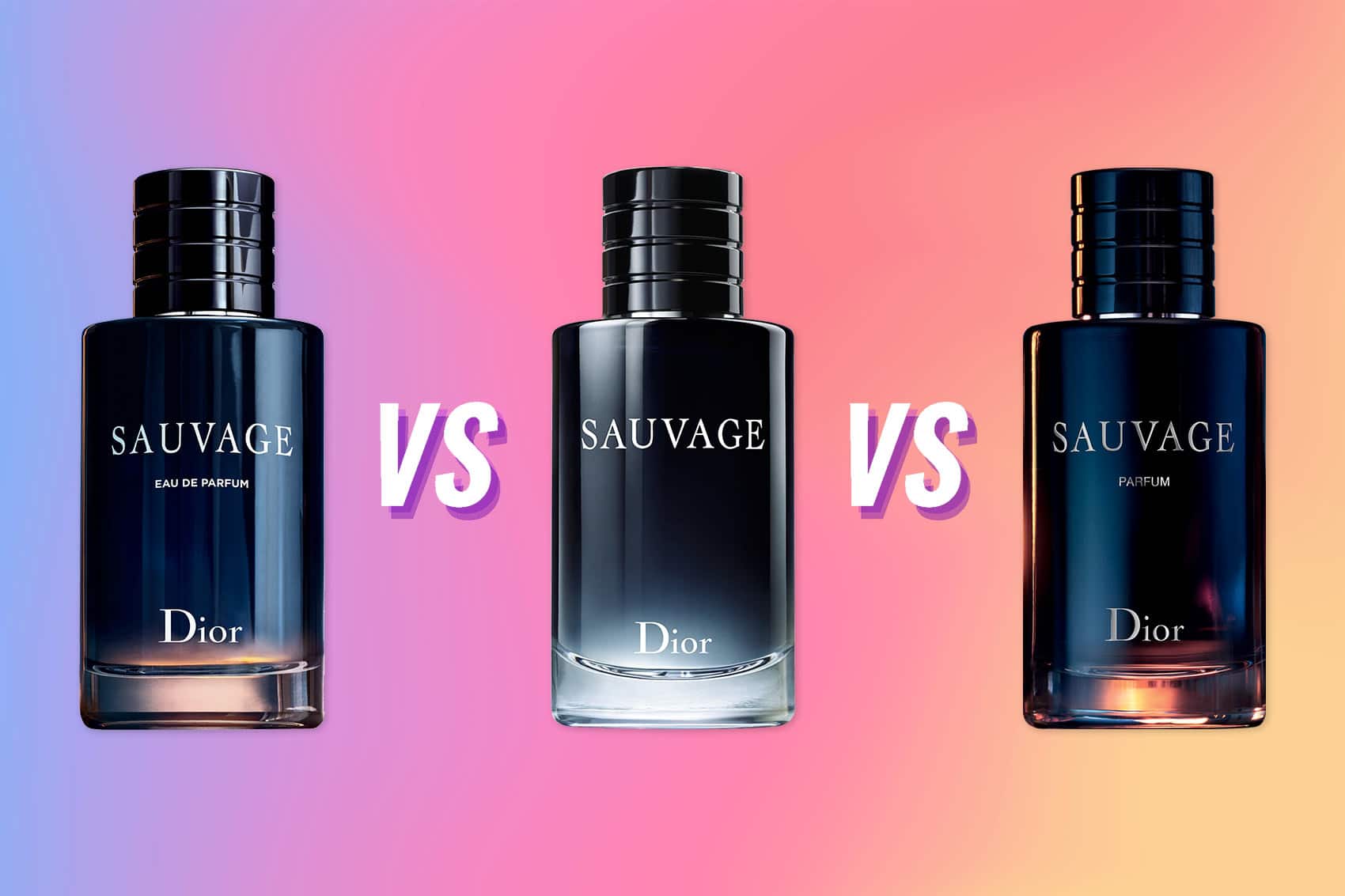 In recent years, there have been a few men’s fragrances that stand out from the crowd. The Dior Sauvage range of colognes is one of them.

These contemporary, classy fragrances of Dior have a fresh yet spicy character that is versatile enough to be worn by almost any guy.

Nevertheless, there are differences within the Dior Sauvage range that can make it challenging to choose.

In this guide, I will compare Sauvage’s EDT, EDP, and Parfum versions so you can decide which one is right for you. Read on to find out the final verdict.

Dior Sauvage EDT was launched in 2015 and is a creation by the in-house perfumer for the brand, Francois Demachy. This guy is credited with some of the biggest fragrances to come out of Dior including Miss Dior and Fahrenheit so we know from the off that he’ll get it right. And get it right he does with the EDT version of Sauvage.

I’ll explain why I believe this shortly, but first, allow me to tell you a little more about this cologne. Being an Eau de Toilette, this is the least concentrated of the Sauvage family but that doesn’t mean that it’s not worth your time.

Dior Sauvage EDT is an aromatic fougere fragrance for men with an incredibly fresh and raw character. The word sauvage means ‘wild’ in French and that’s exactly the vibe you get from this perfume.

It’s presented in a very classic-looking bottle that fades from a midnight blue at the top through to a smoky grey. Looking at the fragrance before smelling it, you’re led to believe it’s more of an evening scent but I think there’s a lot more versatility than appearance would have you think.

The beauty of Dior Sauvage EDT is that it can be worn for all occasions and by men throughout the generations. There’s no age limit and since this has become one of the most worn fragrances of recent times, it’s already demonstrated how it suits a fancy evening meal just as much as it does a day on the beach.

The freshness of Dior Sauvage EDT makes it more of a warm weather scent. However, there are some spicy, peppery notes that will allow you to move into fall with this still spritzed on your skin.

Sauvage EDT begins with the freshness of bergamot combined with peppery notes. This zingy beginning is followed by a complex heart that brings Sichuan and pink pepper together with lavender, vetiver, patchouli, geranium, and emeli. The base is warm and rich featuring ambroxan, cedar, and labdanum.
To me, Dior Sauvage speaks of a sensual yet incredibly sophisticated gentleman with dual facets to his personality. Since the blend is so versatile, this fragrance just as quickly says ‘I want you’ as it would impress at a business meeting.

My Verdict On Sauvage EDT

I think that for such a well-performing fragrance that lasts very well on the skin, the price is spot on. You’re getting excellent value for money and while the projection is delicate, it’s enough to get you noticed. The only real problem I see with Dior Sauvage EDT is that it’s so popular you won’t be expressing your uniqueness. But then popularity is good in some ways as it speaks volumes about the perfume.

I think Dior Sauvage EDT would suit someone who wants an easy-to-wear, everyday fragrance which is inoffensive yet smells beautiful. While it is great for guys of all ages, it definitely leans towards being a more youthful fragrance.

When you look at the bottle of Dior Sauvage EDP, it’s easy to think that it was just another bottle of the EDT. But look a little closer and you’ll see that giveaway pinkish/orange hue at the base that tells us this is a new fragrance.

Sauvage EDP is an amber fougere fragrance launched three years after the original in 2018. It was designed to be a new interpretation on the EDT so you’ll see some similarities but also a uniqueness that makes this one stand out from its older brother.

Once again, Dior Sauvage EDP was crafted by Francois Demachy who uses many of the same notes including bergamot in the opening. However, it’s missing those peppery accords in the first spritz and so this one isn’t quite as zingy and many say it loses its ‘blueness.’

You’ll still get that hit of Sichuan pepper and lavender but it’s now accompanied by spicy nutmeg and star anise. The middle notes are somewhat different and the blend is far less complex. This, to me, makes Dior Sauvage EDP smell like a much more mature fragrance suited to well-established gentlemen.

As Sauvage EDP dries down, a much sweeter base comes through that prominently features vanilla as well as ambroxan for that warmth. This warmth is similar to the EDT but something about it makes the whole perfume smell much more sophisticated. I can almost imagine this on a silver fox sitting in a darkened jazz club sipping on an aged whiskey.

What I also love about the EDP is that it’s far more versatile than the EDT. The blend of notes makes it ideal for wearing year-round so you won’t need to worry about finding a signature for each season, should you fall in love with this one. Moreover, it’ll work well for a whole host of events and since the projection is just as delicate, it’s not going to offend anyone.

That said, I’ve heard a lot of people saying that, after wearing this for some time, it’s easy to go nose blind so you’ll find yourself spraying copious amounts. But don’t be fooled, a few sprays are more than enough and when you go over the top, that’s when it goes from intoxicating to offensive, so that’s something to be mindful of.

My Verdict On Sauvage EDP

In my opinion, Dior Sauvage EDP is an excellent choice for the more mature gentleman who wants to get on the Sauvage bandwagon but with a more mysterious air. I have to point out that this fragrance is markedly more expensive than the EDT, which is a downside. Overall, I’d say I am impressed with the EDP and its subtle differences.

Dior Sauvage Parfum is the most highly concentrated of the Sauvage family and yet surprisingly, that doesn’t boost the cost. If you like a perfume that’s a little more intense but don’t want to pay big bucks, this might be for you.

While there was a significant gap between the release of the EDT and EDP, only a year passed by until the Parfum was launched in 2019. With Francois Demachy at the helm once more, it’s no surprise to learn that the composition doesn’t deviate too much from the original. This amber fougere fragrance is a very outgoing and confident perfume that isn’t ashamed to stand out.

It seems to me that it doesn’t quite have as good a projection as the EDP but lasts incredibly well on the skin. It’s a perfect perfume for date night and intimate moments and since it is designed to intoxicate, this further proves how good it is for such an occasion.

But that’s about where the versatility ends. Unfortunately, Dior Sauvage Parfum isn’t quite as well suited to all occasions like its EDT and EDP counterparts. This is a much warmer, richer fragrance with heavy Oriental vibes.

Dior meant to show a blend between freshness and warmth and it does this, but the warmth is evidently more apparent. Wear it in fall and winter and you’ve got it spot on.

The opening of Dior Sauvage Parfum has the original freshness of bergamot combined with mandarin orange and elemi. If we look back, elemi features are at the heart of the EDT but not in the EDP, so this one leans just a little more to the EDT in terms of similarities.

The heart is unlike any other fragrances within the Sauvage family and simply provides you with a beautiful burst of sandalwood. While at the base we have the same sweet vanilla as the EDP coupled with warm, sweet tonka bean and olibanum. To me, it smells like cozy evenings by the fireplace or coming in from a crisp autumnal walk in the woods.

My Verdict On Sauvage Parfum

Out of all of the Dior Sauvage fragrances, the Parfum is the least versatile. That could be problematic if you’re looking for a signature scent you can stick to. However, if you want a cologne you can wear occasionally, I’d say this was pretty perfect.

What’s great about Dior Sauvage Parfum is that it has a very different character that doesn’t make it feel as though you’re just wearing another of the same perfumes. Even better, it’s excellent value for money as you don’t need to pay much more than the EDP, despite the higher concentration.

The Dior Sauvage collection of men’s fragrances is designed to release the wild, raw character that each of us has hidden somewhere deep within. The idea of having a range of takes on the original gives us a chance to release this character in our own way.

Although each of these fragrances performs well in its own way, some things stand out. For example, I love the blend of notes in the original EDT which is incredibly versatile and yet everything goes together perfectly. Not only this, but the unique composition makes this an unmistakable fragrance.

Out of all of the Sauvage fragrances, I’d have to say that the EDP boasts the most superior performance. None of the scents are extreme in their projection but the EDP certainly outdoes the other two here. Not to mention that it lasts an incredibly long time without the need to reapply.

When wearing the EDP, you’ll instantly notice the compliments flooding in. This is a mature, sophisticated fragrance that just makes you feel a million dollars. While the other two colognes will turn heads, I personally think there’s just something about the EDP and its simple composition that makes it stand out that little bit more.

Dior Sauvage EDT is one of the most versatile fragrances within the collection since it can be worn for almost any occasion. The problem is that it’s only really suitable as a summer fragrance owing to its freshness. Flip everything over and look at the EDP which is excellent for year-round wear and can be worn as a daytime or nighttime fragrance, and you’ll see why I think that it boasts the best versatility.

There’s very little doubt in my mind that Dior Sauvage EDT is the most timeless of the collection. It’s the original, and many would consider it to be the best. This is a fragrance that’s never going to go out of fashion and is suited to guys of all ages. Not to mention, it’s certainly the best value for money out of all the Sauvage colognes.

All things considered, I’ve been very impressed by all of the Sauvage perfumes but I think that the EDP just pips the others to the post. Why? Well, it’s incredibly versatile, long-lasting, and has a composition that’s just a little more sophisticated and suave.