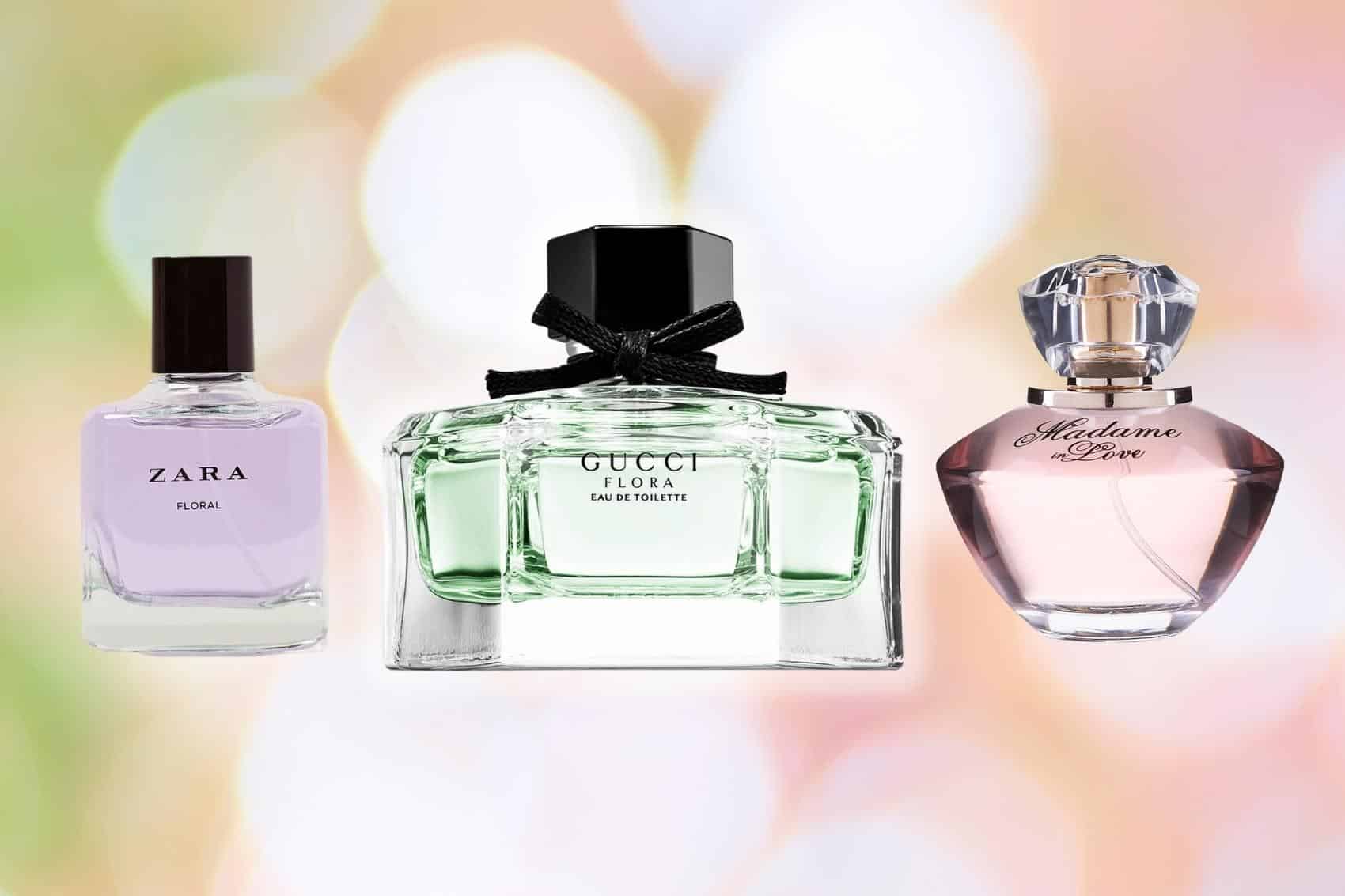 For fans of floral fragrances, Gucci Flora has been one of those go-to scents since its release. Though it contains many of the same characteristics as traditional floral perfumes, it has its distinct character.

But if you’re tired of wearing Flora or want something a little less expensive with the same smell, there are plenty of cheaper alternatives. Yet I have noticed how clone houses seem to be making hundreds of copies of Gucci Bloom and not so many of Gucci Flora.

Still, I’ve found quite a few affordable, almost exact copies as well as perfumes that are merely along the same lines as Gucci Flora. I’ve put them all in one place for you here.

What Similarities Are We Looking For In Gucci Flora

Gucci Flora was launched in 2009 and is a bright floral fragrance that’s been a huge hit among perfume lovers. When I’m looking for a good dupe of Flora, I look for perfumes that stay with a similar fragrance composition.

Flora is made up from peony, citruses and mandarin orange at the head. The heart notes include rose and osmanthus while the case boasts pink pepper, sandalwood and patchouli. This is a relatively standard blend for a floral fragrance but that doesn’t mean that Flora doesn’t have an unmistakable scent.

So, thinking about this, I expect a dupe to have that same instantly recognizable aroma. What’s more, since Flora is a very long lasting fragrance with a decent intensity, I want a clone that’s going to perform just as well.

One of the only clone houses that does a viable copy of Flora is the Oil Perfumery and even their take on it is not exact. But that’s because it is replicating the 1966 version of the fragrance although you will still find many of the same scent characteristics.

There’s still the gorgeous floral accord of rose and peony and you get that earthy patchouli hit at the base. Other than that, this perfume certainly has its own character so it’s something a little different.

I do like how well this one stays prominent once you apply it. It is an oil so it’s probably much more concentrated, which also explains the heavy trail it leaves.

Zara has launched some stunning dupes, and Floral is no exception. I mean, you couldn’t get any more obvious with the name, could you? That said, the composition does differ slightly from the Gucci Flora but not by much.

You’ve got all of the most important notes like rose, patchouli and citruses but Zara puts its own spin on the original by adding things like musk, amber, and vanilla. It is a markedly sweeter perfume.

I was surprised at how well Floral stayed on my skin for a high street scent. A few sprays in the morning and you’re good to go. It isn’t as intense as the original but that doesn’t matter if you’re only looking for an everyday fragrance.

Fortunately, I was able to find another clone house that makes a Gucci Flora dupe and that was Divain. I’ve been impressed with their clones and 171 is no different. I love that the fragrance has captured the freshness of the original Floral and shares many of the same notes.

However, it does replace mandarin orange at the head with tangerine, while the osmanthus is replaced with sweet olive. But these make up a similar scent and the difference is barely noticeable, especially to an untrained nose.

What I really love about this one is how strong it is. It’s far more intense than Flora which is great news since I like a perfume that really stands out from the crowd and makes a noise.

If you are looking for a perfume that is similar to Gucci Flora without being an in your face copy then I think you’ll like City Blossom Rooftop Peony.

This is a fragrance that has a lot of the same notes but puts its own twist on the fresh floral perfume by adding things like raspberry, blackcurrant, and apple blossom. These accords turn this into a much fruitier composition. If you like a sweet hit, you’ll love this.

Where longevity is concerned, City Blossom Rooftop Peony is on par with our target scent. It’ll last all day with ease, as it should since this is also a designer fragrance.

I have to admit that I was a little skeptical about Dzintars Parfum as it was a brand I was unfamiliar with. However, I was delighted to discover that this is actually a very high quality perfume that performs beyond anything I expected.

Gucci Flora, to my nose at least, is a very intense perfume so when I sprayed this one and it was just as strong, the first checkbox ticked off. The intensity of the rose notes are particularly strong so if this is a scent you find pleasing, you’ll probably like this perfume.

I also noticed how Dzintars Parfum was very similar to Gucci Flora despite the fact that several of the notes are different. You get the peony, osmanthus, rose, and pink pepper but there’s no patchouli nor any citrus notes and sandalwood. Yet it still manages to smell remarkably similar.

I recently purchased a miniature set of Versace perfumes and one of the bottles was Bright Crystal. For a floral scent, I have to say that I much prefer Versace Yellow Diamonds but Bright Crystal is much closer to Gucci Bloom.

It isn’t as cheap as some alternatives but it’s much more affordable than Gucci, that’s for sure. What’s more, you’ve got notes of peony which really lend this to being a similar fragrance. But let’s get one thing straight; this doesn’t aim to be a direct copy.

In fact, I highly doubt that Versace created this to be anything like Flora, it just so happened to end up being similar. If you like those fresh floral scents then this will make a nice change.

Arc en Ciel makes a wide range of dupes and I love No 24 for how well it mimics Gucci Flora. It is missing a couple of prominent notes such as mandarin orange and pink pepper. But other than that, it’s a very close match, and you get that same fresh, floral character.

But what makes No 24 from Arc en Ciel stand out more than anything else is how intense it is! I mean, it’s rivalling Gucci and then some with its strength. As for how long it lasts, just a couple of sprays and you’re good to go for the day. You won’t be worried about having to top it up.

OK first things first, how cute is the bottle for this perfume? I am in love with it and it’s a great one if you want something that’ll take pride of place on your dresser. But more than just looking the part, Madame In Love is an excellent copy of Gucci Flora.

One thing I did notice is that, while it does have the same composition, there is the addition of fruity notes. If you’re a fan of something a little sweeter then you might prefer this over Gucci Flora.

But don’t get too excited if you were hoping for an extra long lasting fragrance as the one thing that lets Madame In Love down is its longevity. You will need to pop the bottle into your bag for later in the day, which is a little disappointing.

I’ll be honest, the bottle for this looks like a cheap knock off of a Tom Ford perfume. So I wasn’t expecting anything special when I tried it. However, Peonia Splendida is a pretty close match to Gucci Flora and much cheaper.

The key notes such as rose, osmanthus, woods and patchouli are all there as well as that spicy pink pepper. I won’t lie, the performance is nowhere near as good as the original but if you want an affordable alternative for everyday use, Peonia Splendida will serve its purpose well.

I invite you to try Flora Gorgeous Gardenia, a perfume similar to Flora but has something a little different that you won’t find in Flora. It is a flanker of the original and stays with the same theme but is a tad sweeter.

That sweetness comes from a pear blossom at the head where brown sugar replaces sandalwood in the base. Honestly, I prefer this one over Gucci Flora, especially because of the intense white florals at the heart.

On A Final Note

For fans of floral fragrances, Gucci Flora has been one of those go-to scents since the day it was launched. Though it contains many of the same notes as other floral perfumes, there is a noticeable difference.

But if you’re tired of wearing Flora or want something a little less expensive with the same notes then there are a world of clones out there.

I’ve found some affordable, almost exact copies as well as perfumes that are merely along the same lines as the original. I’m sure you’ll discover a new scent that you fall in love with without moving away from Gucci’s classic perfume.