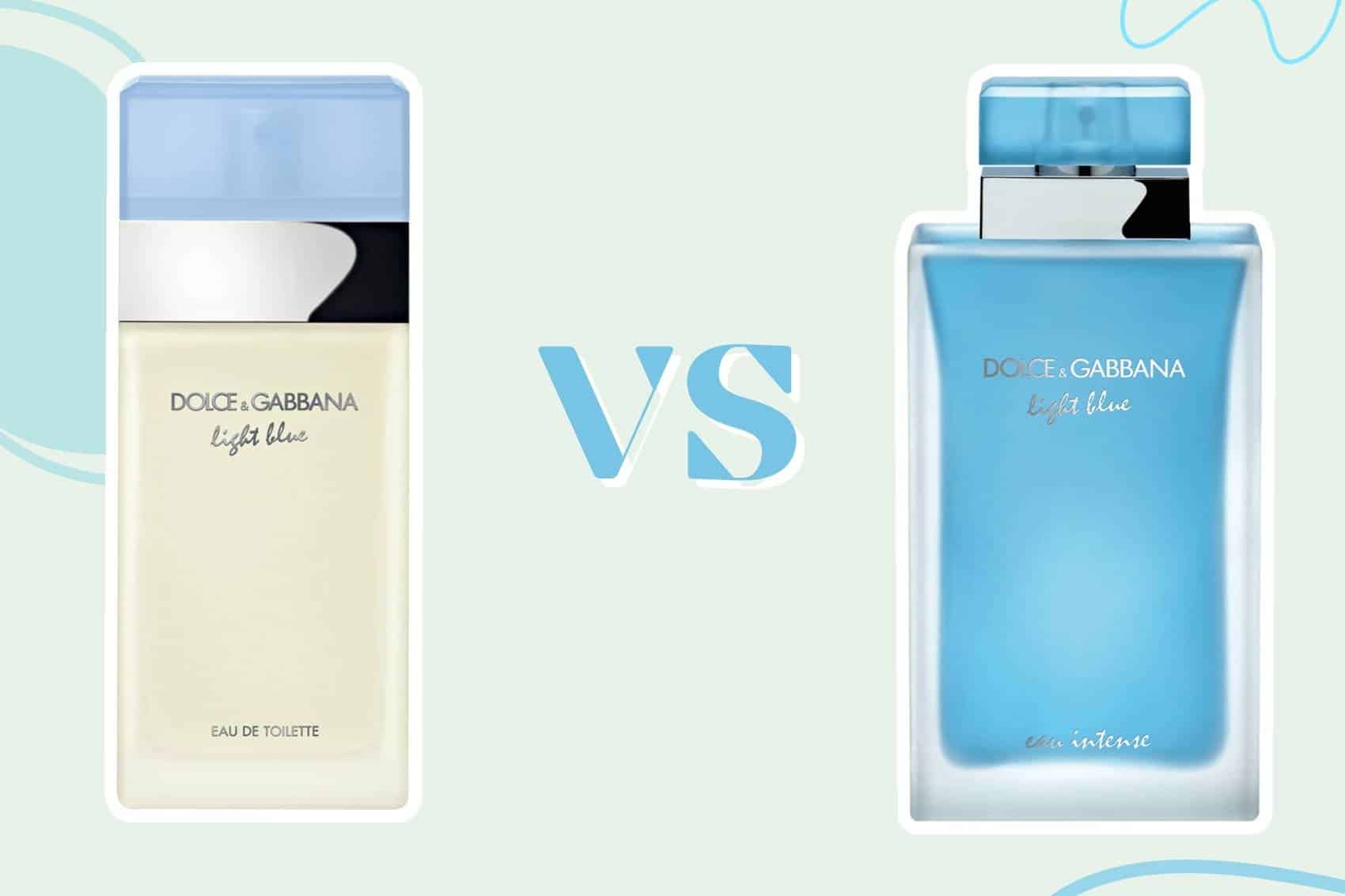 I was always a huge fan of Dolce & Gabbana Light Blue back in the early 2000s. There was something super easy about this scent that made it ideal for almost every occasion. But then in 2017, the Intense version came along and blew my socks off with its striking similarities but contrasting character.

So, I found myself asking; which is better? Light Blue or Light Blue Intense.

I’ve pitted both of these scents against one another, and it’s a close call. If you want to know which of these delightfully refreshing perfumes to invest in, keep reading. Here’s what you need to know.

Oliver Cresp was responsible for creating the now iconic fragrance, Light Blue, back in 2001. This scent I vividly remember smelling EVERYWHERE as it became a real hit with young women. One of which I was at the time!

Floral fruity is the best way to describe the scent. While there are hints of jasmine, white rose, bellflower, and even bamboo, I can tell you that Light Blue is far more fruity and zesty than that description would have you believe. There are bright hits of lemon and green apple at the head and these linger throughout, even as the woody cedar and sweet notes of amber and musk come through.

One of the things that really made Light Blue a success, in my opinion, is how easy it is to wear. It’s got a very distinctive scent. Despite being a fresh citrusy perfume, of which there are many, it manages to stand its ground and has become somewhat unmistakable.

Moreover, Light Blue isn’t an offensive perfume and boasts a moderate projection that’s ideal for everyday wear. It’ll certainly be noticed without taking over and that’s what a lot of people look for in a fragrance.

The smell kind of reminds me of sitting on a breezy beachside sipping cocktails or browsing through boutiques in a quaint Italian town. There’s something luxurious about it without being pretentious so it feels accessible to anyone.

If you’re looking for a summer fragrance then Light Blue is right up there with the very best. It sits beautifully on the skin during the daytime and has a wonderful sunny charm. However, I wouldn’t say it was intense enough to be worn in colder weather neither does it have the character of a winter perfume as there’s simply not enough warmth.

Some designer fragrances can easily break the bank but D&G’s Light Blue is great if you’re on a budget. You can pick up a 1.6 fl.oz bottle for just shy of $55. For that price, it also makes a great handbag spray.

My Verdict of Light Blue

I love Light Blue. It played a significant role in my fragrance journey back in my younger days and I just can’t let it go. Objectively speaking, it’s probably not for everyone as I have heard some people talk about how it is a little headache inducing. And that’s not because it’s overly intense but the combination of notes can be somewhat nauseating to certain noses.

However, if you’re in love with the scent like I am then this will easily become one of your go-tos. That said, I’m not going to suggest it if you want a strong, outgoing evening fragrance as this just isn’t it. Light Blue is the perfect summer daytime spritz, especially if you’re going on vacation. But nothing more.

It’s not often that perfume houses leave it so long to make a flanker but in this case, we had to wait a whopping 16 years to get our hands on the newer version of Light Blue known as Light Blue Intense. Launched in 2017 and created by the same perfumer, Light Blue Intense is something of an upgrade on the OG. At least, that was the idea, although my own opinion differs slightly.

But for now, I’ll try to remain impartial as I get you better acquainted with this scent. Light Blue Intense features some of the same fragrance notes as the original including lemon and apple as well as jasmine and musk. However, many are missing and we have the addition of marigold and amberwood.

If you were hoping for a rehash of Light Blue then you’ll be sorely disappointed. You can see how this is a very similar fragrance but the smell is something quite different. Light Blue Intense is a much richer fragrance that many would say is more well balanced so you don’t get that blast of citrus that you do with the 2001 fragrance.

Many have described Light Blue Intense as being very masculine and I am inclined to agree. While I is advertised as a woman’s scent, it does have a real manly vibe. Could it be unisex? Absolutely!

Light Blue Intense has a very uplifting scent and it reminds me of being in an expensive restaurant at lunchtime, looking out over a harbor. Picturing a guy wearing this, I could easily see him in a navy-tailored suit and crisp white shirt. It’s that kind of fresh, enticing fragrance.

As a woman, you may feel that you can’t pull this off because it is so masculine but keep reminding yourself that it is designed for us girls! Plus, if you want something totally inoffensive then Light Blue Intense is perfect. Some say it smells a bit like cleaning spray but even if that is what your nose detects, well, that isn’t unpleasant.

Just like Light Blue, Light Blue Intense has a moderate projection. The versatility makes it ideal for wearing to work and for things like running errands.Yyou could almost get away with wearing it for special occasions as it has that extra bit of pzazz that the original is lacking for evening use.

So, what will you have to pay for the privilege of owning a bottle? The good news is that Light Blue Intense is also not a super expensive fragrance, although it is a little more than Light Blue at around $80 for 1.6 fl.oz. It’s decent value for money for a perfume that performs well and smells pleasant enough.

My Verdict of Light Blue Intense

OK, I won’t say that I hate Light Blue Intense. But I will say that it’s not as appealing to my nose as the original. That’s largely because it doesn’t feel unique.

Back in the day, Light Blue was a real crowd pleaser because it didn’t smell like anything else out there. Yes, there is a better balance with Intense but it smells much like any other fresh, citrus fragrance you might pluck off the shelf at your local department store.

It is good value for money and it’ll stay on your skin and clothes for a long time with just a few sprays. But since it’s marketed as a woman’s fragrance yet smells so manly, I would not suggest blind buying this.

If you’ve been wondering which of these Dolce & Gabbana fragrances to purchase then it’s a difficult choice. There are a lot of similarities between the two but just as many differences.

In any case, what you’ll be getting is a fresh, citrusy scent with delicate floral accords. Although if you want something more well-balanced, I’d recommend going for Light Blue Intense. Light Blue is far more citrusy and while there are prominent woody notes in the dry down, those zesty accords win through.

Light Blue works exceptionally well as a signature scent so if you’re hunting for something unique that you can comfortably wear every day without causing too much of a stir, Light Blue would be your obvious choice. On the other hand, for women who want a fragrance that packs a little bit more of a punch but still isn’t offensive then Light Blue Intense is richer, slightly warmer, and lasts a little longer.

Where value for money is concerned, these are both deserving perfumes. Each has outstanding performance and smells very pleasant for all intents and purposes. While Light Blue Intense is a touch more expensive, it’s certainly not over the odds for what you’re getting.

Again, I have to point out that Light Blue Intense has a very masculine character so if this is something you want to avoid, then I wouldn’t suggest buying this fragrance. It is this, for me, that puts Intense in second place; it’s just not what you expect and that is a little disappointing. What’s more, it doesn’t have the individuality that Light Blue possesses and since we waited so long for this intense version, they really could have done so much better with it.

So, that leaves us with Light Blue as our winner. Now you may say that I was biassed from the off because of my affinity to this perfume and that could be the case. However, not one to write an unfair review, I have fully indulged in the delight of Light Blue Intense and it’s not that I don’t like the perfume. Rather, it has more to do with that unexpected character I keep talking about. In every other aspect, it’s a winner and something I would definitely not shy away from recommending if more masculine scents are your thing.

Light Blue and Light Blue Intense share very similar compositions. The main difference between the two is the scent. Light Blue is lighter and fresher and can easily be worn as an everyday perfume. On the other hand, Light Blue Intense has a richer fragrance that may be considered unisex and, I think, is more of an acquired taste.