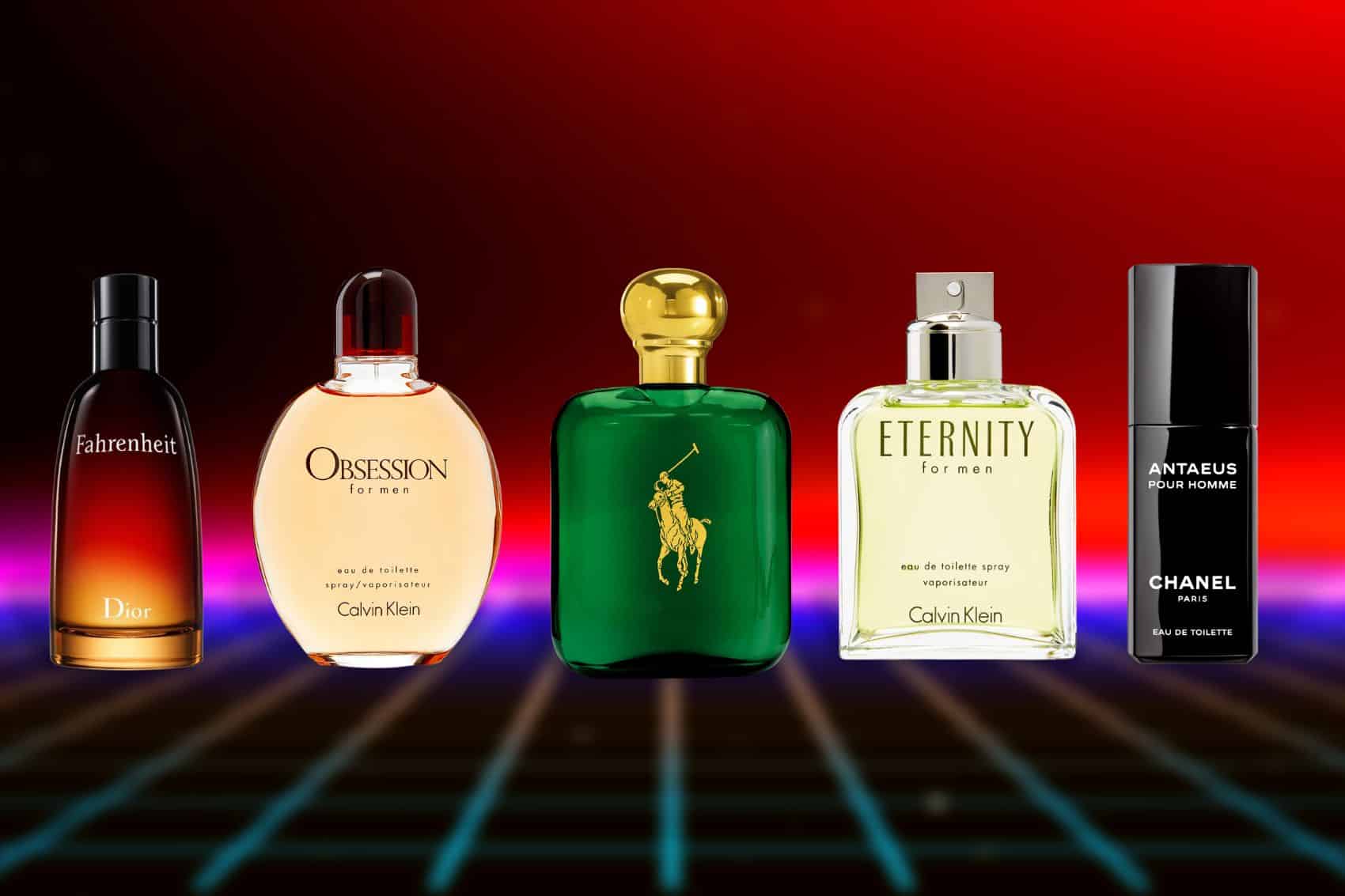 Duran Duran, the introduction of the Walkman, those bright (almost garish) outfits and anything that might be neon were all popular in the 80s. But any guy who wanted to get noticed had to wear the most on-trend cologne.

There were plenty to choose from so guys were spoiled for choice in the 80s. If you grew up in this decade then this guide about the most popular men’s colognes 1980s will take you right back. What was your signature scent? Maybe you’ll find it on this list!

The 1980s were the era when you had to own at least one bottle of Obsession if you were a guy. This fragrance by Calvin Klein was, without a doubt, one of the most successful colognes of the decade.

Obsession remains popular today and it’s little wonder when you consider the warm spicy accords that feel comforting but also incredibly sexy. Obsession for Men was actually launched a whole year after the original female version, which was just as well received. There’s no better fragrance to take you back a few decades than this one.

There is no doubt that Giorgio Beverly Hills is a more mature cologne, and the strong aldehydes contribute to that impression. I think it’s suitable for all ages since the note blends perfectly with a variety of other accords.

A bottle of Giorgio Beverly Hills was a must-have for a classy 80s guy. One of the great things about this fragrance is that it is an excellent all-rounder. Guys could wear this to work and just as easily wear it for date night or an evening out. Versatility is in this cologne by the bucket load.

If you don’t know this 80s scent, then you may recognize the name from an episode of F.R.I.E.N.D.S where Joey is working in a department store selling cologne. ‘Bijan for Men?’ Ring any bells?

If not, let me introduce you to this classic 80s cologne for men. Bijan is an amber fougere fragrance with a very complex blend of notes like sage, musk, cinnamon, tarragon, lavender, cloves, leather and many more.

What’s even better is this highly characterful cologne wasn’t bank breaking and you can even still get your hands on a bottle today.

You can’t go wrong with Drakkar Noir for a classic 1980s cologne. This scent won awards; it was that popular and anyone who was anyone in the 80s owned a bottle of this.

Drakkar Noir was loud, in your face and super heavy. But with its blend of highly aromatic, manly notes, it was no wonder everyone loved it so much.

Modern perfume fans may feel a little reluctant to try Drakkar Noir as it really does have an 80s vibe and reputation. However, if you try it, you’ll notice that the cologne is uplifting with a contrasting woody dry down that feels somewhat sexy.

I’ve spoken about Joop Homme before and my opinion on it is unchanging. For me, this is far too much of a sweet cologne but it seems I am alone in thinking this. Because Joop Homme is one of the best 80s colognes and young guys are still dousing themselves in it today, so there must be something special about it.

And I HATE being wrong but in this case, I have to admit that I might be. Joop Homme is a sweet amber fragrance with warming notes of cinnamon, tobacco and tonka bean. It’s got a youthful character but also invokes nostalgia so you might say it’s one of the most versatile on this list!

A lot of people might call Stetson an old men’s cologne but I like to think of it as more of a timeless classic. Many of my friend’s dads would wear this back in the 80s so it always brings back happy memories of socializing in this decade.

While it has a citrus opening, Stetson is quite sweet after it dries down and is considered to be one of the best musky colognes of the 1980s. Alongside that musk in the base, you’ll find the sweetness of honey and vanilla. For slightly older women, this may bring back flashes of dating that handsome, sophisticated guy in the 80s.

Kouros is one of YSL’s most iconic men’s colognes, not just from the 80s, but ever. Back in the day, it was seen as super masculine but a lot of modern wearers find the fragrance nothing but offensive. And when you learn the rumored inspiration behind it, you may be even further put off. But be warned; it’s not pretty!

But there is some good news. If your nose isn’t stuck in the 80s,  YSL launched a modern version of this perfume; Kouros Silver, in 2015. It’s a lot fresher and less ‘old man cologne’ than the original and just shows that, even though something was once popular, a reformulation goes a long way in keeping it alive.

Just look at the bottle for Jovan and you’re taken back in time. It reminds me of seeing this perfume on my dad’s vanity when I was knee-high to a grasshopper. But while the bottle might be trapped in time, the fragrance is surprisingly contemporary.

So many people talk about how this is a super sexy fragrance, and I have to agree. The amber and vanilla notes are so intoxicating. But the bad news is that it’s so challenging to get your hands on a bottle these days. It’s discontinued but you can find this through second-hand sellers.

While Jovan was launched at the end of the 70s, its popularity through the following decade was undeniable.

After the incredible success of Obsession in the 80s, Calvin Klein launched another belter right at the end of the decade. Eternity takes us out of the neon bright 80s and into the 90s with its fresh aromatic accords.

Eternity is what you’d call an iconic fragrance and many people still splash it all over themselves today. It’s got a lot of prominent floral notes like lily of the valley, orange blossom and jasmine but still manages to be masculine and powerful.

I love Eternity for Men and what’s great is that it’s a relatively affordable fragrance, especially by today’s standards. Back in the day, colognes like this allowed men to feel modern and free so it really appealed to the younger crowd.

One of the main reasons that Antaeus became so popular with men in the 80s was that it was a much more modern scent that guys were used to. Up until this point, colognes had a very old fashioned feel but the younger generation wanted something fresh and new.

Enter Antaeus which was a bright citrusy floral cologne with a stunning labdanum and patchouli base. If you wanted something mysterious and sensual in the 1980s then this was a cologne you could count on. And don’t worry, if you want those nostalgic moments, you can still buy this one today.

Fahrenheit is one of those perfumes that just transports you back. Not only is this a classic 80s men’s cologne but even the bottle has a vintage feel with bright colors that match the decade perfectly.

I’ve noticed that a lot of men are coming back to Fahrenheit after decades of not wearing it. One of the reasons it was so popular is how intense the scent was. Modern blends are a little less intense but still far superior to some competing fragrances.

If there was ever a men’s cologne from the 80s that could be called truly classic, Cool Water would be it. I was born in the 80s, and despite being young at the time, I clearly remember a lot of the men in my life smelling of this Davidoff scent.

Going through the 90s and 2000s, Cool Water remained a staple perfume in the collection of almost every guy I’ve ever known. Even now, I still smell it on people and I think it’s that unique, uplifting and fresh scent that’s just so easy to wear that makes it so well loved.

Creed’s Green Irish Tweed was so popular in the 1980s because of the celebrity following it quickly gained. That doesn’t come as a surprise since Creed is one of the most luxurious (and expensive) niche perfume brands in the world.

Green Irish Tweed is a classic scent that many 80s men loved because it was masculine yet fresh. While many saved it for a special occasion owing to the price tag, others doused themselves in this as a signature scent because there was simply nothing else like it at the time.

OK, I get that this is actually a 70s scent but since it was launched at the back end of that decade, it really gained its popularity throughout the 80s. As such many consider Polo to be one of the best men’s cologne from the 1980s.

Polo was designed to be a very masculine fragrance and had a classy, elegant character to it. The perfumer made a conscious effort to omit floral notes, aside from chamomile in favor of more ‘manly’ accords like leather, tobacco and woody notes.

I’d say this was one of those old school classic men’s colognes that’s going to live on for as long as men want to make themselves smell good!

I mentioned earlier how Jovan took me back to the 80s just by looking at the bottle. Cacharel Pour L’Homme does the same thing. It’s like walking into my dad’s bedroom and seeing this cologne proudly sitting on the vanity all over again.

And the scent sends me flying back in time too. It’s what I would personally call a true classic 80s fragrance. Cacharel Pour L’Homme features woody and spicy notes that just capture the essence of the decade; if you know what I mean, you know what I mean!

But that doesn’t mean you couldn’t get away with it today. Pour L’Homme is versatile enough for the modern man.

My Conclusion On 80s Colognes

Certain decades bring back particular memories and there’s a lot that comes to mind when you think of the 80s. But one thing that has a place in the decade was cologne.

At this point in time, there was really no limit on what was available and perfumers were starting  to move away from those classic old guy scents and introducing new, modern accords. What’s amazing is that a lot of these, now iconic, fragrances are still loved today and that’s largely down to the contemporary nature of 80s colognes.

For me, when I think of men’s cologne from the 80s, I think of fresh openings with spicy and woody notes throughout. They’re very masculine but also give me a comforting reminder of my childhood when my dad would scoop me up in a cloud of classic 80s cologne.