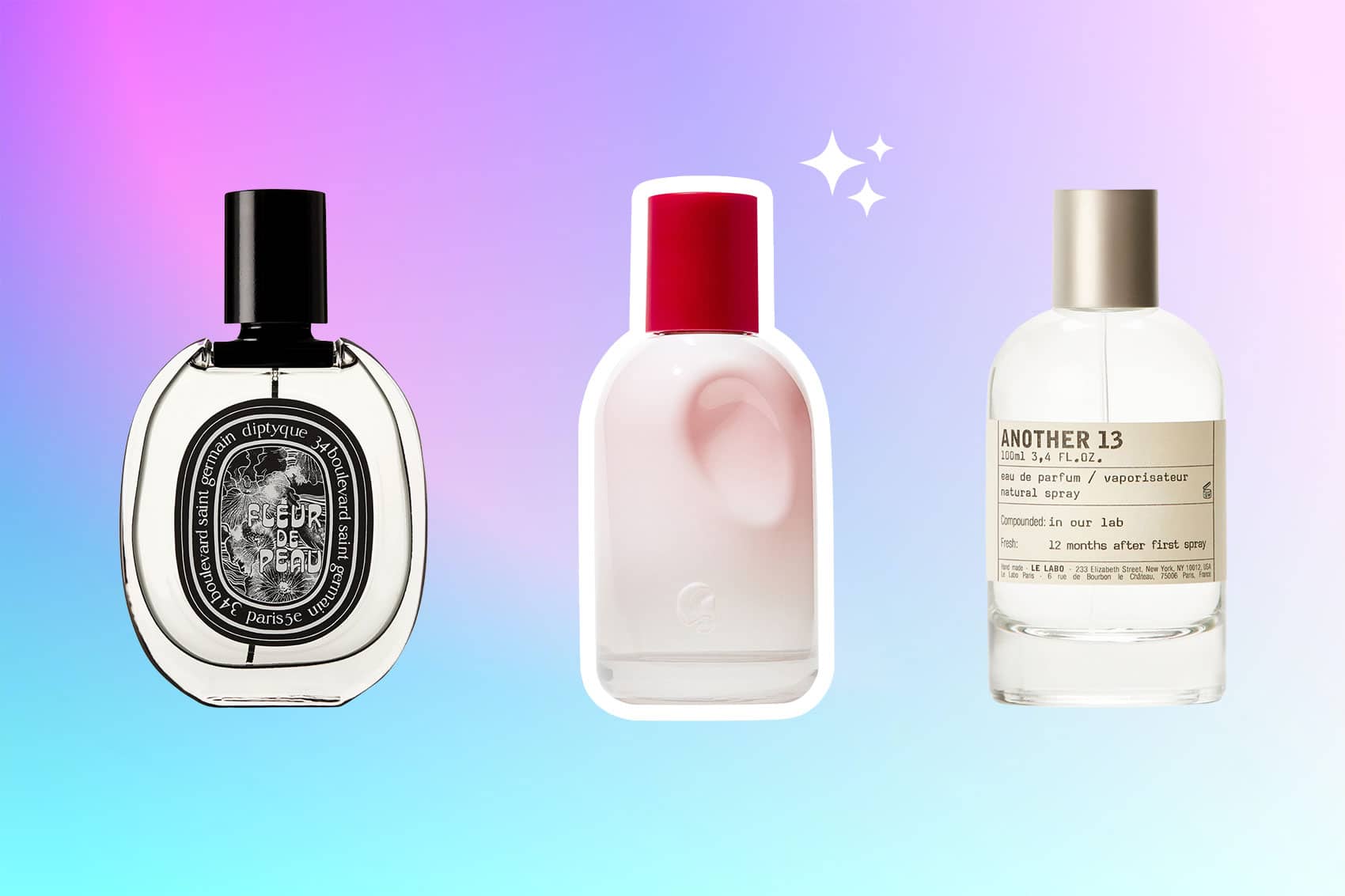 Many fragrances made an impact on a generation, but none quite as much as Glossier You. The perfume was introduced at the end of 2017 and won the hearts of the world.

But if you’ve found yourself wanting something different yet don’t want to move away from the floral woody musk type of scent, you may have wondered if there’s a perfume similar to Glossier You. I’ve been thinking the same thing, and I’ve discovered some lovely Glossier You dupes that I can’t wait to share with you.

Check out the video summary here:

Here’s What Glossier You Is About

You by Glossier is a floral woody musk fragrance from 2017 designed to be worn by men and women. The scent is based heavily around iris and powdery notes with a sweet, musky base. While the composition is much simpler than many other perfumes, this simplicity is what gives Glossier You its character. It’s versatile and well-rounded.

This fragrance is light and delicate so is often favored by those who are looking for something easy to wear that’s inoffensive. You aren’t going to draw in masses of attention when wearing Glossier You as the projection is rather faint. But on a warm summer’s day, the gentle fragrance quite easily spreads.

With that in mind, some people love the concept of the floral woody scent of You but want something a little more intense. This is just one of the reasons that some of us are craving a good Glossier You dupe.

You is a fresh, clean fragrance that works very well as an everyday perfume and it’s incredibly easy to wear. While it is a delicate scent, the perfume does last well on the ski, making it convenient and smelling great.

While certainly not one of the most expensive perfumes on the market, some of the clones of this fragrance are more affordable and smell similar at the same time. This is a major attraction of choosing a perfume dupe of Glossier You.

7 Dupes Strikingly Similar To Glossier You

1. God Is A Woman by Ariana Grande

Ariana Grande is well known for her extensive perfume collection and God Is A Woman has earned itself an excellent reputation. One of the main reasons for this is that it’s an incredibly affordable perfume that, at least to me, feels a lot more luxurious than it is.

I think God Is A Woman is certainly a more complex blend than Glossier You which some might see as a bad thing. In the end, if you’re looking for an exact copy, then that’s not what this is. However, don’t stop reading just yet because many things make God Is A Woman a viable dupe.

For starters, you definitely get the floral, musky personality that’s associated with You and the additional notes make for a light, sweet perfume that’s super easy to wear. Much like Glossier’s offerings, God Is A Woman is a very delicate fragrance, so if that’s something you’re after, you’re in the right place.

The major downside of this perfume is that it doesn’t sit on the skin for long. While it is more affordable, you’ll end up spritzing more, so it balances things out in terms of cost.

A perfume for men and women, Radiant Nectar Clean is a floral woody musk fragrance that’s a pretty close match. Much like God Is A Woman, the perfumers have thrown in some extras, so it doesn’t have the same simplicity as You, but I certainly think that’s not a terrible thing.

If you like the basic makeup of Glossier You but are craving something a little more intense and complex, then Radiant Nectar Clean might be right for you. It begins with sweet musk and moves through a spicy floral heart. The base is also filled with musky notes and some cedar for a slightly warmer finish.

Sadly, if you’re looking for a more affordable option, Radiant Nectar Clean isn’t it. It’s actually more expensive than You, but it is long-lasting and feels a little more luxurious. As a summer daytime fragrance, it’s light, fresh and easy to wear.

3. Kaleidoscope by Bath And Body Works

Perfume fans raved about Kaleidoscope as a great Glossier You dupe. It’s not the exact same, but it has those iris notes that give the original its character. Aside from this, Kaleidoscope has a heavy woody vibe which is excellent for fans of warm woody fragrances. There’s a burst of cedar at the heart and a hit of sandalwood as the perfume dries down.

In terms of cost, Kaleidoscope is comparatively more affordable than You but not so much that I would consider it a ‘cheap’ perfume. But similarly to You, it’s a very delicate scent, so if you’re looking for something that will project enormously, then this probably won’t be the right choice for you.

But actually, what really caught me the most about Kaleidoscope was the bottle. You comes in a very simple flacon that nods towards the simplicity of the fragrance. However, since Kaleidoscope is a much more complex blend, the brightly colored rainbow bottle is the perfect container.

Diptyque is one of the most well-loved niche perfume brands and has an array of fragrances for every taste. When it comes to a powdery floral offering, Fleur de Peau is the closest to You that you’ll get from this brand.

Now, I’ll be upfront from the off; Fleur de Peau is NOT a cheap alternative to You. In fact, it’s more expensive, so if you want a bargain, this is going to prove to be a downside. However, if you’re looking for something luxurious and high quality that simply pays homage to You then this is where you’ll find it.

Through the heart, you get those heavy iris notes which is one of the things that makes this such a close match. But they’re complimented by rose for something a little more detailed.

Importantly, Fleur de Peau has a musky base which nods toward the sweetness of the original.  That said, it does have a whole host of other accords as it dries down such as leather, carrot, ambergris and sandalwood. If you are looking for something as simple as You, this may be a little too much.

I was delighted to find this incredibly wallet-friendly perfume similar to Glossier You that not only smells great but is presented in a chic, expensive-looking bottle.

A lot of Glossier You dupes are designed for women and Cloud Musk Mix: Bar is one of the handful that are unisex, just like the original. It instantly makes it stand out from the crowd. But what about the composition?

Cloud Musk Mix: Bar is one of the simpler dupes making it much closer to You. It features iris at the center and musk in the base combined only with a few other notes. There’s the freshness of cotton flower and jasmine through the heart while woody notes compliment the sweet base.

Once again, this fragrance is extremely delicate so it isn’t going to turn heads the second you walk into a room. But then, what more would you expect from a fragrance that’s a dupe of an already light scent? However, for summer afternoons out or an intimate date night, I think this would be ideal.

You’ll have to bear with me on this one. Another 13 is not an exact copy of Glossier You but since it has such a musky character, I had to include it. Moreover, I’ve heard a lot of excellent feedback comparing this one to You, so I had to check it out, and I’m glad I did.

Another 13 works around musk and ambrette (musk mallow) and combines these sweet scents with woody notes and pear. It’s quite an unusual blend but certainly unique and is an excellent alternative if you want to stay in the same ballpark without wearing something that is merely Glossier You in different packaging.

This fragrance is not a cheaper alternative, so I’d have to say that this wouldn’t be the right choice if you’re looking to save money. But what I really liked about Another 13 is that it’s much more intense than Glossier You, so it makes an excellent option for those who like to make an entrance with their fragrance.

One of the things that I absolutely love about Rosy Mousseline is that it’s like a sister of Glossier You instead of being a twin. It’s got just as simple a composition but uses very slightly different accords so that it’s got its own character.

It begins with fresh and fruity pear followed by rose instead of iris. At the base, Rosy Mousseline features ambrette instead of musk so it’s still sweet but not a direct copy. But these notes all together make something that’s very similar and just as easy to wear.

Rosy Mousseline is another very delicate perfume with a light projection ideal for everyday wear. However, it won’t instantly stand out, so it might not be a great choice if you want an evening or special occasion fragrance.

Where cost is concerned, this is one of the best value Glossier You dupes and comes in at a very reasonable price. When you consider what a good match this is, the affordability certainly makes it one of the best.

You by Glossier is a modern fragrance that looks set to become one of the perfume icons of the 21st century. Its delicate, fresh, and clean character make it incredibly easy to wear, and since it’s so versatile, it doesn’t come as a surprise that it’s become such a popular choice.

When choosing a Glossier You dupe, you need to primarily make sure that you find something with a similar composition. One of the things that makes this perfume stand out so much is its simplicity, so if you can find a clone whose composition is just as simple, then you’re onto a winner.

That said, you’ll often find these dupes to have additional notes, and that’s OK. It gives them their unique character meaning that you don’t end up with an exact replica of the original. Not something that everyone wants.

Whether you’re looking to save money and find a cheaper alternative or just want a new perfume that’s along the same lines as Glossier You, you can feel sure that you’ll be spoiled for choice. There are some great affordable fragrances like God Is A Woman by Ariana Grande. While on the other hand, perfumers are making some beautiful high-end perfumes similar to Glossier You like Radiant Nectar Clean.

Whatever you choose, I’m sure you’ll enjoy those delicate powdery notes and floral iris alongside the sweetness of musk that’s so reminiscent of the iconic Glossier You.