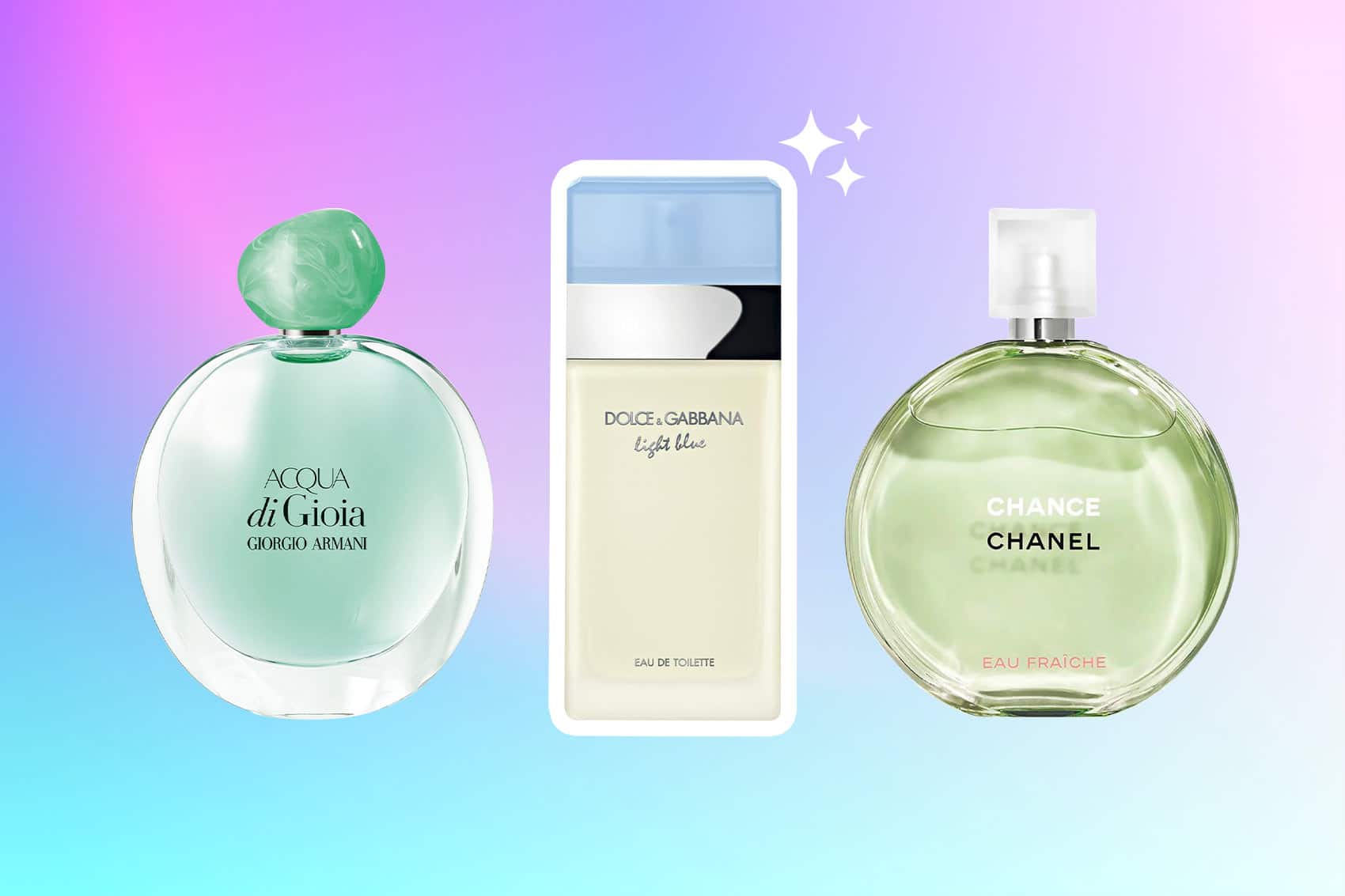 When Dolce & Gabbana launched Light Blue back in 2001, the fragrance was an immediate hit. With refreshing citrus tones and notes that take you back to breezy days on a sunny beach, this became a go-to perfume for many women.

However, if you can’t get your hands on a bottle of Light Blue, the good news is that there are a number of alternatives. In this guide, we will be introducing you to some of our favorite perfumes similar to Light Blue.

A word about Light Blue by Dolce & Gabbana

Light Blue is one of the most recognized fragrances from Dolce & Gabbana in the 21st century. Launched in 2001, this casual and easy-to-wear perfume has remained a summer favorite for women all over the world. In 2007, a men’s version of the fragrance was also released.

According to the head perfumer involved in its creation, Light Blue is inspired by summertime in Sicily, Italy. It is quite easy to be transported to a beachside location with a cocktail in your hand when wearing this scent. It’s no wonder it is so popular.

While the perfume is marketed as being a fruity floral scent, there are many more layers to its olfactory nature. For example, while being incredibly fresh, Light Blue also has strong woody notes that give it a warmer tone. There is no denying the heavy citrus notes at the top which include Sicilian lemon, complemented by apple, bellflower, and cedar.

As the fragrance dries down, it moves through jasmine, white rose, and bamboo before settling into a woody, musky base. This is difficult to replicate and there have been many cheap dupes of this successful perfume that do not have the same longevity or balanced blend. That being said, there are several other quality fragrances that feature many of the same scents while not exactly the same as Light Blue.

In your search for the perfect daytime fragrance, you may have fallen in love with Light Blue. But for times when you may not be able to come across a bottle, or if you want something a little different but with a similar character, the following fragrances are about as close as you will get.

Looking at the bottle, you don’t see any initial similarities. But what is held within reveals a head that compromises lemon and cedar, just like our beloved Light Blue. Moreover, the strong hint of jasmine at the heart has a remarkable likeness. The base is much woodier than Light Blue with teak and vetiver. However, it does feature the musk and amber notes that Dolce & Gabbana used in their scent.

Chance Eau Fraiche is known as being a chypre floral so it lacks the fruitier side that Light Blue boasts. But those citrus and wood notes cannot be denied making this a beautiful summer’s day alternative to Light Blue.

Ideally worn in the spring and summer, L’Eau de Chloe is a much more complex take on the citrus and woody style of Light Blue, yet remains warm and fresh. While L’Eau de Chloe features many of the same accords as Light Blue, these are complemented and built upon that make this perfume a much more full-bodied fragrance.

For example, where Light Blue features only lemon at the head, L’Eau de Chloe uses grapefruit, bergamot, and citron for a fresh, uplifting start. Moving through the heart, we find rose and jasmine, just like Light Blue. However, in this case, many more floral notes hit the nose too, including violet, peony, and magnolia.

As L’Eau de Chloe dries down, we are treated to that woody, musky base with a hint of amber that we get from Light Blue. Only this time, patchouli, oakmoss, and labdanum give it a much richer composition. For a comparable price to Light Blue, this is an ideal fragrance for ladies who want something similar yet more intense.

Light Blue is one of the more affordable fragrances out there, but if you want to splurge and treat yourself to something a little more luxurious, then The Scent Of Peace could be what you are looking for. This woody floral fragrance uses some of the same accords as Light Blue, but unlike L’Eau de Chloe, it does this in a much more subtle and refined manner.

Rather than using a heady mix of notes at the head as Light Blue does, the citrus notes of grapefruit are given a fruity edge using blackcurrant. Where Light Blue has an intense floral heart, The Scent Of Peace only uses  the lily of the valley for something much more delicate.

As it comes to its climax, The Scent Of Peace uses those musky and cedar notes that perfectly mimic the dry down of Light Blue. But again, this is much more subtle. You could say that this was the perfect summer alternative when you are looking for a ‘less is more’ fragrance.

While the bottle may be markedly more pronounced than Light Blue, the contents are incredibly similar. Voyage d’Hermes is a woody floral fragrance that perfectly picks up on these notes and how they are used in Light Blue.

The perfume comes at a similar price, so it is relatively affordable and a good option for those looking to test the water with something new. What’s even greater is that Voyage d’Hermes is a unisex fragrance which is something that Light Blue cannot lay claim to be.

The composition begins with those all-important citrus notes in the form of Amalfi lemon, only now it is complemented by cardamom and spice. This gives the fragrance that warmth right from the opening. The heart does comprise floral notes but these are given a fresh dash of green and tea accords. Something that is quite different from Light Blue but still gives it that sparkling edge.

Finally, Voyage d’Hermes reveals musk and woody notes, allowing a very similar base to Light Blue. However, the projection on this is markedly more intense so it may work better for people who like their fragrance to be a little more noticeable.

Some may consider Light Blue to be a slightly more mature fragrance. If you like the notes but feel that you would prefer something a little more youthful then Acqua di Gioia could be right for you. It features many of the same accords and has a similar inspiration behind it.

Where Light Blue took its inspiration from Sicily, Armani drew inspiration from the Caribbean and the sea. But both themes are similar, and as such, the fragrances each ignite images of the open water and fresh sea air.

At the head, you will find Amalfi lemon, which moves through a jasmine and floral heart. This is a very close nod to the composition of Light Blue. During dry down, you will find those cedar notes that Light Blue is famed for but they are now matched with labdanum and brown sugar for a slightly sweeter end result.

You must be careful when choosing cheaper fragrances as some of these may not contain such potent fragrance oils and tend not to last. However, Elizabeth Arden is a well-respected yet very affordable brand and Green Tea is the perfect Light Blue alternative for the bargain-loving fragrance fan.

It comes in an astonishingly similar bottle to Light Blue, both in shape and hue. While the fragrance differs slightly, this gives it a uniqueness while still having many of the same notes as Dolce & Gabbana.

Launched just two years prior to Light Blue, this composition shows that these citrus aromatic and fresh fragrances were popular at the time. Green Tea begins with lemon, mint, and bergamot for a slightly more complex start. The middle notes of jasmine are very similar to Light Blue, but here, the amber and musk start to come through much sooner.

This musky, amber accord follows through to the base but has a much spicier and warmer finish using cloves and caraway seed. This is blended with green tea that gives the overall ending a fresh hint. While Green Tea is much less intense, it would serve as an ideal everyday summer fragrance as opposed to Light Blue.

When you are looking to find a fragrance that is similar to Light Blue by Dolce & Gabbana, it is important to seek out perfumes with similar scent combinations. This is an incredibly unique fragrance that is not easily replicated. For this reason, one should always remain vigilant to avoid using low-quality copies.

Take into account that fruity floral fragrances with woody notes at the head and base will have a similar air to Light Blue. However, you will also want to search out fresh and breezy perfumes with a similar character to Light Blue.