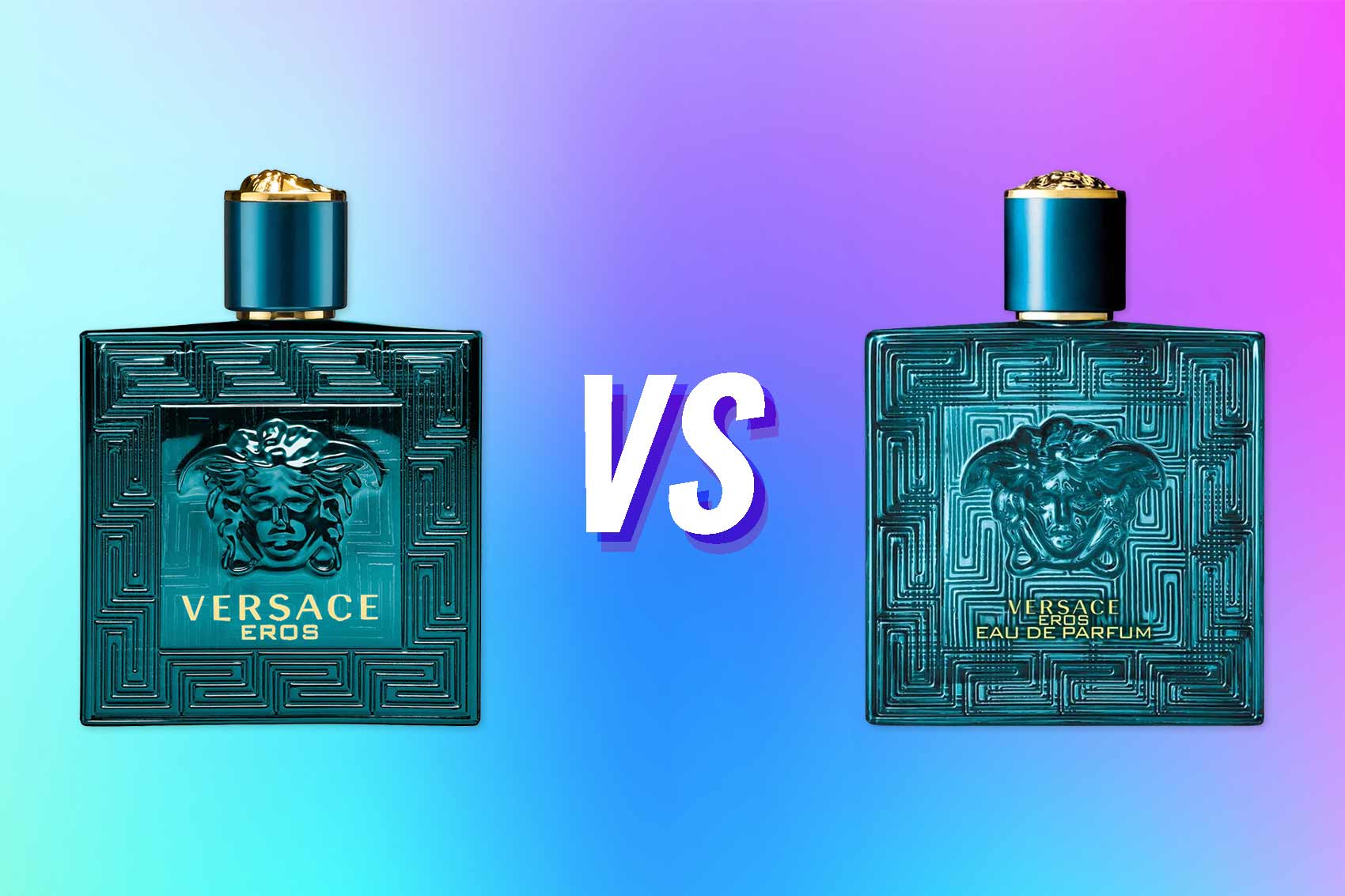 Versace is one of those brands that you either love or hate – there’s no in between. I happen to be a fan, and over the years I’ve collected quite a few different scents from the brand.

Today, I’m going to compare two of my favorites: Versace Eros EDT and Eros EDP. Even though they share the same name, these two scents are actually quite different from each other.

Some people are saying that the EDP is better than the EDT, while others are adamant that the EDT is the superior scent. Who is right and which one should you buy? My goal in this post is to compare the two so you can decide which one is best for you. So let’s get started.

The original Versace Eros was launched back in 2012 and is sold as an eau de toilette. It saw almost immediate fame and is hailed as one of the most popular men’s fragrances of the last decade. This is an aromatic fougere perfume that is super strong and doesn’t go unnoticed.

Versace Eros EDT comes in a rich blue bottle with a gold lid and is embossed with an image of the Goddess Medusa. It’s a powerful image and one that is fitting for such a powerful fragrance.

This cologne is advertised as being passionate and filled with desire and I can kind of see where they are coming from with this notion. However, to me, Eros EDT smells much more sexy in a refreshing way. As I was walking along the beach with my special one, the air filled with lust and flirtation.

The composition begins with fresh notes of mint, green apple, and lemon and these do linger throughout. At the heart, we notice geranium, ambroxan, and tonka bean which warms and sweetens the blend.

This warmth and sweetness continues in the base where you get a strong hit of vanilla alongside woodier notes of cedar, vetiver, and oakmoss. What I really love about Eros EDT is how strong it is. An eau de toilette is one of the least concentrated types of fragrance so it blew me back at how heavy this one is. The strength of the EDT varies depending on the batch; the older versions tend to be stronger than the more recent ones. In any case, I assure you it will not fail to provide you with power.

That said, for some, it may be a little too potent and I certainly wouldn’t recommend it as an everyday fragrance. Unless, of course, you want to be that annoying oversprayer in the room. The projection on this is unlike anything else. Just a couple of sprays and you’ll attract attention from the other side of the room, so go light on it.

But if you’re looking for an evening perfume that’ll make you stand out from the crowd, Versace Eros EDT is a contender. Owing to its very rich and out-there scent, I’d say that this would serve you better as a winter fragrance. Wear this on already warm skin and it might just be too powerful.

My Verdict On Eros EDT

I think that Versace Eros is the perfect fragrance for guys in their 20s; it’s incredibly youthful, sharp, and fresh. It’s ideal for confident men who aren’t afraid to stand out but since it can be a bit cloying, it’s not the most versatile fragrance and you certainly couldn’t just wear it for any occasion.

The newer EDP version of Versace Eros was released in 2020. While there are some similarities with the EDT, the eau de parfum has a unique character that doesn’t make it just a spiced-up version of the original.

It comes in a bottle that is remarkably similar to the original so do be careful not to buy the wrong one, and I say that in all seriousness. All that’s different is the small text that reads ‘eau de parfum’ at the bottom of the bottle.

But that’s beside the point since what I’m really excited about is what’s inside the bottle.

Unlike the EDT, the EDP is an amber woody fragrance and what’s exciting is that it’s much more versatile.

I say that because I feel as though this one would be easier to wear to a wider range of events. As long as you go easy on how much you spray, you could wear this to the office, a quiet lunch, the theater, or anywhere else you fancied.

The reason for this is that Eros EDP is a much more classic scent. I might even call it mature. I’d seen a lot of older guys saying that the EDT felt too youthful to them. And I can see where they’re coming from. It’s almost got this soapy, shower gel feeling that’s more appropriate to be worn by a younger gent. Whereas the EDP is richer, smoother, and more sophisticated.

The smell of the EDP opens with mint, candied apple, lemon, and mandarin orange. It’s still a very refreshing and uplifting opening. Then, things are much less sweet and more earthy and raw thanks to the exclusion of the tonka bean and the addition of clary sage.

Another thing that makes this a more timeless scent is the combination of aromas at the base. You’ve still got the classy sweetness of vanilla which stays quite prominent here, but this is paired with sandalwood, cedar, patchouli, leather, and a bitter orange smell. It stands quite luxurious and dark to me.

Where performance is concerned, Eros EDP does very well. It’ll last ages on the skin and on clothing even with just a couple of sprays. While it does project just as well as the EDT, it’s not quite as in your face thereby it feels less offensive. Moreover, the blend feels less synthetic and more natural which adds to the luxury quality that I enjoy when using it.

My Verdict On Eros EDP

Versace Eros EDP is a stunning fragrance that is suited to almost any occasion. It wears well and while it does draw attention, it does it in a very classy manner so it’ll rarely offend. My only real issue with Eros EDP is that it’s not really suited to younger guys so it loses some of its versatility for this reason.

The scent of Eros EDT and Eros EDP certainly has its similarities. There are a lot of elements throughout the formulation that are similar. Both start off with a refreshing kick of mint and citrus but move through a series of highly aromatic notes as the fragrance progresses.

But I think that the complex and sophisticated blend of the EDP is far superior. It just has a timeless quality that feels luxurious and rich. I sometimes feel as though I’m sitting around the captain’s table on the most luxurious cruise liner in the world when wearing this.

Eros EDT, however, is far from being awful. In fact, it’s a delightful fragrance but I’d say it was much more seductive. If you’re after something that’s going to earn you compliments from the ladies, this perfume has been shown to deliver time and again.

I really like that both of these fragrances perform as well as they do; there’s really no competition as they both hold their own. Eros EDT could be considered to be a little more in your face in terms of sillage but if you wear it to the right event, it’s not going to be an issue.

Versace Eros EDP is a relatively versatile fragrance when it is used correctly. Spray too much and it will be too overpowering for some occasions but a little goes a long way. I also feel that this one, while very deep, wouldn’t be too much during the summer so you could wear it all year round.

On the other hand, the EDT would be far too powerful when worn in warm weather so it loses some points for versatility here. That said, it could become your new best friend for special occasions and things like a romantic meal out or clubbing.

Versace Eros EDT and Eros EDP retail at roughly the same price; around $120 at the time of writing. If it’s value for money you’re looking for, you won’t need to worry as their qualities are pretty evenly matched. Choose the one that appeals to you the most.

However, I have to say that, for me, Eros EDP reigns supreme. It’s a highly intoxicating fragrance that I could just smell over and over again. It doesn’t offend and yet is one of the best performing men’s fragrances I’ve seen in a long time. What’s more, it’s so much easier to wear whenever the moment takes you than the EDT and this just makes it that little more versatile. It’s a clear winner in my eyes.