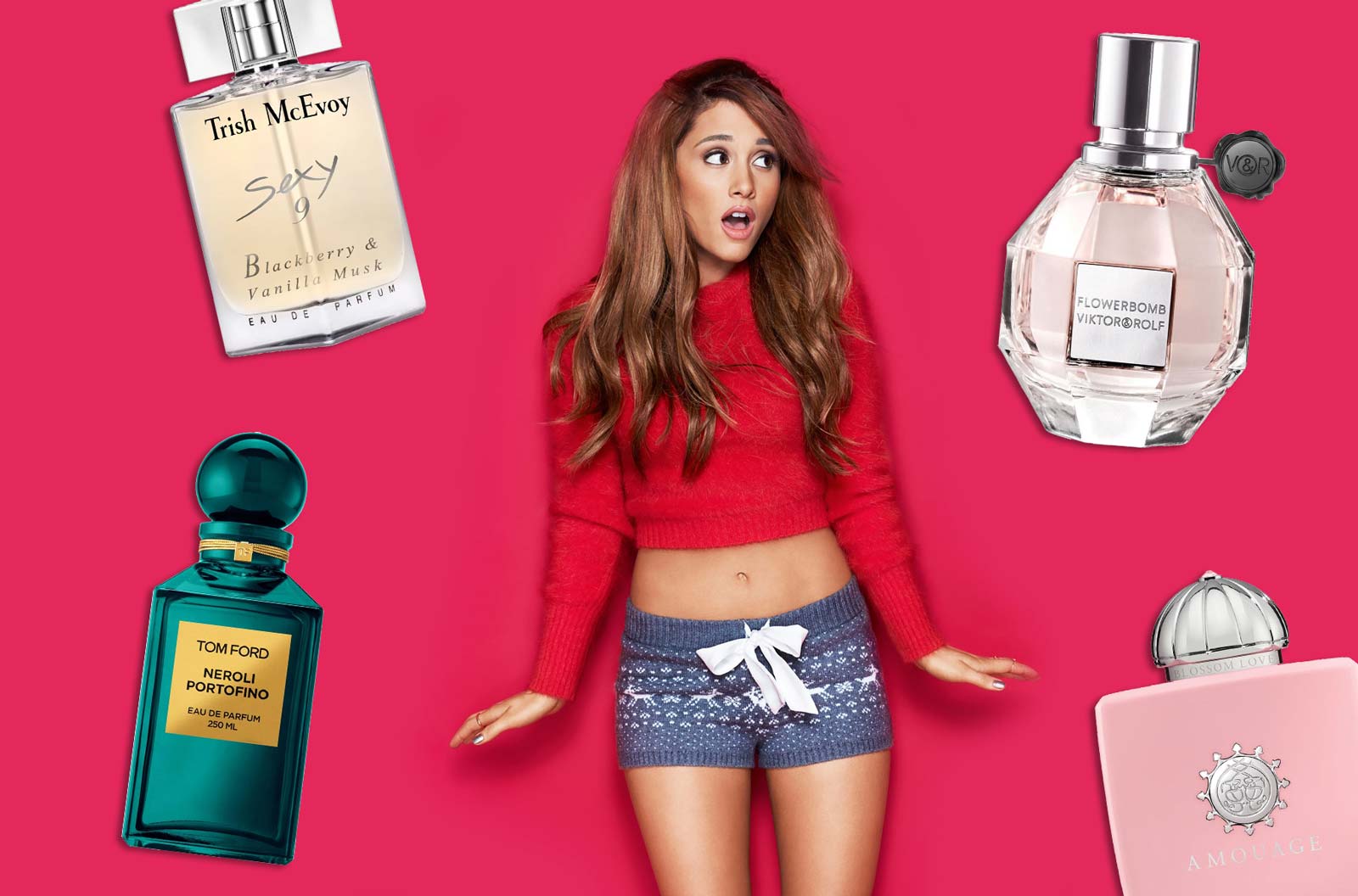 The way that Ariana Grande went from child star to global pop goddess is quite the achievement. It therefore doesn’t come as much of a surprise to discover that young girls all over the world want to know everything there is to know about one of the most influential role models of the 21st century. A lot of these fans are asking; what perfume does Ariana Grande wear?

Where fragrance is concerned, Ariana’s taste is pretty diverse. She is well known for wearing Tom Ford’s Neroli Portofino Aqua and Amouage Blossom Love as well as Flowerbomb by Viktor and Rolf. But the starlet also indulges her senses with Trish McEvoy Sexy No 9 as well as a few scents from her own fragrance range.

Why we love Ariana Grande

It would seem that Ariana Grande can do no wrong. As one of the best-selling singers of all time, Grande has found herself in the same ranks as smash hit artists like The Beatles. According to CNN, Ariana is the only artist to hold the Numbers 1, 2, and 3 spots on the Billboard charts simultaneously since Lennon, McCartney and co back in the 1960s. That’s no mean feat.

But her influence goes far beyond the music industry. Ariana found success in her childhood as an actress, most notable on Nickelodeon but also has a huge impact on the fashion and beauty industry with many trying to imitate her style. What better way to do that than by picking up one of her favorite perfumes?

What Is Ariana Grande’s Favorite Perfume?

Looking at the many talents of Ariana Grande, it doesn’t come off much as a surprise to learn that she has just as much versatility in her perfume collection. From sensual, seductive fragrances like Trish McEvoy Sexy No 9 through to the floral sweetness of Amouage Blossom Love, there is always an element of surprise to Ariana’s scent.

Many of the fragrances she wears are playful and youthful and this could be a play on the audience that she appeals to. Let’s look at Blossom Love, for example. This perfume comes in a girly pink bottle and is a highly floral fragrance that shows off Ariana’s feminine side. It begins with heliotrope and bergamot but combines its remaining floral notes with amaretto, suede, and amber for a warm and rich accord.

Staying with the floral theme, Ariana is a big fan of Flowerbomb by Viktor and Rolf. This is a fragrance that has been hugely successful with women around the world. This floral fragrance is the epitome of power and considering that Ariana Grande has had such success around the world and an incredibly powerful influence, it is perfectly fitting.

Along with heady floral notes of orchid, jasmine, freesia, and rose, there are a lot of fresh notes like tea and bergamot. One could just imagine Ariana wearing this on a summer’s day in a flirty statement dress.

Another fragrance that Ariana is purported to wear is Sexy No 9 by Trish McEvoy. This fruity-floral composition shows off the fun yet sensual side of our starlet. It blends rich blackberry with orange and Amazon lily at the head, finishing with vanilla, musk, cashmere wood, amber, and sandalwood.

Fragrances like this allow women to show off their passionate side with those warm, spicy base notes leaving an air of exotic mystery.

Where luxury fragrance is concerned, there are few brands as reputable as Tom Ford and with Ariana’s success, who could blame her for wanting to indulge? This is one of the perfumes that she is most often reported to wear, and in my opinion, thanks to a heavily citrus scent, it is a great fragrance to show off her youthful elegance.

Neroli Portofino is a fragrance with a highly aromatic scent. This is slightly outside of Ariana’s usual choices because, as we have seen, she appears to be more of a sweet and fruity fan. The almost oceanic feel of this fragrance shows just how diverse her tastes are.

Does Ariana Grande Have Her Own Perfume Line?

Much like many other music stars, Miss Grande has launched her own fragrance line. However, while in many cases, celebrities will commission a fragrance and leave the rest to the professionals, Ariana has had full involvement.

In an interview on Good Morning America promoting her then-latest fragrance, Ari by Ariana Grande, the star talked about how heavily involved she had been in its creation. Not only did she talk about how she loves the fragrance, describing it as ‘sweet and yummy’, she compared making perfumes to making music.

Grande discussed how in both industries, ‘it’s all about the notes’. One needs to add two notes together to either make a beautiful chord or something that doesn’t work. The result was a fragrance that took the world by storm, and as such, a further seven fragrances have followed. All of which have been just as well received.

Ari by Ariana Grande is a scent that the pop princess regularly wears alongside her other favorites perfumes. This is a fruity floral gourmand designed to give off a sexy and luscious vibe, something that Ariana manages to do at the best of times.

The bottle that contains Ari is everything you would expect this young songstress to be. It is fun. It is girly. It is outgoing and it certainly isn’t afraid to be in the spotlight. What I really admire about Ariana’s fragrance collection is that there is a little bit of her personality in each bottle. For the millions of clamoring fans around the world, it’s almost as if they are brought a little closer to their idol, especially considering this is a fragrance she actively wears.

Despite being one of the biggest superstars of today’s music business, Ariana Grande manages to remain a people’s person. Her influence on her fans means that they want to be just like their favorite star, and wearing the same fragrances can help them feel closer to her. If you want to copy her style, fragrances such as Neroli Portofino by Tom Ford and Sexy No 9 by Trish McEvoy will do the trick. But since the star also wears her own fragrances, Ari by Ariana Grande is also a popular choice among fans.