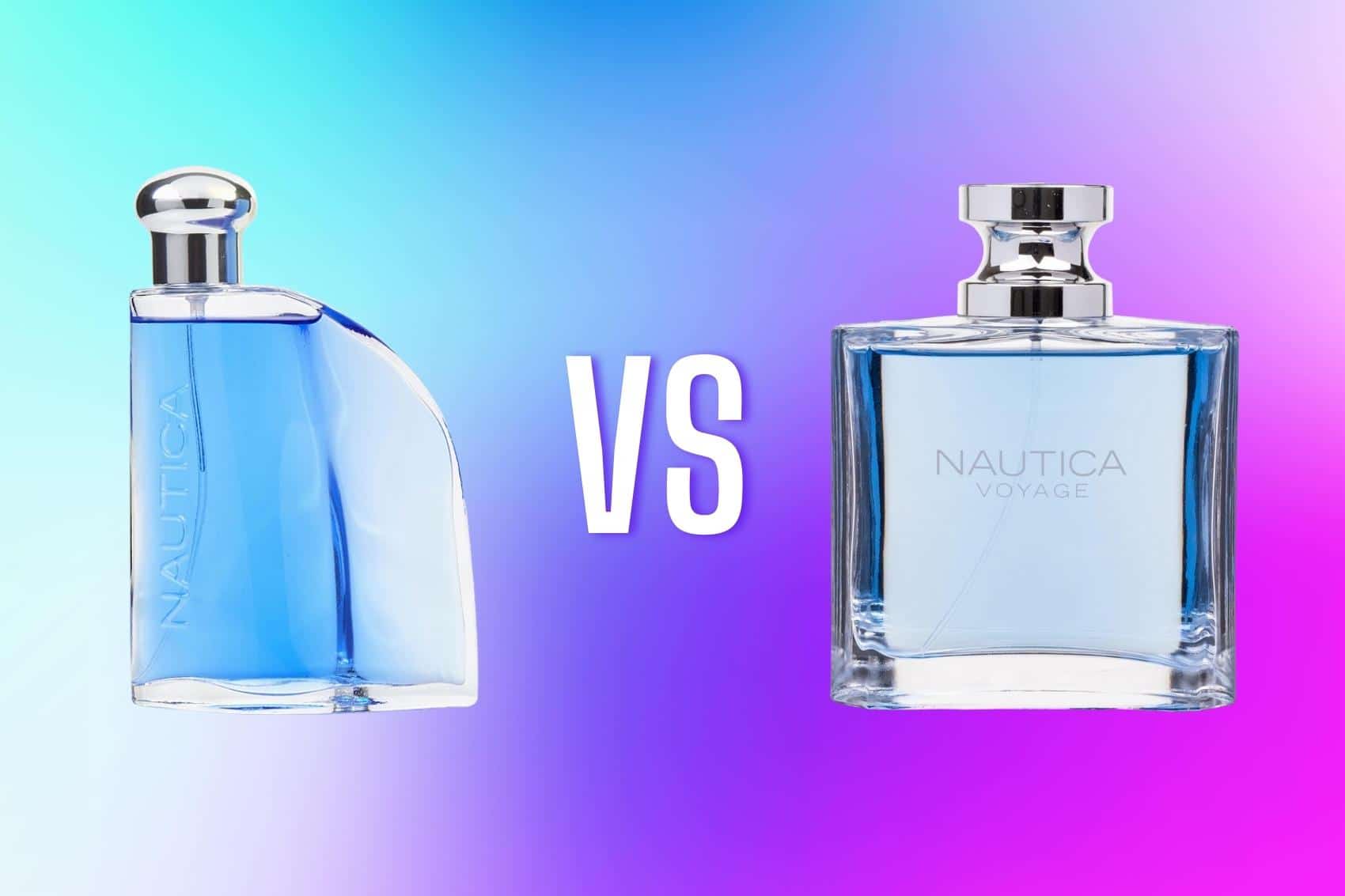 When I first heard about Nautica fragrances I thought, Hmm, just another American sportswear brand releasing sporty fragrances that smell exactly the same. But after trying on a few, I was proven wrong. I quickly became hooked to some as they were exactly my type of scent.

Contrary to popular belief, Nautica colognes don’t smell the same. They all have their own unique qualities, just like the Nautica Blue and the Nautica Voyage. I put together this roundup to help clarify the difference between these two bestsellers, but also to let you know which one I think is better.

Nautica Blue belongs to the Aromatic Aquatic family. Launched in 2005, this Eau de Toilette for men concocted by Maurice Roucel is still one of Nautica’s best sellers.

The ocean-inspired Nautica Blue opens with citrusy top notes of bergamot, mellowed down with pineapple and peach tones. As it develops, subtle middle notes of Water Lily and jasmine reveal, and eventually the composition dries down to sweet base notes of sandalwood, musk, and cedar.

I first tried Nautica Bleu three years after it came out. I was instantly drawn by the shape of the bottle resembling a spinnaker sail. At first spray, I smelt familiar notes: a fresh, clean, masculine, and musky scent that I get from almost all blue bottles in any brand. After a few hours, I started to like it better, and then that was it. Gone. There was a slight trail of the Blue somewhere on my clothes and my, skin but nothing striking or turning heads.

Being light and not overpowering means I can wear it in the hot and humid weather, and being so cheap (I find it for $12) means I can reapply as much as I want to. I have no trouble wearing it during the day, to work, at the gym, right after showering, or as casual wear. I, however, prefer stronger and long-lasting scents for the evenings.

There are a few men’s colognes that I found that are pretty similar smelling to Nautica Blue. Dolce&Gabanna Light Blue Intense, for example, a woody aquatic scent, opens similarly to Nautica Blue, with citrusy notes such as grapefruit and mandarin orange. Bvlgari Aqua Pour Homme is the classic fresh aquatic cologne that most blue bottles smell like and so is the case with Nautica Blue. Davidoff Cool Water is this fresh and woody cologne that reminds me of racing, sea, waves, and the ocean, that’s exactly what Nautica Blue represents.

Azzaro Chrome has also similar notes and opens with bergamot and pineapple, just like the Nautica Blue. Lastly, if you like Nautica Blue but find it a little too gentle on your skin, try Ralph Lauren Polo Sport. Its fresh, energizing, and woodsy notes will never disappoint. If you’ve tried any of these and you like the fresh and aquatic scent, you have an idea how the Nautica Blue smells. Except, Nautica Blue does not perform as well as the alternatives mentioned.

The takeaway from Nautica Blue

To sum it up, Nautica Blue is an inexpensive cologne for men that I don’t mind having in my collection. It is a safe buy, smells fresh, clean, and sporty, and it makes me smell good for a few hours without being offensive to the people in my surrounding. But unless you don’t mind reapplying, Nautica Blue’s performance leaves a lot to be desired.

Nautica Voyage was launched in 2006, a year later after the Nautica Bleu. The nose behind this cologne is again Maurice Roucel. Unlike the Aromatic Nautica Blue, the Voyage is a Woody Aquatic fragrance that opens with fruity and green top notes like apple and green leaves. There is a warm heart note of mimosa and lotus which blends well with the base notes of musk, cedar, amber, and oakmoss, leaving a heavy musky trail behind.

To me, Nautica Voyage smells romantic, fresh, sweet, and masculine, a scent I like to wear on summer nights. Surprisingly enough, it lasts me the entire evening and goes well into the morning but is much softer, almost powdery.

It is an inexpensive cologne, one I can grab when I am in a rush. It never fails to keep me fresh.

However, over the years the scent has been reformulated and while the previous bottles had a metal cap the new ones come with a plastic cap. Although they smell very similar, the performance in the reformulated is not as long-lasting as the previous batches. But I still get about 5-7 hours of freshness.

The takeaway from Nautica Voyage

All in all, Nautica Voyage is a classic fresh scent from Nautica, and at $20 it is worth a blind buy. Longevity and sillage are moderate, lasting you long enough to run errands, or go to after-work cocktails. It is not even nearly offensive, which means you can even wear it to the gym, or at your doctor’s appointment.

With all being said, now it’s time to decide which of the two best sellers is the right one to buy. Both Nautica Blue and Nautica Voyage have a strong opening, one that resembles a clean and fresh shower gel. In a few hours the Nautica Blue slowly disappears, while the Nautica Voyage lasts throughout the day and well into the night and the following morning, with no need to reapply.

When I wear Nautica Blue I feel energetic, outgoing, and sporty, I feel like going on an adventure hiking the mountains or sailing, whereas Nautica Voyage gives me a more sophisticated feel. Hence, I prefer to wear it on a romantic date, night out with friends, and at work meetings.

While both scents suit me well, I still prefer Nautica Voyage better. I fancy warm woody notes and this cologne hits those spots. It is impossible to hate, and I get a lot more compliments on the Nautica Voyage compared to Nautica Blue. What’s more, Nautica Voyage lasts me throughout the day, and goes into the next morning, without having to reapply. I wake up to a soft, musky, floral scent that I’d like to keep just a little longer before I jump in the shower.

If you are after a fresh cologne, that is safe to wear any time of the day or evening, with a good performance, and one that won’t hurt your budget, then Voyage is one of the best choices out there. It is versatile and appealing and will win you tons of compliments.