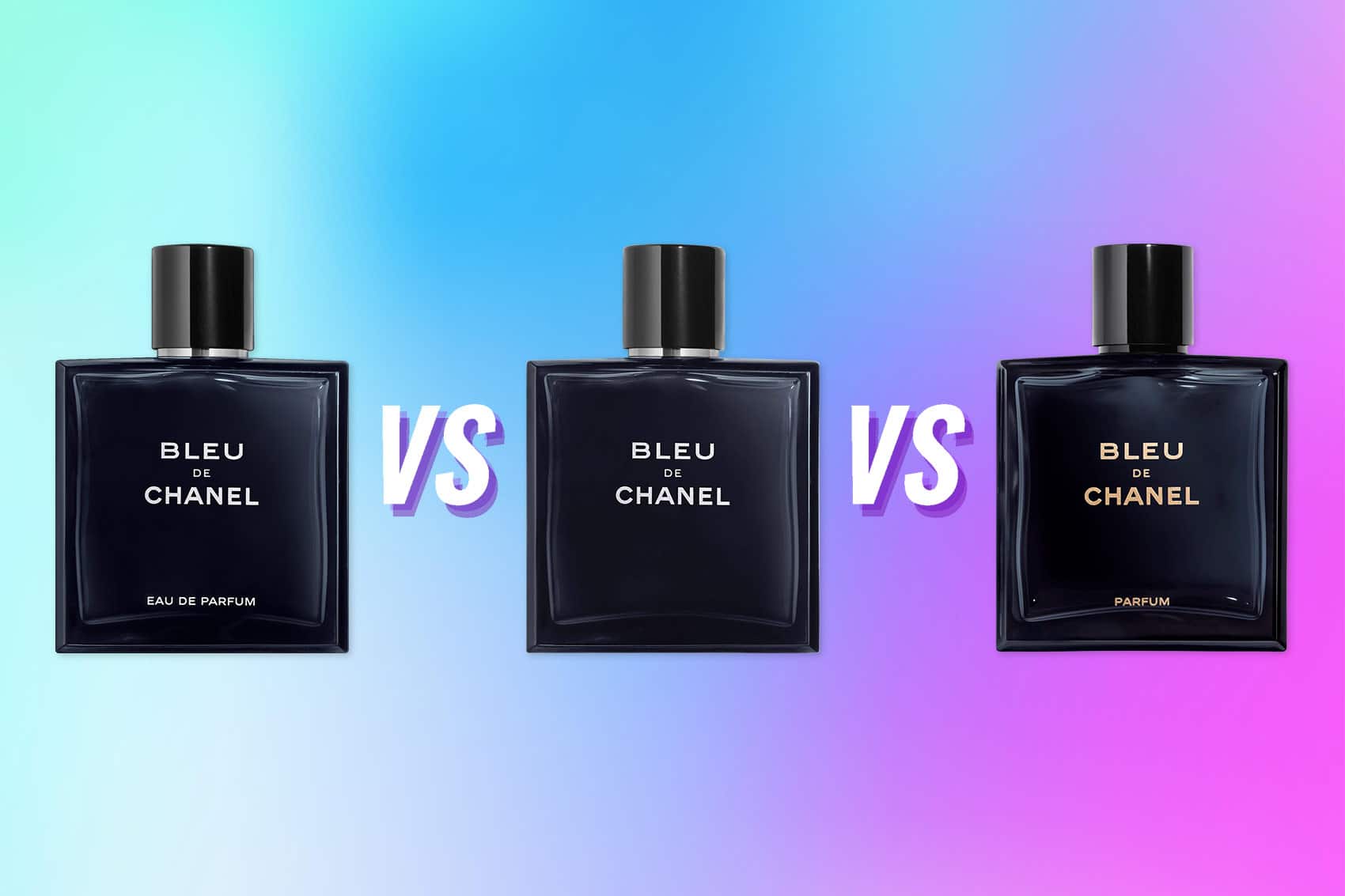 Chanel is a powerhouse when it comes to fashion and beauty so it’s no wonder that the brand’s fragrances do so well. The Bleu de Chanel line has proven to be one of the most popular men’s fragrances of recent times.

But there are three to choose from and depending on your age, situation, and personal preference, you could go for any of these.

In this guide, I aim to bring you a realistic comparison between the eau de toilette, eau de parfum, and parfum versions of this hugely successful perfume.

The eau de toilette version of Bleu de Chanel is an uplifting woody aromatic fragrance launched in 2010. The guy behind the scent, Jacques Polge, spent more than 30 years as the head perfumer for Chanel, so it’s safe to say he knows what he’s doing. This claim is evident in this composition since it’s one of the brand’s best-selling.

Bleu de Chanel EDT comes in a chunky dark blue, square bottle with simple, clear text. It’s well presented but doesn’t hint towards what you’ll find inside, which is a much more complex blend.

The fragrance begins with fresh notes of lemon, grapefruit, mint, and pink pepper. This instantly demonstrates why this fragrance so many choose for the spring and summer months.

The heart of Bleu de Chanel EDT features ginger, nutmeg, jasmine, and iso E super. If you’re wondering, that’s a synthetic note designed to have woody accords. This spicy, woody middle then leads into a very rich and complex base.

Here, you’ll find warming notes like incense, sandalwood, cedar, vetiver and patchouli alongside labdanum and the sweetness of white musk. There’s something hugely elegant and classy about this dry down but for me, it also smells incredibly alluring and sexy. This provides a really nice balance for guys who want something they can wear for all occasions.

And wear it for all occasions they will since Bleu de Chanel EDT will see you through from office hours to date night. This versatility is one of the reasons I think this makes an excellent signature scent. What’s more, it’s the most affordable in the Bleu range, so you won’t break the bank.

That said, you may need to spray a little extra throughout the day since the projection is somewhat disappointing. It’ll stay on the skin all day but beyond the first hour, it won’t cloud around you as strongly.

The EDT is the lightest and most easy to wear from the Bleu collection. It’s modern and an excellent choice for younger guys who want something versatile. My main reason for choosing this would be that it’s affordable and can be worn as a signature.

However, you should keep in mind that the performance is lacking compared to its older brothers. For many, this quickly becomes a skin scent, letting us down slightly.

An eau de parfum is slightly more concentrated than an eau de toilette so instantly you’ll notice this is much more intense than the EDT. Bleu de Chanel EDP comes in very similar packaging aside from the EDT so when purchasing, just keep an eye out for this.

Much like the EDT, this one is a woody aromatic fragrance, but there are some clear differences. For starters, there’s a much more Oriental feel to this fragrance which gives it a much more mature character. If you’re a more refined gentleman who finds the EDT too ‘youthful’, this might be what you’re looking for.

The head contains the same notes as the EDT only with the addition of bergamot, aldehydes, and coriander which gives it that slightly spicier initial hit.

If you like citrus notes, you’ll be pleased to know that these linger throughout the composition, giving me a very uplifting vibe.

At the heart, Bleu de Chanel EDP again uses the same notes but rather than the woody vibe of iso E super, we have a surprisingly melon scent. It certainly gives the EDP its own personality.

As it dries down, you’ll lose some of that projection but Bleu de Chanel EDP will last a good ten hours on the skin. At this point, notes of incense, amber, cedar, sandalwood, patchouli, labdanum, and amber wood become very obvious.

It shares some similarities with the EDT but this one is ideal for fans of amber.

Bleu de Chanel EDP is just as, if not more versatile than its younger EDT brother. While the EDT is more of a warm-weather scent, this one can be worn year-round. It’s great for both easy daytime wear and for catching attention during an evening event. The versatility is one of the things that really catches my eye about this fragrance.

Bleu de Chanel EDP is an excellent fragrance for guys with a slightly more mature taste and who want something a little more intense or luxurious. Compared to other similar scents on the market, it has a much more unique composition.

However, the downside of this is that this uniqueness has made it very popular so if you’re looking for something that not many other people wear, you won’t find it here.

On the plus side, it performs very well and will last throughout the day and into the evening so you won’t have to keep respraying. Which is a good thing since this EDP is considerably more expensive than the EDT.

The final fragrance in my comparison of the Bleu de Chanel line has a bit of twist; it was created by the original perfumer’s son, Oliver Polge, who put his own spin on this classic scent. In 2018, the new perfumer created this woody aromatic fragrance and sealed it in the same packaging as the rest of the family.

Being a parfum, this one is much more highly concentrated, and you’ll immediately notice that it’s rather intense. This makes it by far the superior choice for evening wear and special occasions. However, I may find it a little too much for day-to-day wear. Additionally, there has also been a lot of opinions going around with guys that say Bleu de Chanel Parfum is a little more feminine than the others. That’s certainly a matter of opinion, however.

Bleu de Chanel Parfum begins with lemon zest, artemisia, bergamot, and mint. There’s certainly a nod towards the others in the collection, but it’s also clear there’s a uniqueness to this perfume. I noticed a much more different blend of lavender, geranium, pineapple, and green notes at the heart.

The base of Bleu de Chanel Parfum combines a selection of accords from the previous fragrances. We find iso E super alongside sandalwood, cedar, and amberwood; woody fans will be very happy with this. To me, it smells like an autumnal walk through the forest. But, there’s a surprise, this woody character is paired with a warm, sweet dash of tonka bean, making this an even more unique scent.

In terms of performance, the parfum does well. It lasts a very long time on the skin, drying down with still some good projection. However, this projection isn’t quite as much as expected from a parfum, which is a little disappointing.

According to the brand, Bleu de Chanel Parfum is a ‘powerful and refined’ version of this classic scent. I would recommend it to a mature, sophisticated man who knows what he wants.

If you love the idea of wearing Bleu de Chanel but don’t want to follow the crowd, then I think that the unique composition of the parfum would be suitable for you. What’s great is that it’s superbly easy to wear to almost any occasion and at any time of the year.

One of the main downsides is that this one will set you back a bit of money, although it isn’t any more than the EDP and performs slightly better. Some guys may find it a little too feminine, but that’s massively down to your preferences and nose. In short, I’d say this was a great fragrance with some serious individuality.

The Verdict: Bleu de Chanel EDT vs EDP vs Parfum

I believe that all of the fragrances from the Bleu de Chanel collection are wonderful in their own right. There’s something about them that many fragrance fans hold close to their hearts, and this is why they’re a number 1 choice for fans of ‘blue’ perfumes.

Still, I would have to say that the unique scent of the Parfum sets it apart from the rest. Since Bleu de Chanel is such a popular cologne, I tire of smelling just like every other guy on the street. Bleu de Chanel Parfum allows me to be a little different without deviating too much away from the original scent.

Where performance is concerned, one thing is clear throughout the range; projection is lacking, especially for such a high-end brand. That’s not a terrible thing if you want something that isn’t cloying or overpowering. But out of all three, it’s the Parfum that performs the best, without a doubt.

Each of the perfumes in the Bleu de Chanel collection has its personality. But what stands out to me is the fresh, youthful vibe of the Blue de Chanel EDT. It is commonly referred to as ‘the original’ despite being released in the same year as the EDP. It’s everything that you’d expect from a Bleu fragrance, and many fans rave about how they receive a plethora of compliments when wearing it. It’s not in your face but still has that uplifting hit you’d want from this type of fragrance.

One of the great things about Bleu de Chanel in any of its forms is that it’s a very versatile cologne. However, Bleu de Chanel EDP is in my opinion the most versatile. While you could wear Bleu de Chanel Parfum for pretty much any occasion, its intensity may put some people off. While the EDP is just as easy to wear regardless of the time of year or where you’re going and it’s not as in your face. It’s a clear winner in this respect.
Bleu de Chanel EDT is one of the most timeless scents you will come across among fragrances. It’s one of those perfumes that people instantly recognize, and its popularity does not seem to be waning. The scent will remain a favorite for a long time to come. Additionally, you get this beautiful scent and a respectable performance for a price that isn’t as high as many other designer fragrances, so I believe Bleu de Chanel EDT to be the best value for money.

And The Winner Is: Bleu de Chanel Parfum

As much as I love every fragrance in the Bleu de Chanel line, I think there’s something extra special about the Bleu de Chanel Parfum. Its excellent performance, versatility, and uniqueness give it that little boost and set it apart from the rest.