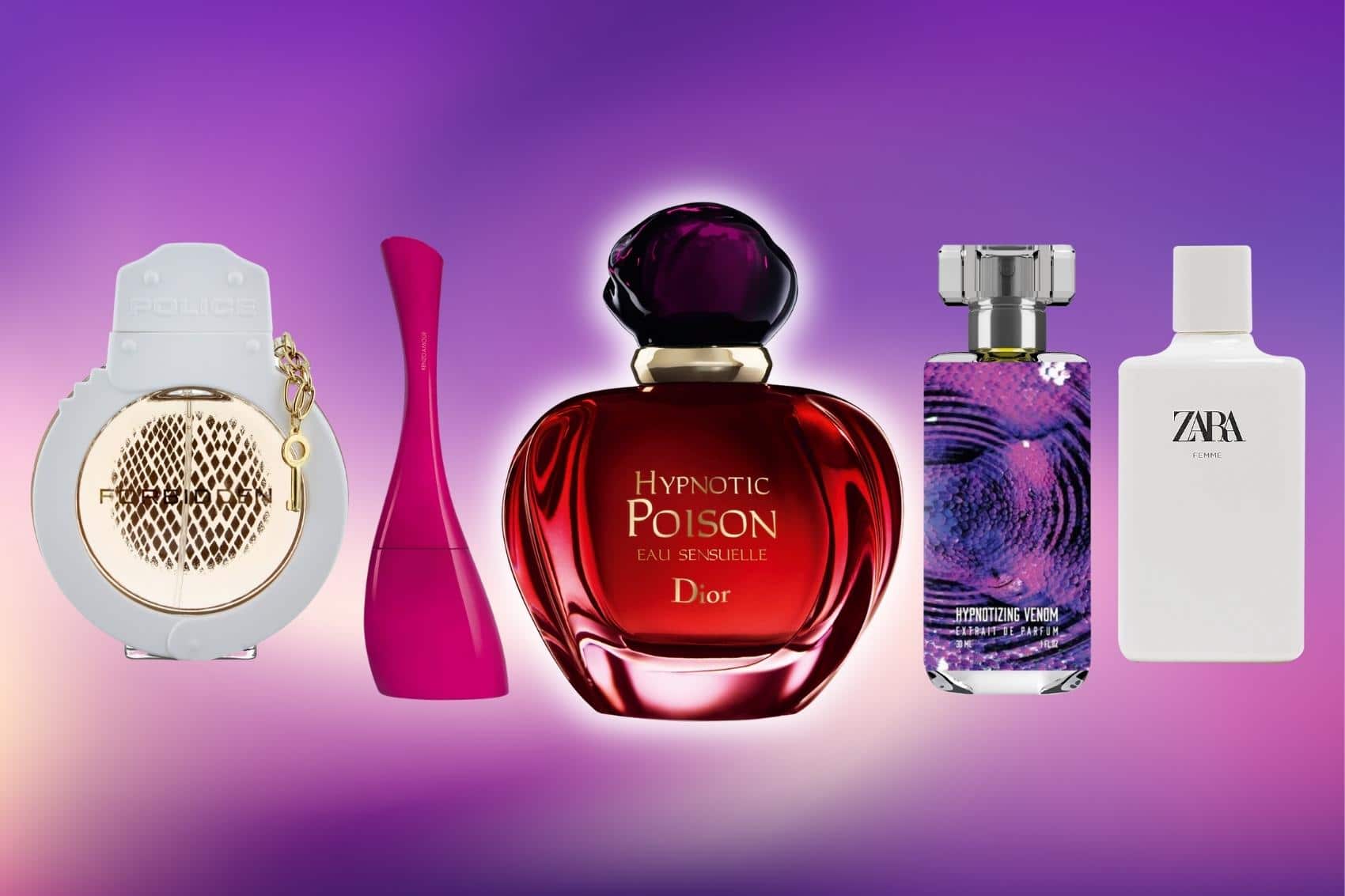 I don’t know about you, but I love a fragrance that feels cozy. Call me basic, but anything that can bring the feeling of chilly fall nights around the campfire or cuddling up with a good book is absolutely worth it. This is probably why when I first smelled Dior Hypnotic Poison, I was immediately in love. Just the smell of vanilla and almond mixed together brought a wave of autumn nostalgia to my mind.

Despite being all-in for everything comfy and warm, even I have to pause at a Dior price tag. Sometimes it feels truly unfair to feel like you have found a fragrance you can’t live without but also can’t afford. Thankfully, after researching, I found 10 fragrances that can bring me this kind of cozy vanilla warmth without killing my savings account. While they might not have the branding bragging rights, they could definitely wow any gourmand fragrance lover.

What We Are looking for in Dior Hypnotic Poison

An oldy, but a goody, Dior Hypnotic Poison debuted in 1998 and has continued to stand the test of time with its coaxing amber vanilla structure. Recently given a new life after actress Elizabeth Olsen confided that it was her signature scent, the fragrance has gained traction once again with its incredibly comforting, hyper feminine sweetness.

A fragrance perfect for fall or winter nights, you can’t help but think of crisp winds while cuddling around a campfire. The bottle design is reminiscent of an apple, which conveys the sensation of a tempting and alluring thing of fairy tales.

The fragrance opens with a splash of fruit with coconut, plum and apricot. To my nose, the coconut is one of the main scents that will hold its own throughout the whole structure, though the apricot makes for a great top scent. It then dries into a nice floral bouquet which is subtle and sweet, with rosewood, jasmine, and rose. There is some caraway also in the middle notes, which will add just the tiniest touch of spice. The base is where this fragrance really shines, with the coconut drying into vanilla and almond with a backbone of musk. The drydown has an intense warming effect that lasts for ages on the skin.

Long lasting and with great sillage, especially in its drydown, I’m sure you can see why I fell in love with the fragrance in the first place. If you are like me, you can’t always afford the luxuries of a Dior brand though, so I’ve found 10 fragrances that can fool even the most diehard Dior lovers.

Marketed as a unisex fragrance, Dua Hypnotizing Venom leans into the bitter almond notes. The opening has a bit of spice from caraway seeds, and adds sambac and jacaranda to make the fragrance a bit more masculine.

Despite its more masculine opening, the drydown is exactly what you would expect from the original fragrance. It has a full on vanilla and almond structure, and the coconut mixes in to make a creamy and light note. A hint of jasmine is detected throughout the structure, though I don’t find it very strong to my nose.

While I like that this dupe takes the fragrance out of just the feminine spectrum, I do wish it had a greater longevity. For me, it lasted for only a couple hours with the sillage being moderate.

Much more in the traditional vein of the Dior version, Women Police Forbidden focuses on the almond and vanilla aspects with a touch more gourmand. Opening with a splash of citrus with lemon, the fragrance quickly mixes with almond and almond blossom which feels warming yet refreshing with the citrus element. It then dries into a caramel and jasmine before fully settling with vanilla and sandalwood.

To me, the caramel mixed with vanilla and almond makes this a total gourmand experience. The sandalwood at the base cuts through this sweet structure and I think the opening of lemon aids in making sure the scent doesn’t become too cloying.

Incredibly long lasting and a wonderful sillage, I think this is the perfect fragrance for a winter evening out. It’s sweet, but warming, with a touch of complexity.

Bringing a fruitier element to the fragrance, Oil Perfumery transforms what I would say is a cold weather fragrance into something that could be a signature scent.

Opening with coconut, plum, and apricot, you immediately get a fruity and bright top note before drying into a bouquet of florals with a spice of caraway. The drydown is vanilla, almond, and sandalwood perfectly mixed together and with the opening of such bright fruit notes, it feels more sweet and refreshing in its final drydown.

A very creamy fragrance with the almond and vanilla notes as the main staying power, this is another fragrance that would be perfect for cold wintry nights, but could be used really at any time of the year.

4. Mmmm… Juliette Has a Gun

A more powdery take on the Dior fragrance, Mmmm seems to me to be better suited for daytime wear.

Opening with a burst of raspberry and neroli, there is a soft bouquet of orange blossom, iris, and jasmine in the middle note before drying down into vanilla, caramel, and sandalwood.

Although missing the warming almond notes of the original, I quite like that there is more staying power with the florals in this fragrance. I think it elevates the scent to be a bit more versatile. While I think the Dior original is best suited for night wear, I think Mmmm has the ability to be worn around the office without completely overpowering.

Although a bit more expensive than the rest of the fragrances on this list, I find Kenzo Amour to be incredibly worth it, and still a fraction of the Dior price.

Incredibly creamy and smooth, the main notes that are distinct throughout the fragrance are vanilla and sweet almond. The fragrance opens with a note of white tea and rice which feels refreshing and cuts through the overall gourmand-oriented scent. The drydown has musk mixed with the vanilla, so the overall sense is a warming, yet bright structure with the white tea element.

Another fragrance that I think can definitely be a signature scent, Kenzo Amour is long lasting and I find that the sillage holds all the elements of the structure very well.

Definitely a deep gourmand structure, Divian really leans into the winter night vibes with this sweet and warming fragrance.

Opening with a bitter licorice and almond, the fragrance dries into arabian jasmine and orange blossom, before settling into tonka bean and vanilla.

An overtly almond and vanilla fragrance, the licorice in the opening adds just a touch more gourmand to the entire structure. I find this fragrance to have less longevity than the original, though the sillage has a long reaching effect.

Perhaps the winner for being the most affordable on this list, don’t be fooled by BC’s price and compact design. Mixing the gourmand notes with a more floral structure, to my nose the main scent in this fragrance is the bitter almond.

The fragrance opens with deep fruit notes that feel juicy and refreshing, but then it quickly dries into an almond, caramel vanilla. What I like most about this fragrance is that it is incredibly long lasting and the sillage of almonds is very moderate.

Although I wish some of the notes lingered a bit more in the overall structure, I find this fragrance to be the more practical of the bunch if you are looking for something affordable yet comparable to the Dior fragrance.

Another fruity meets vanilla style scent, Tesori opens straight away with the almond note and mixes it with a burst of apricot. The fragrance then dries into a bouquet of jasmine, orange blossom, and ylang-ylang before settling into vanilla, sandalwood, and musk.

If you were someone who really liked the notes of the Dior original but wanted maybe the overall structure to be a bit more subtle, this is the fragrance for you. To my nose, this fragrance has a much lighter, airy-ness to it that I think elevates it to a great contender for a signature scent.

Although the longevity leaves something to be desired, this fragrance is one of the most affordable on the list and is easily compatible to reapply throughout the day.

Hailing from the popular and affordable fashion retailer, Zara Femme brings a lighter, daytime twist to the original fragrance.

A vanilla heavy scent, I find this fragrance is reminiscent of vanilla macarons with how subtle the almond aspect comes out. The opening has a splash of bergamot and peony, and the drydown is a nutty, deep vanilla mixed with musk.

$16.40 at Amazon.com
at Perfume.com
at Fragrancenet.com

Fleur de Femme really showcases its fruit element in its structure with the distinct note of sour cherry throughout. If you wanted something a bit more candy sweet rather than mature-sweet, I think this is a great contender. It opens with almond and cherry and quickly dries into sandalwood and jasmine, before settling on the skin with vanilla and musk.

Like I said before, this is a cherry meets vanilla and almond combo which to my nose makes this a very sweet and bright fragrance. Another younger-smelling fragrance, I think Fleur de Femme will do best in fall nights where the cherry and almond can really shine.

On a Final Note

Dior Hypnotic Poison has become a timeless classic for those who want a bit of mature sweetness in their lives. A deeply comforting fragrance, it’s no wonder so many people have come back to it again and again. There’s just something so alluring about the mixture of vanilla and bitter almond which calls back to warming and cozy nights.

Since we can’t all afford to buy this 1998 classic, we are luckily not the only fans wishing for a more affordable comfort fragrance.

From elevating the notes to bringing twists on the original classic, these 10 dupes certainly are able to fill Dior’s shoes with a sensually warming scent that can keep me cozy all year-’round.