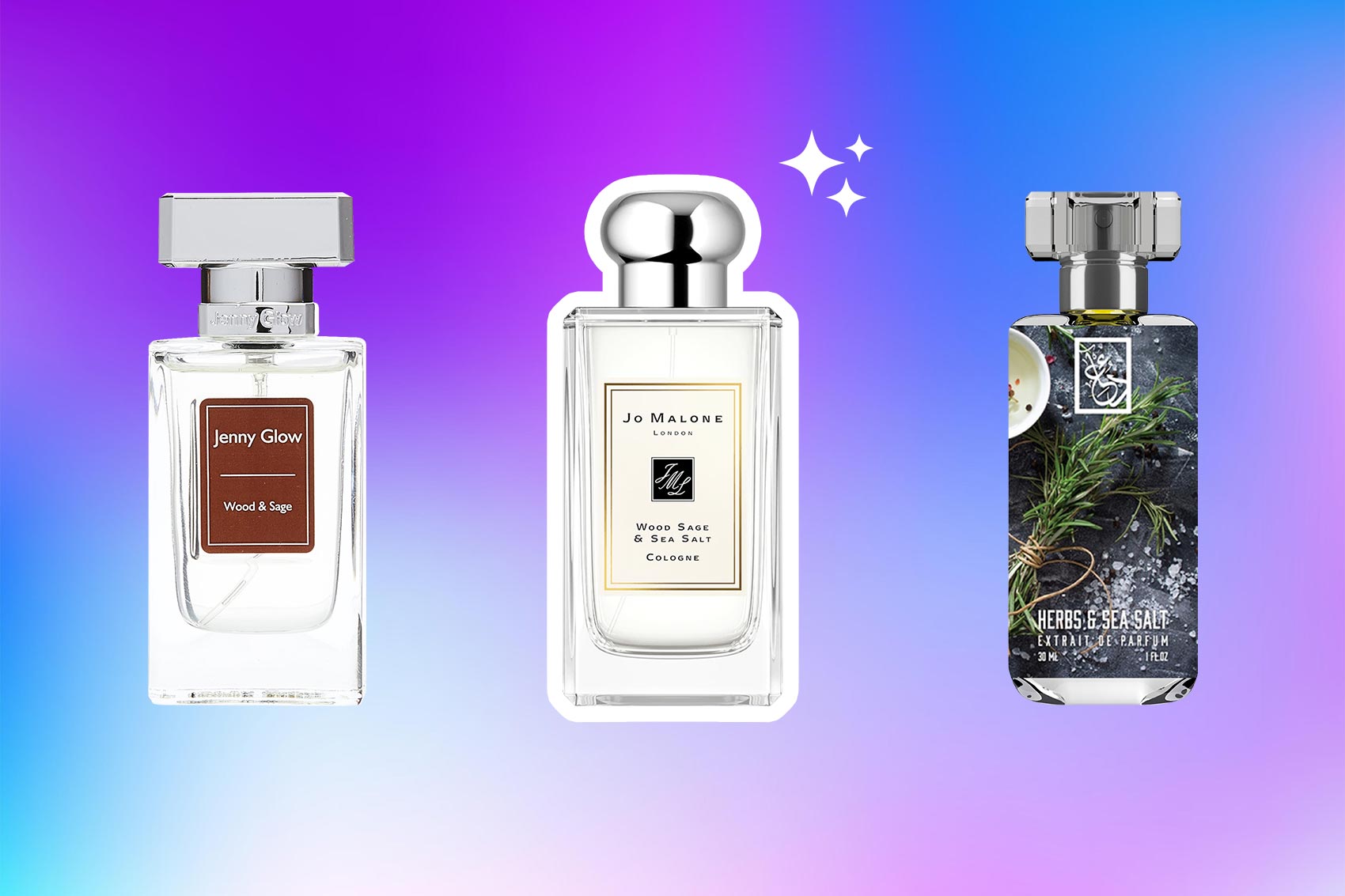 Jo Malone’s Wood Sage & Sea Salt has a special place in my heart as one of my most nostalgic fragrances of all time. I first came across it when I moved to the south of France and a new colleague offered to grab a drink with me after work. After a couple of hours of chatting and enjoying the fresh, cool scent of sage and ambrette, I had to ask her (embarrassingly) what fragrance she was wearing. Today, Wood Sage & Sea Salt is still my go-to scent for laid back days in the sun.

If you are like me and yearn for that fresh, breezy feeling in a fragrance, but don’t want to shell out the cash on its price tag, no worries. My love affair (and yours) with Wood Sage & Sea Salt of Jo Malone can continue despite life’s budget cuts with these perfectly refreshing clones.

What We’re looking for in Wood Sage & Sea Salt

Debuted in 2014 alongside its own bodycare collection, Jo Malone Wood Sage & Sea Salt became an instant fan favorite for its versatility. A fragrance for both men and women, Jo Malone initially focused their campaign on its ability to mix with other fragrances on their line but quickly found the fragrance alone was just enough to become a signature scent for both sexes.

Inspired by the beaches of Britain, the fragrance strives to capture the light sea air mixed with mineral sand and herbal elements. When I tried this perfume for the first time, I was reminded of a soft spring or summer morning where a light wind from the ocean was refreshing and calm. To me, it’s the perfect light, cozy fragrance that I can wear around the house or out with my friends.

The fragrance opens with sea salt and a splash of grapefruit that adds just a touch of citrus and fruit to the overall marine structure. It then dries down into an earthiness of ambrette seed, red algae and amber wood which to my nose brings the perfect mix of sweetness and aromatics. Sage mingles at the base of the fragrance, which ties the whole experience together with its earthiness.

They don’t lie when they say this fragrance is light. Unfortunately, my only big complaint is that its longevity leaves a lot to be desired. Still, despite this, I have a hard time passing up a scent that can literally make me feel like I’m lounging in an ocean breeze every day. The bottle is also a bit simple with just a glass cubic structure, but it is a good design for a unisex fragrance that both men and women can use.

So, what’s the catch? Well, unfortunately, Jo Malone’s prices might as well buy you a trip to an actual beach. Lucky for us, many duplicates and clones have tried to bottle the same beach vibe, and to make your life easier, I’ve done the work to find the dupes that can get you smelling the sea in no time.

Jenny Glow is a clone house specifically inspired by Jo Malone, so it’s not surprising that their version of the most popular fragrance would be a hit. A fraction of the price, Jenny Glow hits all the same notes as the original with only slight differences.

To my nose the opening has more of a bergamot note than grapefruit, but overall the citrus mixed with sea salt structure is still there. The sage really comes through in the drydown bringing a pleasing earthiness, and overall, I find this fragrance to be just a touch less sweet than Jo Malone.

Probably the biggest plus in my opinion is the longevity, which is longer than the original but still light enough not to feel like the fragrance was concentrated. Also, the bottle looks identical at a glance to Jo Malone’s, which I think is a fun touch, especially if you are into having a display shelf.

A popular dupe house for its adaptivity, Herbs & Sea Salt by The Dua Brand tries to combat the complaints over Jo Malone’s longevity by creating a scent that is more potent.

Certainly a stronger scent, Dua’s fragrance opens with a tart grapefruit note mixed with sea salt and earthy ambrette. The dry down is centered in the sage and adds a musk mallow which to my nose really amps up the sweetness in this fragrance.

Being a concentrated formula, Dua’s version will last longer but, in my opinion, loses some of that lightness that came from the original. But, being one of the more expensive dupes on this list, I would say that if you want a bit more punch in your perfume, this dupe is worth the money.

I might be biased, but I feel like you can never go wrong with a Dossier dupe. Vegan and cruelty-free, Woody Sage is as soft and refreshing as the original while giving some extra layers that I personally enjoy.

The fragrance opens with a bit of fig mixed with the grapefruit, setting this fragrance into a more sweeter tone at the start, but then quickly dries down into a lovely amber and sage that has a nice sensation of driftwood.

The earthiness and mineral notes from the sea salt really come through in this fragrance and can sometimes feel a bit more masculine to me, but overall I think it walks the unisex line very well. Unfortunately, this fragrance will last the same amount as Jo Malone’s original, but for such a good price, I really can’t complain.

Another great choice if you are looking for anything vegan and cruelty-free, Alt Driftwood is fresh and crisp like the original, but with a touch more sweetness.

The opening has a bit of a metallic feel to it with an emphasis on sea salt, but it quickly dries down into grapefruit, sage and musk. The grapefruit lingers for me throughout the fragrance which overall makes this a bit sweeter than Jo Malone.

To my nose, it brings off a mellower scent than what you would originally find, but still holds that cozy, freshness I’m looking for.

The most practical dupe on this list, Oil Perfumery Wood Sage & Sea Salt comes with a rollerball application which makes this fragrance very easy to reapply and carry with you throughout the day.

With increased longevity than Jo Malone, Oil Perfumery hits all the same notes as the original with only slight touches that make it less complex to my nose. Unlike most of the other dupes on this list, I find that this fragrance is less sweet than Jo Malone, leaning more into the mineral earthiness of the sea salt and sage.

Overall, I think this one really leans into its unisex marketing, but in a good way.  With the airyness of the original, it’s a perfect fit for anyone looking for a sea breeze on the go.

A dupe line that gained popularity on the shelves of Urban Outfitters, Gourmand Sel Océan keeps the marine freshness but adds just a tiny amount of white florals.

Sold as a hair and body spray as well, Gourmand’s fragrance has excellent longevity and brings notes of honeysuckle and lily of the valley to the structure, though at points hardly noticeable. This fragrance feels sweeter and more feminine than the original.

For me, if Jo Malone was going for the rocky beaches of Britain, Gourmand was aiming for the sandy shores of the gulf. While both hit the same salt and sage notes, Gourmand’s floral notes give it a slight edge.

This dupe line seems to be a bit of a mystery. Still, I was pretty intrigued by this Wood Sage & Sea Salt-inspired fragrance.

To my nose I get small hints of fresh linen throughout the fragrance which overall keeps the structure of airiness, but does take away from the earthiness of the sage and red algae. But, the structure from Jo Malone is still perfectly intact, and with greater longevity, I think it is still worth the try.

Jo Malone’s Wood Sage & Sea Salt became a favorite amongst men and women alike for obvious reasons. With its versatility to be worn at home and as a signature scent, I’m sure it will continue to be worn for its ability to transport anyone straight to the rocky cliffs of a seaside villa.

I’m honestly shocked at how well the inspired fragrances could hold up to the uniqueness of the original and even happier with how many of the dupe houses looked for ways to improve upon an already stellar scent. I can’t imagine there will ever be a day where someone doesn’t want an essence of sea breeze in their life, and thankfully it’s good to know that dupe houses feel the same way. So many of these fragrances are affordable and versatile, and there’s no reason not to try them all until you find your perfect day at the beach.