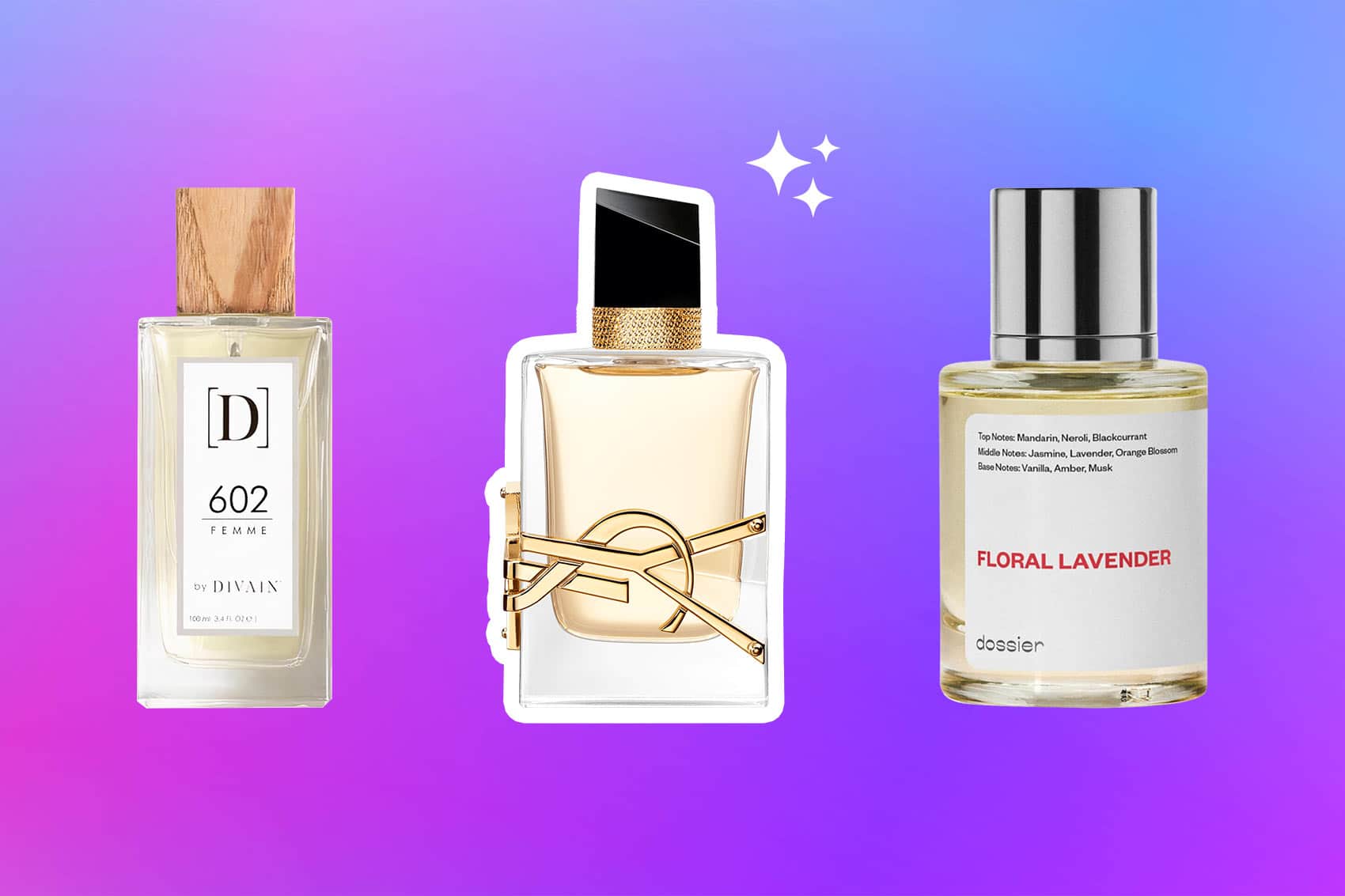 When Yves Saint Laurent Libre launched in 2019, I knew I immediately had to try it. I’ve always been a fan of floral fragrances, and immediately upon using YSL Libre, it did not disappoint.

So to me, it’s no wonder there have been so many dupes and clones made to recreate one of the hottest fragrances of the past couple of years.

In this guide, I’ll share my favorite YSL Libre “smell alikes” so you can experience the buzz without shelling out tons of cash.

What YSL Libre Is All About

Debuted in 2019 and winner for best perfume in 2020 by the Fragrance Foundation, YSL Libre came on the fragrance scene ready to impress. With a large campaign with singer Dua Lipa as the face, the perfume quickly started to turn heads as the next fragrance to own.

Meaning “free” in French, the fragrance was intended to inspire an essence of limitlessness for the modern woman. Yves Saint Laurent wanted a fragrance that could be a signature scent that evoked both sensuality and a lightness of the everyday.

When I tried this perfume the first time, I was reminded of a crisp fall or spring day where you can feel change in the air. If YSL was going for freshness, I think they were pretty spot on.

The fragrance opens with a bit of citrus from mandarin orange, but quickly settles into the calming white florals or lavender and jasmine. In the dry down orange blossom and Moroccan vanilla really shine and settle into a sweet floral mixture, which to my nose is mostly a lavender essence. An extremely calming and sweet fragrance, I find the lavender heavy base can sometimes feel androgynous but mixed with the orange blossom and vanilla finds its way back to a light feminine spot.

According to my experience, this is a strong fragrance with good longevity and sillage, perfect for anyone who needs a signature scent but doesn’t want endless reapplications. The bottle is beautiful as well, with a golden YSL logotype bent around a cubic bottle.

So, I know what you’re thinking. What’s the catch? Well, unfortunately, the YSL logo comes with a hefty price tag. Lucky for us, many duplicates and clones have hit the market since YSL Libre’s release, and to make your life easier, I’ve done the work to find the dupes that stand up to the original and some similar fragrances that might just do the trick as well.

I can’t lie, I’ve been a skeptic of Zara’s dupe line before, but Golden Decade finally sold me on this fashion brand’s fragrances. A fraction of the YSL price, Golden Decade surprisingly brings the longevity and sillage of the original Libre and holds its own.

If you thought YSL Libre was lavender-driven, be ready. Golden Decade definitely isn’t trying to skimp on the white florals. Since the florals are front and center, my nose finds it hard to find the citrus opening, so be aware that this is a lavender all day situation. The vanilla will come through in the dry-down, giving the structure a sweeter side.

Overall, Golden Decade seems a little less complex than YSL Libre, but I would bet money only seasoned noses might be able to spot the difference between Libre and Zara’s counterpart. With a price tag that low, there’s no reason not to at least give it a chance.

A clone house growing in popularity, Divain’s take on Libre (also named Libre) hits all the same notes as the original with just very slight differences. The citrus opening is replaced with tangerine in Divain’s fragrance which has just a subtle amount more sweetness to it for me. Still, overall the structure of lavender, vanilla, and jasmine really holds up in this fragrance.

It is a very intense fragrance, I don’t think you will need any reapplications during your day, but I still find the essence fresh and airy despite its stronger intensity.

Divain Libre doesn’t have the same layered complexity as YSL, but overall, this fragrance hits all the essential parts of the structure to make it a pleasing YSL Libre dupe fragrance.

Dossier has become my favorite clone house recently not only because they are vegan and cruelty-free but also because I think they can nail the layered subtleties of their inspired fragrances pretty well. Dossier Floral Lavender doesn’t disappoint.

Perfectly named, Dossier Floral Lavender really knows how to mix the lavender and vanilla notes from Libre. My nose has a harder time detecting jasmine in the bouquet, but the citrus opening  with mandarin and orange blossom is definitely a mainstay from Libre.

Dossier did well because this fragrance mirrors how androgynous Libre could be with its lavender base. While some may think of this as a drawback, I like this type of versatility in a fragrance, so I’m pretty happy to see Dossier kept true to this aspect of their inspired fragrance.

Tying with Zara’s Golden Decade for cheapest on the list, Oil Perfumery Libre is a sweet and simply inspired fragrance that has practicality in mind. My nose finds the fragrance to be a little fruitier than YSL Libre, though just a touch. The stronger mandarin opening adds a bit more sweet citrus to the build, but then the dry-down is perfect with its lavender and white floral bouquet.

It might not be for everyone, but I kind of like that Oil Perfumery Libre comes with a rollerball application. The bottle itself is compact and easy to carry and makes this fragrance an easy pick for anyone on the run.

The newest dupe I found to hit the market and also vegan and cruelty-free, Alt Liberty has all the same fragrance notes as YSL Libre but with just a touch less intensity and warmth.

I found this fragrance to have the same notes, except for the vanilla base, which makes this fragrance a bit less sweet and more floral heavy than the rest.

Still, the white florals really come through, and there is a touch of orange to create the same citrus opening as YSL Libre.

You can imagine my delight when I went into Mango to discover this remarkable Libre clone. OK, it’s not quite as intense in terms of projection but the scent does last for hours on the skin.

I love how close to the original this is. In fact, if I had blind smelled it, I’d never have been able to tell the difference. With notes of musk and white florals, I really felt as though I was dousing myself in my favorite YSL perfume! And the best bit? It cost me no more than a cup of coffee and a sandwich on my lunch break!

Looking for Something Similar But Not Exactly YSL Libre?

If dupes aren’t your thing or you simply want to try a new fragrance that keeps the same structure as YSL Libre, here are some good honorable mentions to consider.

at Amazon.com
at Fragrancenet.com

A great feminine floral fragrance by Guerlain, Mon Guerlain Florale, compares to YSL Libre in the lavender and vanilla department, but has a slight more maturity to my nose than Libre. There’s a strong lemon zest in the opening and Florale’s dry-down is floral forward with hints of peony as well as jasmine and, of course, lavender.

Overall, I think this fragrance is a great choice if you liked YSL Libre, but was looking for something a bit more mature and grounding. The vanilla-lavender combo in Florale has less of the androgynous appeal of Libre and bases itself strongly in the feminine.

I should say, this is one of the more expensive items on this list, so if budget is an issue, maybe consider your options, but the bottle is a beautiful light pink in a rose-gold accented bottle, so if you have the itch to splurge, this is a good pick.

A good cousin fragrance to YSL Libre, Carolina Herrera is similarly structured with less of the soapy calming nature. Good Girl opens with hints of citrus, jasmine, and almond, leading to a more sweet overall structure. This fragrance is an excellent pick if you want to tone down the florals, as I think Good Girl does an excellent job of mixing the white florals with other more grounding elements like coffee and cocoa.

The only drawback is longevity and sillage, which YSL Libre just does slightly better–still, Good Girl is an excellent option for anyone wanting a bit less lavender and soapiness from heavy florals.

Also, the bottle itself is a stunner with a black and blue stiletto heel design.

Good Girl is definitely one of the more expensive options on this list, but in my opinion, is worth the try.

Yves Saint Laurent Libre is a fairly new fragrance that I think will last on the market for a long while. With its versatility in all seasons, it’s a perfect signature scent that I’m sure will be continued to be applauded for its airy and contemporary use of florals. On top of its celebrity-studded marketing campaign and its chic bottle design, I’d bet that Libre will be a fragrance we will want to continue wearing for years to come.

I’m pleasantly surprised at how well the inspired fragrances could hold up to the original and even happier with the subtle changes these fragrances bring to the table. I’m sure there will be no shortage of inspired fragrances in the future, but it’s good to know that you can smell like the newest “it” fragrance without having to break the bank. Since so many of these fragrances are affordable, easy to find, and smell great, there’s no reason not to shop around and see which one is perfect for you.