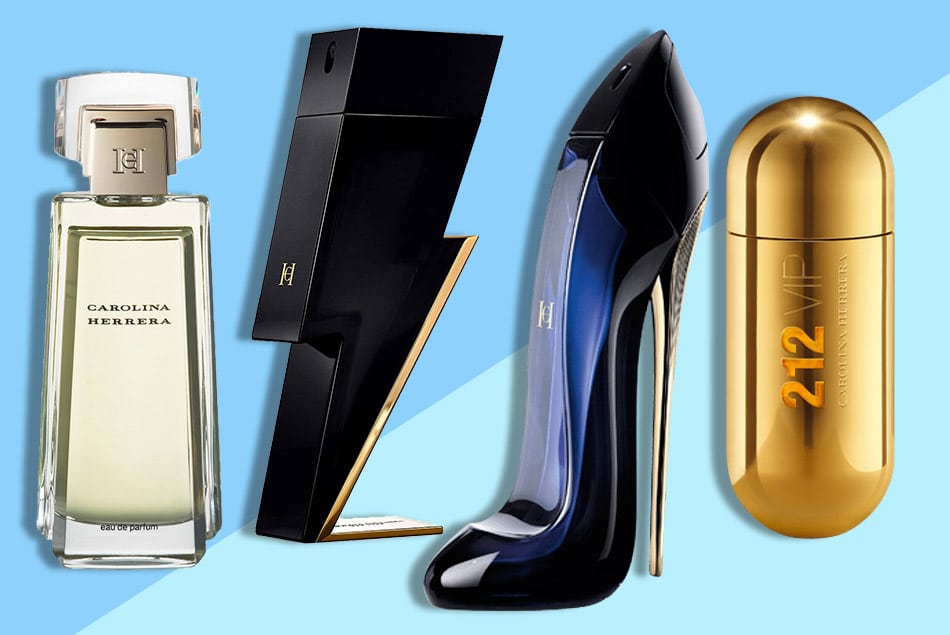 Carolina Herrera perfume collection has been crafting gorgeous fragrances for men and women since the late eighties. During that time, they’ve created perfumes to fit every scent profile, lifestyle, and aesthetic form imaginable. In fact, they’ve designed an eye-popping total of 137 fragrances.

In this review guide, you will find the one that fits you rightly. If you’re here for quickly finding the absolute best Carolina Herrera perfume, then surely take a look at the following top picks.

Carolina Herrera Good Girl is a cult classic women’s fragrance. Its unique and distinctive shoe-shaped bottle embodies elegance all by itself, but once you unleash the fragrance, you experience even greater luxury.

Perhaps because of the expansive note list, Carolina Herrera Good Girl has an exceptionally strong sillage. It’s a definite head-turner, which makes it perfect for romantic occasions where you want to exude confidence and seduction. The scent also lasts an extremely long time, with most wearers reporting wear times of six hours or more.

Released in 1988, Carolina Herrera by Carolina Herrera is one of their oldest and most enduring fragrances. This delightfully fresh and feminine perfume starts with tender notes of apricot, orange blossom, bergamot, rosewood, and varied green notes like dewy leaves and fresh grass. Middle notes include honeysuckle, Indian tuberose, jasmine, ylang-ylang, narcissus, and lily of the valley, with a dash of purple hyacinth to give the fragrance variety and depth. Musky base notes of sandalwood, amber, white musk, and oakmoss temper this scent’s fruity-floralness.

Most Carolina Herrera scents have exceptional longevity, but this scent outlasts them all. The consensus is that Carolina Herrera by Carolina Herrera can last all day, and even longer in some cases. Its emphasis on florals, especially tuberose, make it ideal for moments when you want to feel beautiful and feminine. Due to its exceptionally heavy sillage, we recommend it for outdoor events in cooler weather.

This is the scent that started the famous 212 line. 212 for Women is a bright, lively scent that embodies the spirit of New York. It opens with zesty top notes of orange flower, cactus flower, bergamot, and mandarin orange. These gently blend into floral middle notes of white camelia, lily, gardenia, freesia, jasmine, peony, and rose. Base notes of white musk and sandalwood leave the skin with an earthy and heady fragrance.

Like most floral perfumes, 212 for Women has a pleasing, moderate sillage. This means the scent is noticeable without being sickly or overpowering to those around you. This, as well as an average wear time of six to eight hours, makes it a perfect “everyday” perfume. We especially recommend it for the summertime, thanks to the dominant notes of citrus and white flowers.

Like its feminine counterpart Good Girl, Carolina Herrera Bad Boy has an eye-catching bottle. In this case, it’s a jet-black lightning bolt that hints at the dynamic, energizing fragrance inside. The first spritz releases top notes of bergamot sprinkled with black and white pepper. These quickly give way to earthy middle notes of sage and cedar, then heady base notes of tonka, amberwood, and cacao.

Also, like Good Girl, Bad Boy is an ideal “date night” cologne. The tonka and cacao make it especially powerful during fall and winter, as they bring coziness and comfort to chilly weather. Its moderate sillage and moderate-to-long longevity are two more points in this fragrance’s favor. You’ll smell noticeably transcendent all day or night long.

CH has been a mainstay in the Carolina Herrera fragrance line since it launched in 2007. It’s a classy scent that begins with fresh and watery top notes of bergamot, grapefruit, lemon, and tropical fruit. The citrusy blast gradually gives way to mellow, floral middle notes of jasmine, African orange flower, cinnamon, rose tincture, and praline. The overall scent blend is held together by musky, earthy base notes of sandalwood, patchouli, cashmere wood, cedar, musk, leather accord, and amber.

CH is versatile, beautifully-scented, and long-lasting. It has a soft and inoffensive sillage that makes it perfect for the office, church, and other routine activities.

212 is one of Carolina Herrera’s most expansive and popular fragrance lines, and scents like 212 for Men are a great example of why. This clean, aquatic body spray contains refreshing top notes of lavender, petitgrain, grapefruit, and bergamot. Earthy and floral middle notes of ginger, gardenia, violet, and sage give the scent more depth and dimension. Upon dry-down, base notes of incense, vetiver, sandalwood, and guaiac wood unfurl.

Though its sillage is moderate, this is a hardy blend that can last all day long. 212 for Men is a fantastic summer fragrance, thanks to its bevy of clean, watery, and green notes. We also recommend it for a quick spritz after the gym or other physically laborious activity. It brings coolness and refreshment to the skin, and often leaves behind summery scents of the sea and citrus groves.

at Amazon.com
at Perfume.com
at Fragrancenet.com

CH Men Prive is a rich oriental cologne with a citrusy edge. It opens with a splash of pomelo and grapefruit rounded out by a sharp bite of whiskey. These top notes blend into powdery middle notes of lavender, sage, red thyme, and cardamom. The fragrance takes its final bow with creamy base notes of leather accord, benzoin, and tonka.

The whiskey, spices, and gourmand base notes make this a perfect cologne for cold weather. It has decent longevity – most wearers report wear times of at least five hours, often more – and its sillage is on the softer side for the Carolina Herrera line. This makes CH Men Prive an excellent choice for everyday wear, since it can hold up to everyday tasks without overwhelming sensitive noses around you.

The glossy golden perfume bottle sends an unmistakable message: this is an A-list fragrance. 212 VIP stands out among other Carolina Herrera scents because while most of them are woody or floral, this one prioritizes sweet and gourmand notes. It begins with top notes of juicy passion fruit and savory rum, which blur into middle notes of gardenia and musk. Creamy base notes of vanilla and tonka bring the fragrance full-circle and end it the same sweet, sugary way it began.

This is a warm and toasty fragrance that pairs well with fireside chats, holiday parties, and other wintry activities. It’s one of Carolina Herrera’s more fleeting perfumes, but its sillage is on the stronger side. 212 VIP is sure to leave an impression with everyone you encounter, no matter how briefly.

This aptly named women’s fragrance is a love letter to delicate florals. It opens with decadent splashes of rose, tuberose, and red freesia. After a while, middle notes of orange blossom, freesia, and lily of the valley open and unfurl, making this flowery scent blend even more fragrant. Chic ends with rich and creamy base notes of sandalwood, vanilla, and white musk.

The floral notes here are very strong and carry quite far, so it might not be the best fit for everyday wear if your coworkers or family members are sensitive to scent. However, it’s a perfect match for outdoor activities. The strength and longevity hold up well to the elements and hot weather, ensuring you’ll smell great all day long.

10. Herrera for Men by Carolina Herrera

This men’s cologne is a blend of florals, citrus, and woods. Top notes of rosemary, lavender, lemon, and neroli open the fragrance with lively freshness, while middle notes of clove, geranium, and clover add earthiness and spice. The blend exits with base notes of sweet ambergris, smoky tobacco, and rich sandalwood.

Due to the floral and citrusy notes, this scent has sometimes been compared to a more robust and mature Sprite or 7-Up. It makes for a refreshing splash on hot summer days. The woody notes, especially the tobacco and sandalwood, give the scent a little more versatility so it can be worn on colder days as well.

Now you know more about Carolina Herrera fragrances, and you probably have an idea of what you’re looking for. But how can you narrow down your options and find that one perfect scent?

How to Choose Your Carolina Herrera Perfume

Use these tips to bring home the Carolina Herrera scent that matches your requirements and preference.

Find the right scent composition for your preferences

Not all perfumes are created equal in terms of strength and sillage. You can determine the strength and sillage of perfume in the Carolina Herrera collection by following the terms “Eau de Toilette” and “Eau de Parfum”. Both refer to a difference in perfume oil concentration, and therefore they own a different strength, longevity, and sillage.

Eau de Parfums have a higher concentration of perfume oil than Eau de Toilettes. They’re typically 15% to 20% fragrance oil. If scent sensitivity isn’t a concern for you, Eau de Parfums are a perfect choice, as they deliver all-day strength and performance.

Eau de parfums in the Carolina Herrera collection include:

There are four main scent families used to classify perfumes: fresh, floral, woodsy, and oriental. A fragrance can often be included in multiple families depending on the blend of notes used to create it.

Which Carolina Herrera perfume is the best?

Yes, Carolina Herrera perfumes are cruelty-free as they don’t test on animals.

The Story of Carolina Herrera

Carolina Herrera is a famous designer from Venezuela. In 1980 she started selling high-fashion items ranging from coats and ballgowns to accessories like belts and scarves. These items garnered worldwide attention quickly, and Herrera was tasked with dressing some of the wealthiest and most fashionable women in the world, including several First Ladies of the United States.

The Famous Faces of Carolina Herrera

Carolina Herrera’s fashion designs have appeared on elite women including, but not limited to:

An Era of Aroma

Inspired by the success of this first perfume, Carolina Herrera quickly expanded its fragrance line to include new collections, all of which are constantly updated with innovative limited edition and mainstay fragrances. You can learn more about each of these collections in the “Carolina Herrera Fragrance Collections” section below.

Carolina Herrera has worked with some of the finest and most illustrious perfumers, including:

Carolina Herrera 212 is a youthful and vibrant collection that captures the spirit of New York through its scents.

Note: The 212 collection alone contains over 100 fragrances, many of which were limited edition. For the sake of brevity, we selected only the most popular ones to highlight here. We also only highlighted 212 fragrances that are still available for purchase today.

Elegant, classy fragrances with an emphasis on florals and subtle spice define the CH collection.

Sexy and alluring women’s fragrances in distinctive shoe-shaped bottles, that is what the Good Girl collection of Carolina Herrera is all about.

The Herrera Confidential collection consists of luxurious perfumes inspired by and centered upon a single note.

Carolina Herrera has established itself as a premier luxury fragrance brand. Millions have loved their perfumes for over three decades. We hope you use this guide to find your new favorite Carolina Herrera fragrance.