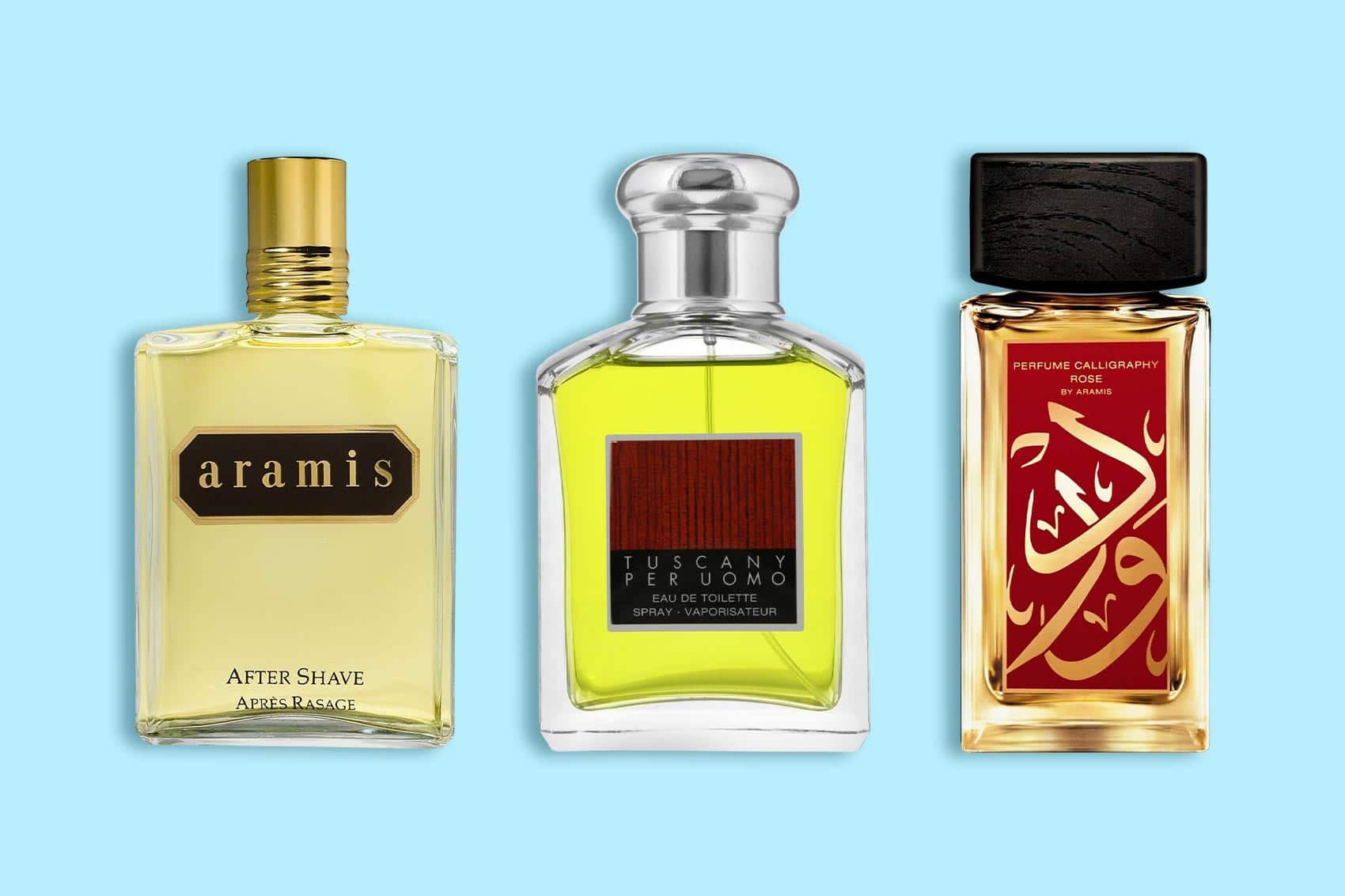 Aramis has been releasing high-quality scents since the early 1960s. Originally a men’s-only fragrance house, they’ve since expanded to offer gorgeous feminine fragrances for women alongside their traditionally masculine colognes. This guide will help you navigate their extensive product line to find the right scent for any situation.

Here is our review of the ten best Aramis scents. You’re guaranteed to find the one that fits your tastes, needs, and lifestyle.

Introduced in 1984, Aramis Tuscany is a luxurious men’s cologne inspired by the emerald hills, vibrant fruits, and calming blue waters of the Mediterranean. People love it for its robust and full-bodied scent. The first spritz releases sharp citrus notes like grapefruit, lemon, and lime, all underpinned by subtly sweet lavender. These give way to middle notes of anise, caraway, tarragon, and orange blossom, all resting on a musky, slightly spicy bed of oakmoss, basil, and leather accord.

This is a classically masculine fragrance for times when you want to project strength, resourcefulness, and steadfastness. Just one or two sprays is enough to last a full day, attracting attention all the while.

This is Aramis’s signature fragrance. It’s been in production for over fifty years. The top layer sparkles with clean, zesty notes like clover, bergamot, and thyme, which blend into earthy middle notes of sage, orris root, and patchouli. After several hours of wear, the cologne takes a final bow with base notes of sandalwood, vetiver, and amber.

Aramis is a fresh and regal cologne that gives powerful, long-lasting performance. The scent may read a little “mature” to some, so we recommend it for older men who want to make a splash everywhere they go. Its green, grassy undertones make it a perfect match for outdoor events, especially in the spring and summer.

While Aramis doesn’t offer many feminine fragrances, when they do create one, they do it beautifully. Aramis Calligraphy Rose is a gorgeous women’s perfume released in 2013. It’s elegant red and gold bottle houses spicy and floral notes of honeysuckle, saffron, and oregano. Lush, herbaceous middle notes like Turkish rose, lavender, and myrrh form the heart of the fragrance. Calligraphy Rose leaves the skin kissed with base notes of ambergris, labdanum, and musk.

This rich, complex scent gives its wearer an air of class and refinement. We highly recommend wearing it to a formal event; just imagine the kind of impression you’d make wearing this with a black dress, pearls, and a chignon. Its powerful sillage and exceptional longevity guarantee you’ll attract attention.

4. Aramis Always for Her – Best Aramis Perfume for Women

Released in 2006, Aramis Always for Her is Calligraphy Rose’s fresher, lighter cousin. It splashes open with notes of watercress and mandarin orange, which blend gently into delicate middle notes of magnolia, hibiscus, and mignonette. At its end, Always for Her dries to base notes of exotic woods, smoky incense, and creamy milk.

Always for Her is a great choice for a sweet, feminine woman who wants to worship her own femininity. The zingy citrus and dewy floral notes make it a perfect choice for the summertime. Due to the strong sillage, we recommend wearing it to outdoor events where you can make an impression without overwhelming those nearby.

The nautical blue and white bottle let you know what to expect from this cologne. Similar to how Tuscany brings the lush Mediterranean to mind, New West for Him is reminiscent of a windswept briny beach. The first spray reveals refreshing top notes of seawater, mint, and bergamot, tempered by woody middle notes of pine, juniper, and bay leaf. These are nestled on a base of cedar, oakmoss, and leather accord.

New West is powerful and long-lasting enough to stand up to heat, rain, sweat – any elements the outdoors can throw at it. Spritz it on for an extra touch of masculinity before your next outdoor adventure. Its subtle and inoffensive sillage will inspire and refresh you without offending anyone else.

Aramis Devin recreates the scent of the outdoors and puts it into one thick, masculine bottle. It begins with verdant top notes of galbanum and artemisia, while soapy aldehydes bubble beneath the surface. These give way to a heart of pine and carnation garnished with cinnamon. Base notes of leather accord, patchouli, and amber linger on the skin long after the other notes have dried.

Devin is described as a “chypre” cologne, meaning that it’s layered with citrus notes on top and earthy notes on the bottom. The overall effect is rugged, masculine, and authentically outdoorsy. The scent will cling to your skin and clothes all day, and it has a strong pull so you’re guaranteed to get attention.

Aramis Special Blend joined the Aramis lineup in 2019. Its classically beautiful gold bottle gives a nod to the elegance and luxury of past Aramis scents, but the blend it contains is completely new. This rich and spicy scent begins with tantalizing cinnamon and bergamot, laced with the herbaceous scent of clary sage. These rest on woody and sophisticated middle notes like whiskey and nagarmotha. The scent ends with warm base notes of cashmere, cedar, and tonka bean.

Special Blend has limited sillage and strong longevity. This makes it perfect for settings like the office, road trips, and anywhere else you may find yourself in close quarters with other people. The cozier notes like whiskey, cashmere, and cedar make it particularly beautiful for the fall season.

$65.00 at Amazon.com
at Fragrancenet.com

If a trip to Cuba had a scent, it would be Havana. Released in 1994, this men’s cologne is alluring and adventurous. It begins with spicy notes of basil and caraway topped with a bright splash of mandarin orange. Middle notes of tobacco, cinnamon, and fir, plus base notes of patchouli, oakmoss, and vetiver, ground the spice and add a rich earthiness.

Havana’s everlasting longevity makes it a great “signature scent.” Depending on your skin chemistry, a little can go a long way – but regardless, one or two sprays should be enough for all-day fragrance. The diverse notes in this blend mean it’ll fit beautifully with every season, every climate, and every setting.

Commonly referred to as a “fresh spicy” cologne, Aramis Voyager begins with tingly ginger, black pepper, and juniper berries. These swirl with airy middle notes like lavender and sage, which blend gently into base notes of nutmeg and tonka bean. The overall effect is bracing and clean, marrying the adventurousness of scents like Devin and Tuscany with the freshness of Aramis or Special Blend.

Voyager has the most subtle sillage of any Aramis fragrance. This makes it ideal for the office as it will stay close to you and boost your confidence without bothering others. It also has shorter longevity than most Aramis fragrances, so keep an extra bottle on your desk to top off throughout the day.

at Amazon.com
at Perfume.com
at Fragrancenet.com

Aramis 900 is a rich and sensual fragrance that men and women can enjoy. Opening notes like coriander and Brazilian rosewood lean a little bit more masculine, while feminine middle notes like jasmine, rose, and carnation gives it a floral heart. Base notes of sandalwood, amber, and patchouli linger on the skin long after the rest have dried.

A scent like Aramis 900 fits best in romantic settings. Its sillage is on the stronger side, meaning you’ll catch attention when you’re leaning in close to your date. It’s powerful enough to stay all day, all night, and if things go well enough, even into the next day…

A Guide on How to Choose Your Aramis Perfume

When choosing an Aramis fragrance, think about two things: the fragrance family (or families) you like, and the scent concentration you’re after. This will help you choose a fragrance you enjoy at a strength and longevity that fits your taste.

Woody fragrances smell rich and masculine. They contain notes like leather accord and whiskey, as well as various “-wood” notes. Woody Aramis fragrances include:

Scent concentration refers to how strong and noticeable a scent is. Concentrations are classified depending on what percentage of the scent blend is pure perfume oil.

Eau de colognes (EDCs) are three to eight percent perfume oil, and thus are more subtle. They also have a light and citrusy scent to them that other perfumes of a similar concentration might not have. Aramis EDCs include:

Eau de toilettes (EDTs) are five to fifteen percent perfume oil. They’re decently powerful, but not as strong or long-lasting as perfumes with more perfume oil. Aramis EDTs include:

Eau de parfums (EDPs) are ten to twenty percent perfume oil. These are some of the strongest and longest-lasting fragrances on the market. Aramis EDPs include:

What does the name Aramis mean?

Aramis a popular French name. It’s most famous for being the alias of Rene d’Herblay, a fictional swordsman from the classic novel The Three Musketeers.

How much is Aramis perfume?

Aramis fragrances have an average retail price of $55.00 a bottle.

Which Aramis perfume is best?

If you’re new to Aramis, choose a time-tested fragrance if you want the “best.” Scents like Aramis by Aramis, Aramis 900, and Aramis Devin have entranced and captivated fans for decades. Try one of them to see what all the fuss is about.

Aramis fragrances can fit all manner of personal tastes. But most of their scents have a distinctly “woody” aroma due to notes like sandalwood, cedar, or Brazilian rosewood.

Is Aramis a good cologne?

Aramis is a very good cologne. They made a splash upon their introduction thanks to their high-quality fragrances, and have only grown and improved in the years since.

The Story of Aramis

The world-famous Estee Lauder company founded Aramis in 1963. Their goal was to introduce premium men’s colognes and grooming products to the beauty market, which had traditionally been saturated by women. In fact, Aramis by Aramis was the very first men’s fragrance to ever be sold in department stores. This was accompanied by twenty grooming products, such as aftershave, shaving cream, and soap, all in the Aramis by Aramis scent.

Aramis has worked with some of the most famous and renowned perfumers in the world. Here are just a few of the notable noses that have partnered with Aramis to create their timeless fragrances.

The future of Aramis is bright, and we’re excited to see what perfumers they work with in the future.

Fragrances and grooming products can be alienating for men. Thankfully, bands like Aramis make it easy to access high-quality, powerful scents you’ll love to wear. With their spicy, woody notes and classic packaging, Aramis colognes pay subtle homage to masculinity, ruggedness, and adventure.