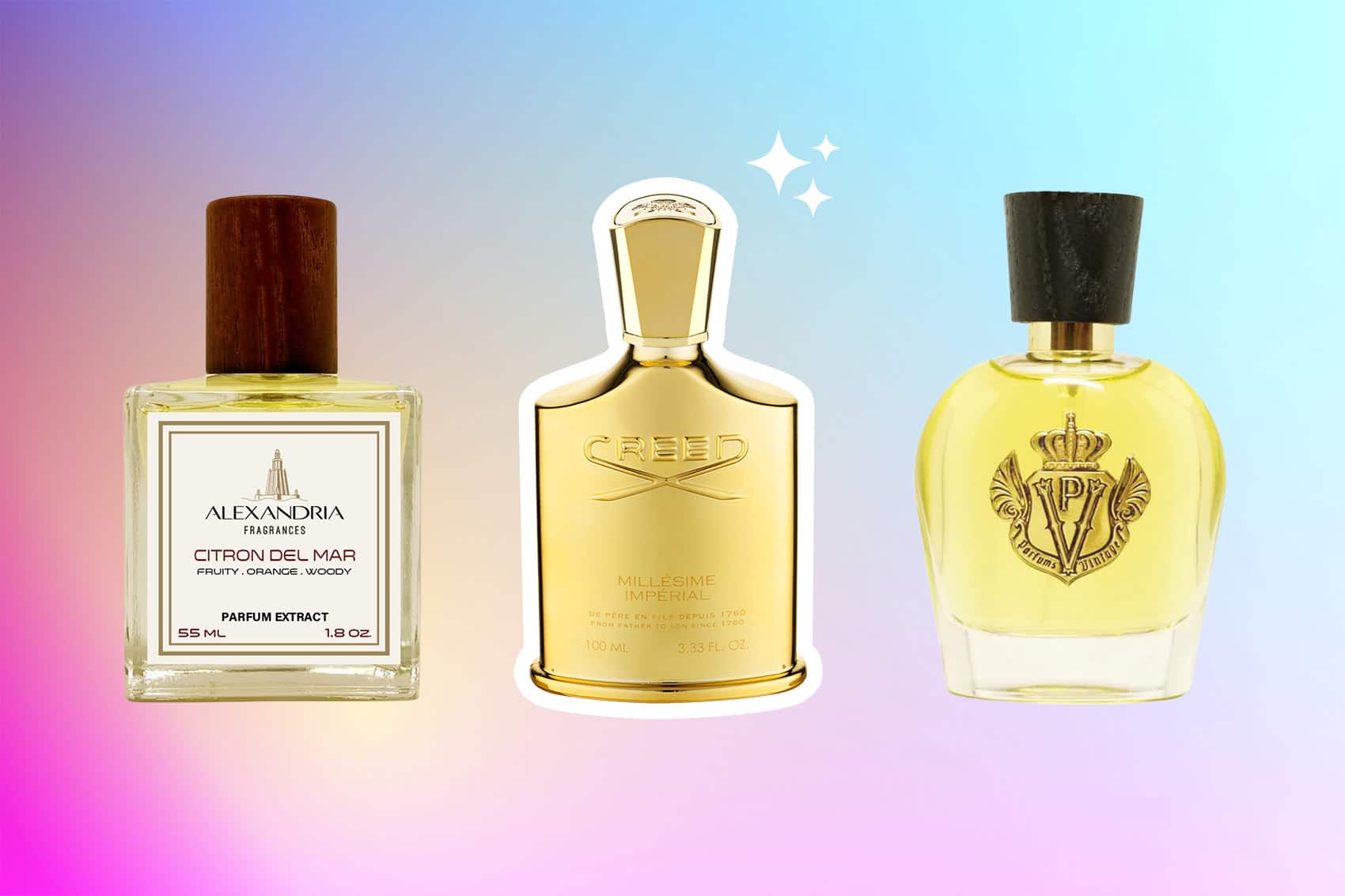 Creed Millesime Imperial is a woody musky fruity fragrance that has a character all of its own. But that doesn’t mean that other brands haven’t attempted to make some pretty impressive clones.

If you’re looking for a way to wear Millesime Imperial without the eye-watering price tag, then clones are the way to go. Finding a good one isn’t always easy but we’ve done the hard work for you.

We’ve picked some of the best perfumes similar to Creed Millesime Imperial and we’ve been massively impressed by how close some of them come. We know you’re going to love getting that iconic fragrance for a fraction of the cost.

Millesime Imperial is a unisex fragrance for men and women from fragrance powerhouse, Creed. Known for its luxurious, high-end perfumes, Creed is the go-to choice for the rich and famous.

This intoxicating perfume is designed to stir up images of walks along a Sicilian beach, of romance, and of summer. But there’s a beautiful warmth to Millesime Imperial that you don’t always get from other summer fragrances. The rich woodiness of the perfume causes the senses to dive much deeper as layer upon layer of uniqueness comes through.

Opening, Millesime Imperial treats us to heavenly fruity notes coupled with sea salt; an odd blend yet one that works perfectly well. Moving through the heart, Millesime Imperial brings forth its freshness with citrus notes of mandarin orange, bergamot, and lemon which are complemented by the light floral notes of iris.

As Millesime Imperial dries down to the base, those beautiful woody notes come through alongside seawater and musk. The combination of rich woods and the freshness of the seawater mingle effortlessly with the musky sweetness.

But Millesime Imperial is not an overpowering perfume. It’ll delicately project around a space without offending.

What’s surprising is that, unlike many other high-end fragrances, Millesime Imperial doesn’t last as long on the skin. That said, it still remains a firm favorite among Creed fans, especially the earlier batches which are known for their prominent salty opening.

Now let’s take the parts we like from Creed Millesime Imperial and look at what our current favorite clones are.

When you are in for an affordable clone of Millesime Imperial, Club de Nuit Milestone is an amazing option. This is a fragrance for women so it doesn’t have the unisex versatility of the original but it certainly has a lot to offer.

Club de Nuit Milestone is a woody fruity fragrance bursting with seat notes, red berries and bergamot at the head. This is similar to the character of Millesime Imperial without being a direct copy. The heart is woodier than zesty giving CDN its own personality before drying down to a sweet musky base.

You’ll get much of the same vibe as Millesime Imperial but I notice a distinctly feminine and passionate character to this fragrance that makes it a great all-rounder. It’s definitely suited to many more occasions than the original so is excellent as a signature.

What’s more, it boasts far superior longevity, so you won’t need to keep applying throughout the day.

There is nothing that comes as close to mimicking Millesime Imperial as Citron Del Mar. Now, Alexandria Fragrances is known for its dupes and it does them well but this is a perfect match.

The notes through the entire composition are exactly the same as Creed Millesime Imperial and fans have been raving about how good this is. We are inclined to agree and not only because of the distinctly similar accords but because of superior longevity and projection.

Citron del Mar is marketed as a unisex fragrance so it’s just as versatile as the original. It’s elegant, fresh, and sensual and makes the perfect choice for a vacation or a date on a summer’s day.

We really struggled to find anything we didn’t like about Citron del Mar; it’s generally a super impressive fragrance. However, the only real downside, and it’s minor, is that you don’t get the luxury packaging that some people like to display on the vanity unit.

The Love and Luck collection from Ed Hardy features both men’s and women’s fragrances. Many perfume fans have noted the moderate similarities between the men’s fragrance and Millesime Imperial.

Now, we have to point out that this isn’t an exact dupe but for those who like the fruity, musky vibe of Creed, it’s a good choice. You don’t get those salty notes, which for many, are the key to Millesime Imperial. So, if that’s an aspect you like, perhaps give this one a miss.

But there are heady notes of musk and wood at the base just like Creed and those all important citrus accords through the head and heart.

This is a very affordable clone so don’t expect huge things in terms of longevity. Don’t get me wrong, it’ll last through the day, but if you’re heading straight for drinks after work, you’ll probably need another spritz.

Millesime Imperial is a relatively simple composition. It blends just the most important notes to make an elegant and luxurious fragrance. However, if you want something that is much louder and vibrant yet remarkably similar, we’d urge you to try this.

Unforgivable by Sean John has many of the prominent notes found in MI with some complexities thrown in for good measure. Take the opening, for example, citrus accords sit happily alongside basil and juniper melting into an earthy lavender heart. The base is similar to Creed with woody notes but this is complemented by rum, amber, and cashmere wood.

This is a perfume that certainly has its own unique character but also pays homage to the well-loved MIllesime Imperial. But what we really love is the projection. Unforgivable floats effortlessly around the room without overpowering making it a great everyday fragrance.

The catch? It’s designed for men but we’ve seen a lot of women who are just as happy to wear it.

You’d be forgiven for thinking this was a Diptyque original if you took just a quick glance at the bottle. But look a little more closely and you’ll begin to notice the obvious similarities between Rush of Unicorns and Millesime Imperial.

Much like Unforgivable, Rush of Unicorns is a more complex and detailed take on the Creed favorite. This makes it a great choice for people who prefer a more intense and varied scent.

The fragrance opens, as you would expect with sea salt giving it that MI quality that makes it instantly stand out. This note is coupled with melon and lemon which dries into a heart of bergamot, mandarin orange, and iris; just like Millesime Imperial. The only difference here is the addition of lavender and blackcurrant.

Rush of unicorns has that all important woody base coupled with amber for something incredibly warm and rich. It boasts a hugely luxurious feel which tricks you into thinking you would be wearing something as high-end as Creed for a far cheaper price.

It’s unisex, incredibly long-lasting, and projects like a dream; one of our favorite dupes.

For many people, it is the sweeter aspects of Millesime Imperial that make it what it is. If you’re not keen on the salty qualities, then Banho de Energia might be just what you’ve been searching for.

This fragrance opens with those fruity notes minus the salt for a much sweeter and more youthful start. Perhaps for younger wearers looking for a summer fragrance, Banho de Energia would be just right.

The heart features floral notes similar to MI but doesn’t have the citrus accords we have come to know and love. As the fragrance dries down, you are treated to a musky, woody base that is hugely reminiscent of Millesime Imperial.

Banho de Energia is designed for men and women even if the bottle feels a little more feminine. But it’s what is inside that really counts.

We were desperately impressed by the projection of this perfume.  While the Creed original doesn’t project quite as strongly as you’d expect, this one fills a room and announces your presence with great ease. A good choice for people who aren’t afraid to be bold.

Osaito by M. Micallef is a citrus aromatic fragrance that has a lot of similar qualities to Creed Millesime Imperial making it one of the most popular dupes. It isn’t an exact copy and the composition is slightly more complex but it does feature many of the key notes.

Beginning with citrus accords and sea notes, you could be fooled into thinking that this was MI. You find a floral heart, however, that is vastly different and gives Osaito its own personality. It’s made up of myrtle and marigold with no iris in sight.

After fully drying down, Osaito reveals woods and musk alongside amber which seems to be a popular choice for MI clones. It’s rich and warm and feels just as luxurious as the original. Plus, it lasts far longer on the skin so you won’t need to keep topping it up throughout the day.

As A Final Note

Before we leave you with your choice, I want to emphasize that to get a similar fragrance, you must assess the fragrance notes before purchasing. Creed Millesime Imperial has a very unique blend of accords with a salty, fruity head that moves through fresh citrus and florals into a woody base with hints of sea salt.

While you might not be able to find an exact replica, there sure are many that come surprisingly close. What’s great about using a dupe is that if there are certain aspects of Millesime Imperial that you don’t like, you can remove these. For example, some people find the saltiness a little too much but there are plenty of clones, such as Ed Hardy Love and Luck that don’t include this.